Residents of "the Sponge" have made a tradition of playing a unique sport that will leave you on the edge of your ... scooter.
Watch Video
MIT News Office
Publication Date: 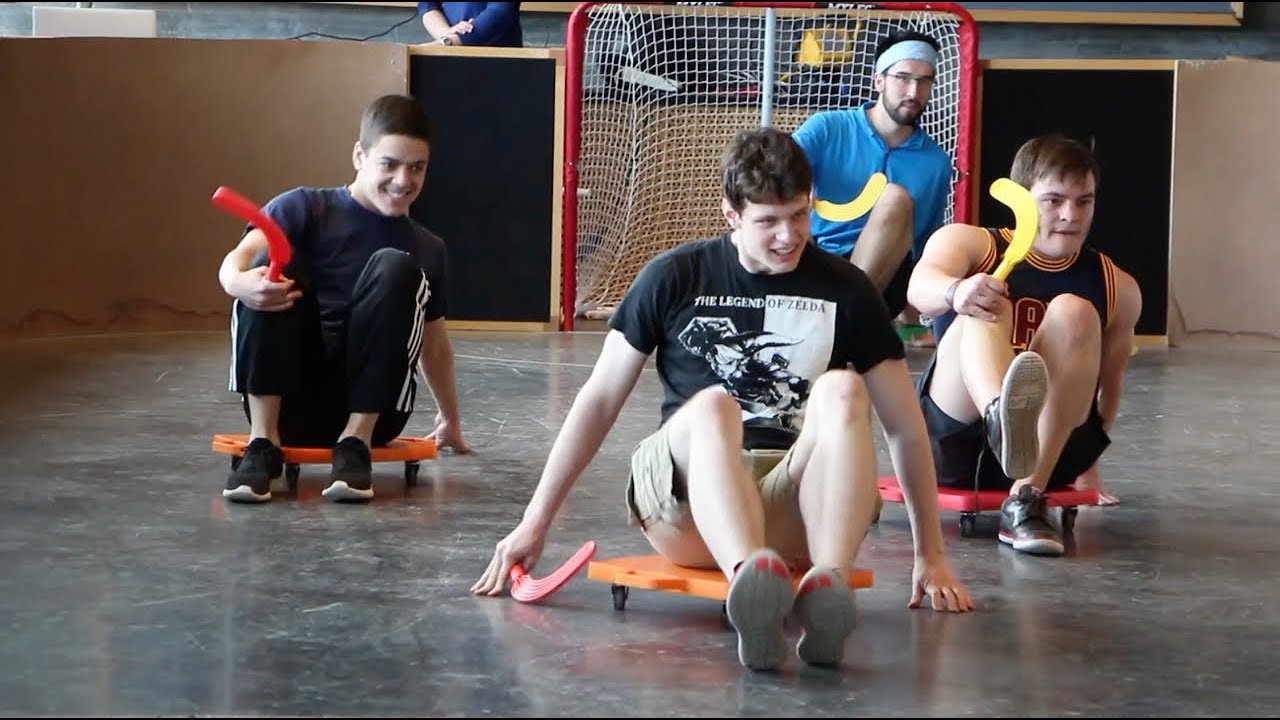 On a quiet Sunday afternoon in April, pedestrians walking down Vassar Street past Simmons Hall — a.k.a. the Sponge — were treated to a unique look at MIT culture. Unlike the usual snacking students they would normally have seen, passers-by peering through Simmons' dining hall windows witnessed a crowd of undergraduates dressed in pastel tutus, feather boas, and propeller hats. The students cheered and honked — annoyingly — on vuvuzelas as their peers, perched on the kind of plastic scooters most often seen in elementary school gym classes, scuttled after colored hockey pucks.

The students of Simmons Hall had cleared away the tables in their dining hall to form SimDin Arena, the playing field for their proud sport. As the set up was completed, participants gathered to sing the Simmons Hall anthem, “O Spongey-Sponge” (sung to the tune of “O Canada,” and referencing the building’s unique architecture). Once the dorm’s praises had been sung, the competition began.

Scootah Hockey is simple. Players sit on plastic scooters and use small paddles to hit a hockey puck into the opposing team’s goal. The most important rule of Scootah Hockey is to stay on one’s scooter, which the referees constantly reiterate by shouting, “On your scooter!”

The April 8 championship was organized into brackets, and teams played against each other until the final two were left to compete head-to-head. The prize? A scooter with each year’s winning team memorialized on plaques to be kept until the next championship.

This year’s champs were from C-Tower. Senior Garrison Snyder spoke about the final moments leading up to their win. “It was tied up, overtime, next shot wins it. I saw the puck in my field of vision and I just knew I had to slap it in. It went into the far side of the net and there was the goal, there was the game,” he said. “The championship title for C-Tower. Couldn’t have done it without the team, though.”

Scootah Hockey has been a Simmons Hall tradition since 2014 and has been elaborated on by the residents ever since. In recent years, students have given more structure to the sport, including the founding of the Federation d’International du Scootah Hockey and Sports That Inquire Cool Kids (FISHSTICK), establishing commissioners of Scootah Hockey, and creating the Every Scootah Hockey Person’s Network (ESHPN), which provides highlights and statistics.

Sophomore Nicolas Arons, FISHSTICK’s current commissioner, was inspired by last year’s commissioner, Evan Denmark, to bear the responsibility and honor of organizing the game. “He was one of the absolute funniest people I have ever met,” he said. “He would come out wearing [spandex] in bright neon colors and the shortest shorts you’ve ever seen and he’d just do ridiculous stuff to make people have fun. So that’s something I learned from him — to try to be ridiculous and to let ourselves be kids again.”

Arons said he was immediately drawn into the game’s playful competition during his first year at MIT. “I was pretty involved with Scootah Hockey. That’s sort of why I was chosen to become the next commissioner, because I really liked it and I really enjoyed the atmosphere,” he said. “Everyone is rooting for their section, but they’re all doing it for fun. It’s not super aggressive or competitive, because it’s sort of a ridiculous sport.”

Arons said the best part of Scootah Hockey is the feeling of community the game inspires.

“I think it really brings together the whole dorm,” he said. “You have all of these different groups and you get to make friends with people you might not have gotten to know and have fun with them.”