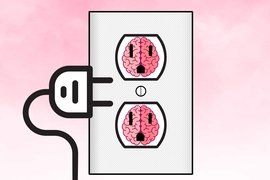 ↓ Download Image
Caption: A team of MIT engineers has developed a “smart power outlet” in the form of a device that can analyze electrical current usage from a single or multiple outlets.
Credits: Image: Christine Daniloff, MIT

Caption:
A team of MIT engineers has developed a “smart power outlet” in the form of a device that can analyze electrical current usage from a single or multiple outlets.
Credits:
Image: Christine Daniloff, MIT

Have you ever plugged in a vacuum cleaner, only to have it turn off without warning before the job is done? Or perhaps your desk lamp works fine, until you turn on the air conditioner that’s plugged into the same power strip.

These interruptions are likely “nuisance trips,” in which a detector installed behind the wall trips an outlet’s electrical circuit when it senses something that could be an arc-fault — a potentially dangerous spark in the electric line.

The problem with today’s arc-fault detectors, according to a team of MIT engineers, is that they often err on the side of being overly sensitive, shutting off an outlet’s power in response to electrical signals that are actually harmless.

Now the team has developed a solution that they are calling a “smart power outlet,” in the form of a device that can analyze electrical current usage from a single or multiple outlets, and can distinguish between benign arcs — harmless electrical spikes such as those caused by common household appliances — and dangerous arcs, such as sparking that results from faulty wiring and could lead to a fire. The device can also be trained to identify what might be plugged into a particular outlet, such as a fan versus a desktop computer.

The team’s design comprises custom hardware that processes electrical current data in real-time, and software that analyzes the data via a neural network — a set of machine learning algorithms that are inspired by the workings of the human brain.

In this case, the team’s machine-learning algorithm is programmed to determine whether a signal is harmful or not by comparing a captured signal to others that the researchers previously used to train the system. The more data the network is exposed to, the more accurately it can learn characteristic “fingerprints” used to differentiate good from bad, or even to distinguish one appliance from another.

Joshua Siegel, a research scientist in MIT’s Department of Mechanical Engineering, says the smart power outlet is able to connect to other devices wirelessly, as part of the “internet of things” (IoT). He ultimately envisions a pervasive network in which customers can install not only a smart power outlet in their homes, but also an app on their phone, through which they can analyze and share data on their electrical usage. These data, such as what appliances are plugged in where, and when an outlet has actually tripped and why, would be securely and anonymously shared with the team to further refine their machine-learning algorithm, making it easier to identify a machine and to distinguish a dangerous event from a benign one.

“By making IoT capable of learning, you’re able to constantly update the system, so that your vacuum cleaner may trigger the circuit breaker once or twice the first week, but it’ll get smarter over time,” Siegel says. “By the time that you have 1,000 or 10,000 users contributing to the model, very few people will experience these nuisance trips because there’s so much data aggregated from so many different houses.”

Siegel and his colleagues have published their results in the journal Engineering Applications of Artificial Intelligence. His co-authors are Shane Pratt, Yongbin Sun, and Sanjay Sarma, the Fred Fort Flowers and Daniel Fort Flowers Professor of Mechanical Engineering and vice president of open learning at MIT.

To reduce the risk of fire, modern homes may make use of an arc fault circuit interrupter (AFCI), a device that interrupts faulty circuits when it senses certain potentially dangerous electrical patterns.

“All the AFCI models we took apart had little microprocessors in them, and they were running a regular algorithm that looked for fairly primitive, simple signatures of an arc,” Pratt says.

Pratt and Siegel set out to design a more discerning detector that can discriminate between a multitude of signals to tell a benign electrical pattern from a potentially harmful one.

Their hardware setup consists of a Raspberry Pi Model 3 microcomputer, a low-cost, power-efficient processor which records incoming electrical current data; and an inductive current clamp that fixes around an outlet’s wire without actually touching it, which senses the passing current as a changing magnetic field.

Between the current clamp and the microcomputer, the team connected a USB sound card, commodity hardware similar to what is found in conventional computers, which they used to read the incoming current data. The team found such sound cards are ideally suited to capturing the type of data that is produced by electronic circuits, as they are designed to pick up very small signals at high data rates, similar to what would be given off by an electrical wire.

The sound card also came with other advantages, including a built-in analog-to-digital converter which samples signals at 48 kiloherz, meaning that it takes measurements 48,000 times a second, and an integrated memory buffer, enabling the team’s device to monitor electrical activity continuously, in real-time.

In addition to recording incoming data, much of the microcomputer’s processing power is devoted to running a neural network. For their study, they trained the network to establish “definitions,” or recognize associated electrical patterns, produced by four device configurations: a fan, an iMac computer, a stovetop burner, and an ozone generator — a type of air purifier that produces ozone by electrically charging oxygen in the air, which can produce a reaction similar to a dangerous arc-fault.

The team ran each device numerous times over a range of conditions, gathering data which they fed into the neural network.

“We create fingerprints of current data, and we’re labeling them as good or bad, or what individual device they are,” Siegel says. “There are the good fingerprints, and then the fingerprints of the things that burn your house down. Our job in the near-term is to figure out what’s going to burn down your house and what won’t, and in the long-term, figure out exactly what’s plugged in where.”

After training the network, they ran their whole setup — hardware and software — on new data from the same four devices, and found it was able to discern between the four types of devices (for example, a fan versus a computer) with 95.61 percent accuracy. In identifying good from bad signals, the system achieved 99.95 percent accuracy — slightly higher than existing AFCIs. The system was also able to react quickly and trip a circuit in under 250 milliseconds, matching the performance of contemporary, certified arc detectors.

Siegel says their smart power outlet design will only get more intelligent with increasing data. He envisions running a neural network over the internet, where other users can connect to it and report on their electrical usage, providing additional data to the network that helps it to learn new definitions and associate new electrical patterns with new appliances and devices. These new definitions would then get shared wirelessly to users’ outlets, improving their performance,and reducing the risk of nuisance trips without compromising safety.

“The challenge is, if we’re trying to detect a million different devices that get plugged in, you have to incentivize people to share that information with you,” Siegel says. “But there are enough people like us who will see this device and install it in their house and will want to train it.”

Beyond electrical outlets, Siegel sees the team’s results as a proof of concept for “pervasive intelligence,” and a world made up of everyday devices and appliances that are intelligent, self-diagnostic, and responsive to people’s needs.

“This is all shifting intelligence to the edge, as opposed to on a server or a data center or a desktop computer,” Siegel says. “I think the larger goal is to have everything connected, all of the time, for a smarter, more interconnected world. That’s the vision I want to see.”

Let your car tell you what it needs