Caption:
Edward Lorenz was a meteorologist and professor in the former Department of Meteorology.
Credits:
Courtesy of MIT Museum

Our understanding of atmospheric and climate dynamics, as well as weather prediction and its limits, would not be what it is today without advances in the fundamental science of modern meteorology that took place at MIT in the post WWII era. Much of this is thanks to two prominent MIT meteorologists born a hundred years ago, but whose work is very much relevant today.

Earlier this month, the Department of Earth, Atmospheric and Planetary Sciences (EAPS) celebrated the lives and scientific legacies of these two former MIT professors, Edward Norton Lorenz and Jule Gregory Charney, during a two-day symposium: MIT on Chaos and Climate. The event was organized by EAPS faculty from the Lorenz Center and the Program in Atmospheres, Oceans and Climate (PAOC), marking the centennial of the scientists’ birth.

The department brought together the MIT community and friends and welcomed back alumni, and former faculty and scientists from EAPS and the former Department of Meteorology (Course XIX). Also invited were respected colleagues from many scientific fields affected by the work of Charney and Lorenz, including oceanography, meteorology, physics, applied mathematics, and climate science. Together, the group composed of biological and professional families shared vignettes and personal testimonials of the scientists on the first day, and discussed the broader impacts that Charney and Lorenz’s research had on the department and the broader community on the second.

Charney and Lorenz were members and chairs of the former Department of Meteorology, which emerged from the country’s first meteorology program founded at MIT by Carl-Gustaf Rossby, considered one of the founders of modern meteorology. In 1983, the department merged with Course XII to become the current EAPS, and was the forefather of PAOC.

The pioneering work of Charney and Lorenz heralded the field of modern meteorology. “It’s fair to say that Jule Charney turned the mystery of the erratic behavior of the atmosphere into a recognizable, although a very, very difficult problem in fluid physics,” said Joe Pedlosky, Woods Hole Oceanographic Institution Emeritus Senior Scientist, on the symposium’s second day. 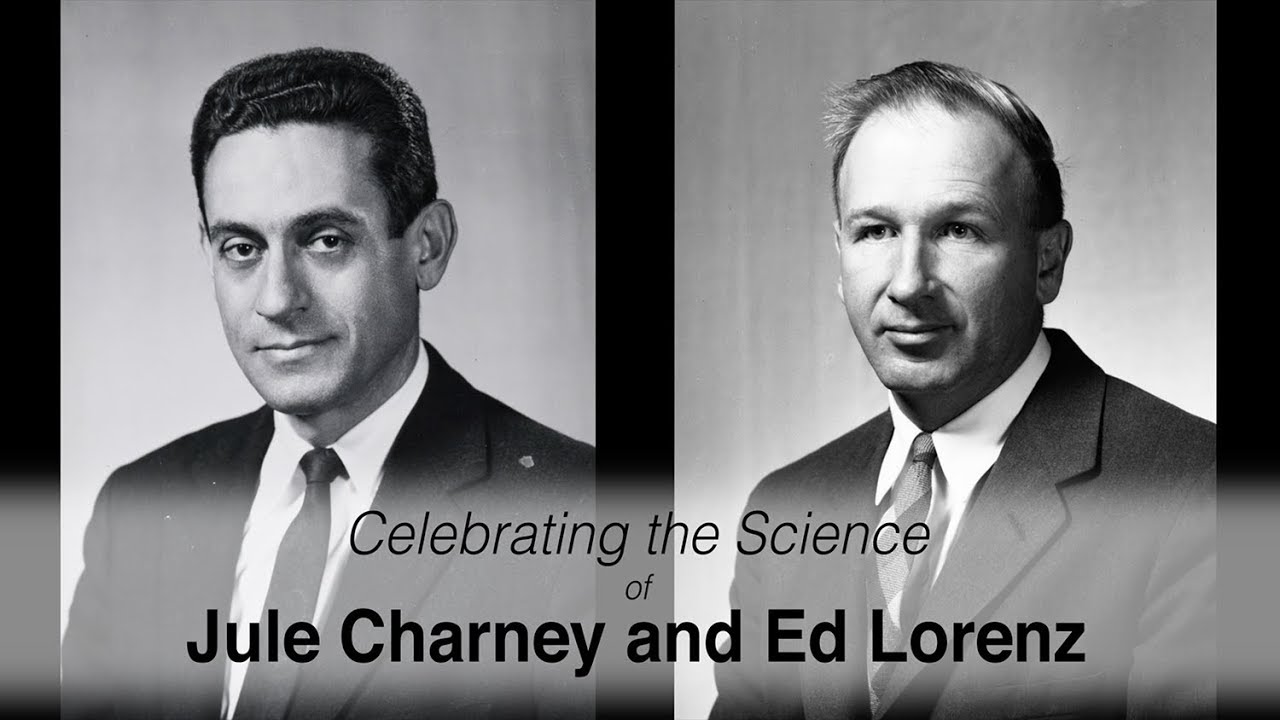 Charney’s quasi-geostrophic vorticity equations allowed for concise mathematical description of large-scale atmospheric and oceanic circulations, enabling the numerical weather prediction. Among this and his many fundamental contributions to the field, Charney identified “baroclinic instability,” the mechanism that explains the size, structure, and growth rate of mid-latitude weather systems, and is a ubiquitous phenomenon in rotating, stratified fluids like our oceans and atmosphere. His innovative research provided insights to the theories of weather systems, hydro-dynamical instability, atmospheric wave propagation, hurricanes, drought, desertification, atmospheric blocking, and ocean currents. Many felt the pull of his charisma and academic integrity, falling into “orbit around the Charney sun.” This, along with his idealism and quest for fascinating research results, was the driving force behind many national and international weather initiatives and programs.

Lorenz could be considered Charney’s department foil. Many described him as a quiet, humble soul, and in Charney’s words as remembered by Pedlosky, “Lorenz is a genius with a soul of an artist.”

He revolutionized our understanding of atmospheric dynamics and circulation through research into the energetics of stratified, rotating fluids. In “one of the greatest intellectual advances of our time,” Lorenz set out to show that statistical long-range weather forecasting did not perform as well as numerical forecasting, and in the process observed “deterministic chaos,” facts that were highlighted by talks from Kerry Emanuel, the MIT Cecil and Ida Green Professor of Atmospheric Science and co-director of the Lorenz Center, and Tim Palmer, the Royal Society Research Professor at the University of Oxford.

Lorenz’s meticulous research found that infinitesimal differences in initial conditions produced dramatically different forecasts. Chaos theory, popularized as the butterfly effect, shifted our thinking away from deterministic numerical weather prediction to more probabilistic forecasts. “History may well record that Ed Lorenz had hammered the last nail into the coffin of the Cartesian universe,” Emanuel said. Despite the fact that the results of Charney and Lorenz’s research were largely opposing, Palmer noted that their work is now seamlessly intertwined for the benefit of science and society.

Ripples in weather, climate, and beyond earth science

The symposium, through formal and informal presentations, painted a picture of what meteorology was like under the leadership of Lorenz and Charney, and their influence on other fields of study.

On the symposium’s first day, alumni, colleagues, friends, and family shared personal stories of encounters with Charney and Lorenz, including anecdotes about lesser known research and affiliations like Charney’s work with the Union of Concerned Scientists, the discovery of chaos and the jetstream, the study of storm surge in Venice, and MIT’s connection with meteorology in Italy. Mankin Mak, alum of Lorenz’s group and Professor Emeritus at the Department of Atmospheric Sciences at the University of Illinois, even named the “Charney number” after the scientist. All the while, the camaraderie between the Course XIX alumni and excitement to be back in EAPS was palpable, spilling over into the evening’s dinner and the following day.

The second part of the symposium opened to the public and focused on the influence of Lorenz and Charney’s research. This included talks on cloud aggregation, hydrology and atmospheric coupling leading to desertification, oceanography and a realistic model of the Gulf Stream, observation of the turbulent cascade in nonlinear systems, CO2-related climate change, chaos in our solar system, fluid dynamics of pathogen transmission, tipping points in population dynamics, and more.

First-day attendees experienced the extent of the researchers’ work through multimedia. While a slideshow of Lorenz and Charney played, EAPS graduate students Brian Green, Mukund Gupta, Megan Lickley and Santiago Benavides, as well as postdocs Ed Doddridge, Jon Lauderdale, Chris Follett, and Daniel Koll shared posters of their own research during the morning of the symposium’s first day. Two displays were unveiled, which would be hung outside the EAPS Charney Library, across from Charney’s old office on the 14th floor where this groundbreaking work took place, and on the 18th floor. Lab assistant Bill McKenna set up a replica of the LGP-30 computer and printer that Lorenz used for his renowned calculations and showed how it would have been used. Short films from Meg Rosenberg, a producer and editor at MIT Video Productions, and Josh Kastorf, from the Earth Resources Laboratory in EAPS, established timelines of Lorenz and Charney’s life and work at MIT, and explained the origins and implications of chaos theory, respectively.

Charney had once remarked that a “scientist’s interest in the history of his own field was the first sign of senility,” but Raffaele Ferrari, the EAPS Cecil and Ida Green Professor of Oceanography and chair of PAOC, believes that revisiting the past can provide valuable lessons for future thinking and research. “For the students, it must have been inspirational and helpful to see where this department comes from,” Ferrari says. “You realize [that] the history of this department is quite impressive … and the people were here that created this field. … There is no other department like that, definitely [not] in meteorology, that has ever achieved that kind of leadership intellectually on every level.”

By revisiting the group’s history, students could see the evolution of scientific ideas and the values that made the department what it was and that became part of its legacy. In a sentiment echoed by keynote speaker Ernest Moniz, the MIT Cecil and Ida Green Professor Emeritus of Physics and Engineering Systems and special advisor to the MIT President, basic research is the lifeblood of a successful society in the long-term. “[Lorenz and Charney were] thinking about the fundamentals of the problem with students here at MIT,” he said. This practice of fostering curiosity-driven research now underpins the mission of the Lorenz Center: to understand and predict global climate change. “And [that’s] always that you want — to fundamentally understand the problem and then as a result you can make an impact on the real world, on practical applications.”

Those interested in making a contribution to the Lorenz Center Fund, or to support the renovation of the Charney Library, can contact Angela Ellis at 617-253-5796 or via email: aellis@mit.edu.