“I learned how to be a professor and a university leader at MIT,” says former chancellor and DUSP faculty member.
Steve Bradt | MIT News Office
Publication Date:
Press Inquiries 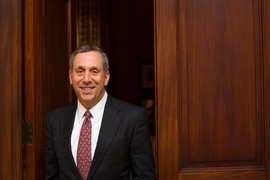 Lawrence S. Bacow ’72, whose 24 years on the MIT faculty culminated in three years of service as the Institute’s chancellor, was named the next president of Harvard University on Sunday afternoon.

Bacow will assume the Harvard presidency on July 1, succeeding Drew Gilpin Faust, who announced last summer that she would step down after 11 years at the post.

“Today, as our two institutions seek to tackle the world’s great challenges, I look forward to working with Larry,” President L. Rafael Reif wrote in a letter today to the MIT community.

Bacow earned his SB in economics from MIT in 1972, returning to serve the Institute from 1977 to 2001 as a faculty member and, eventually, as a member of its senior leadership. He left MIT in 2001 to become president of Tufts University, a position he held for 10 years.

“I learned how to be a professor and a university leader at MIT,” Bacow told MIT News on Sunday evening. “My family’s MIT ties run deep, and they always will.”

Two other members of Bacow’s immediate family are also MIT alumni: His wife, Adele Fleet Bacow, an urban planner, earned her master’s degree in city planning from MIT in 1977. One of the couple’s two sons, Jay Bacow, received his SB in physics from MIT in 2002.

The son of Jewish immigrants from Holocaust-era Europe, Bacow, 66, grew up in Pontiac, Michigan, cultivating avid interests in science and mathematics. As an MIT undergraduate, he was a member of the fraternity Zeta Beta Tau, as well as the Sailing Club and varsity sailing team.

In a 2001 interview with the MIT News Office, Bacow described the central role played by Institute Professor Emeritus Robert Solow in both his undergraduate experience and in the later trajectory of his career.

“I had an extraordinary experience as an undergraduate at MIT,” Bacow said. “As a sophomore, I took a course with Bob Solow, 14.06 (Intermediate Macroeconomics). One day, timidly, I went up to him to ask a question about a footnote to a reading. Bob invited me back to his office to talk. That led to a suggestion that we do a reading course together. So in the second semester of my sophomore year, I got an hour a week, one on one, with one of the foremost economists in the world.” (Solow went on to win the 1987 Nobel Prize in economic sciences.)

“At the end of my junior year, I realized I could graduate, but it was too late to get into law school,” Bacow added. “Bob discouraged me from becoming a lawyer. He tried to get me to stay at MIT in economics. But when I said no, he steered me to the Kennedy School. … Harvard probably accepted me exclusively on the basis of Bob’s recommendation.”

After spending five years at Harvard for his graduate studies — earning a JD and both a master’s degree and a PhD in public policy — Bacow returned to MIT to begin his academic career. Again, Solow’s guidance was pivotal, steering Bacow away from a Washington job in the new Carter administration.

In his 2001 interview, Bacow recalled Solow saying, “The government will always be ready and waiting when you’re ready. Teach for a few years; you may like it.”

Bacow joined the faculty of the Department of Urban Studies and Planning (DUSP) in 1977. Over the course of his career, he has written on environmental policy, bargaining and negotiation, economics, law, and public policy; he is noted particularly for his expertise on the resolution of environmental disputes. While on the MIT faculty, Bacow held visiting professorships at universities in Israel, Italy, Chile, and the Netherlands.

Bacow ultimately became the Lee and Geraldine Martin Professor of Environmental Studies in DUSP, helping to establish both the MIT Consortium on Global Environmental Challenges and the MIT Center for Real Estate. The latter, founded in 1984, was the first such academic center in the United States.

“The real estate capital market accounts for a significant portion of the entire capital stock of this country, but it was little studied, there was no tradition of research, and no place to go to hire people who understood the industry,” Bacow recalled in 2001. Dozens of other universities have since established similar centers.

Bacow’s first Institute-level leadership role came as chair of the MIT faculty, from 1995 to 1997.

“That put me in the thick of things,” he recalled several years later. “Most of us as faculty spend our time tunneling down deeply into our respective disciplines. We know our faculty neighbors, both intellectually and geographically. But we really don’t get to know other faculty. The wonderful thing about being chair of the faculty is that I got to know colleagues from throughout the Institute.”

Citing Solow’s influence on his own undergraduate experience and career, Bacow described his approach to his work as MIT’s chancellor as knitting together the academic, campus life, and residential aspects of the student experience at MIT.

While Bacow was chancellor, MIT began work on Simmons Hall; Bacow pushed for five faculty residences within the building. He supported the development of community space on campus, including the Zesiger Sports and Fitness Center, where students and faculty might interact outside of the classroom.

As chancellor, Bacow also increased support for the Undergraduate Research Opportunities Program (UROP), which fosters research partnerships between MIT undergraduates and faculty. Today, the program has become a signature of undergraduate education at MIT, with 90 percent of graduating seniors having participated in at least one UROP project.

“It was clear from the moment Larry Bacow became chair of the faculty at MIT that he is someone with a deep commitment to academic excellence, for whom students matter a great deal, and with a very broad perspective across disciplines,” physicist Robert J. Birgeneau, who served as dean of MIT’s School of Science while Bacow was chair of the faculty and then chancellor, told the Harvard Gazette. “Successful university leaders are clear about what their values are, and those values are reflected in how they lead their institutions. Larry has a very well-defined moral compass, which will serve him and Harvard well in the years to come.”

Bacow left MIT in 2001 to become president of Tufts University, a position he held for 10 years. His tenure at Tufts was marked by his dedication to expanding student opportunity; to fostering innovation in education and research; to enhancing collaboration across schools and disciplines; and to spurring consideration of how universities can best serve society.

Upon stepping down from Tufts in 2011, Bacow returned to Harvard as a member of the Harvard Corporation, the university’s board of trustees. He also served as president-in-residence at Harvard’s Graduate School of Education, moving in 2014 to the Harvard Kennedy School as the Hauser Leader-in-Residence in the Center for Public Leadership. He has devoted considerable time between his two university presidencies to advising new and aspiring college and university leaders, mentoring students interested in careers in education, teaching in executive education programs, and writing and speaking about major issues in higher education.

“Virtually everything I’ve done at MIT, I’ve done with others,” Bacow told the MIT News Office shortly before embarking on his first presidency, at Tufts, in 2001. “This is a hard place to leave. I have been blessed with truly magnificent colleagues, both faculty and staff. I will miss them all.”

Bacow looks back on 27 years at MIT