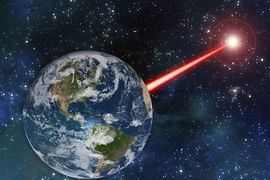 ↓ Download Image
Caption: An MIT study proposes that laser technology on Earth could emit a beacon strong enough to attract attention from as far as 20,000 light years away.
Credits: Image: MIT News

Caption:
An MIT study proposes that laser technology on Earth could emit a beacon strong enough to attract attention from as far as 20,000 light years away.
Credits:
Image: MIT News

If extraterrestrial intelligence exists somewhere in our galaxy, a new MIT study proposes that laser technology on Earth could, in principle, be fashioned into something of a planetary porch light — a beacon strong enough to attract attention from as far as 20,000 light years away.

The research, which author James Clark calls a “feasibility study,” appears today in The Astrophysical Journal. The findings suggest that if a high-powered 1- to 2-megawatt laser were focused through a massive 30- to 45-meter telescope and aimed out into space, the combination would produce a beam of infrared radiation strong enough to stand out from the sun’s energy.

Such a signal could be detectable by alien astronomers performing a cursory survey of our section of the Milky Way — especially if those astronomers live in nearby systems, such as around Proxima Centauri, the nearest star to Earth, or TRAPPIST-1, a star about 40 light-years away that hosts seven exoplanets, three of which are potentially habitable. If the signal is spotted from either of these nearby systems, the study finds, the same megawatt laser could be used to send a brief message in the form of pulses similar to Morse code.

“If we were to successfully close a handshake and start to communicate, we could flash a message, at a data rate of about a few hundred bits per second, which would get there in just a few years,” says Clark, a graduate student in MIT’s Department of Aeronautics and Astronautics and author of the study.

The notion of such an alien-attracting beacon may seem far-fetched, but Clark says the feat can be realized with a combination of technologies that exist now and that could be developed in the near term.

“This would be a challenging project but not an impossible one,” Clark says. “The kinds of lasers and telescopes that are being built today can produce a detectable signal, so that an astronomer could take one look at our star and immediately see something unusual about its spectrum. I don’t know if intelligent creatures around the sun would be their first guess, but it would certainly attract further attention.”

Standing up to the sun

Clark started looking into the possibility of a planetary beacon as part of a final project for 16.343 (Spacecraft, and Aircraft Sensors and Instrumentation), a course taught by Clark’s advisor, Associate Professor Kerri Cahoy.

“I wanted to see if I could take the kinds of telescopes and lasers that we’re building today, and make a detectable beacon out of them,” Clark says.

He started with a simple conceptual design involving a large infrared laser and a telescope through which to further focus the laser’s intensity. His aim was to produce an infrared signal that was at least 10 times greater than the sun’s natural variation of infrared emissions. Such an intense signal, he reasoned, would be enough to stand out against the sun’s own infrared signal, in any “cursory survey by an extraterrestrial intelligence.”

He analyzed combinations of lasers and telescopes of various wattage and size, and found that a 2-megawatt laser, pointed through a 30-meter telescope, could produce a signal strong enough to be easily detectable by astronomers in Proxima Centauri b, a planet that orbits our closest star, 4 light-years away. Similarly, a 1-megawatt laser, directed through a 45-meter telescope, would generate a clear signal in any survey conducted by astronomers within the TRAPPIST-1 planetary system, about 40 light-years away. Either setup, he estimated, could produce a generally detectable signal from up to 20,000 light-years away.

Both scenarios would require laser and telescope technology that has either already been developed, or is within practical reach. For instance, Clark calculated that the required laser power of 1 to 2 megawatts is equivalent to that of the U.S. Air Force’s Airborne Laser, a now-defunct megawatt laser that was meant to fly aboard a military jet for the purpose of shooting ballistic missiles out of the sky. He also found that while a 30-meter telescope considerably dwarfs any existing observatory on Earth today, there are plans to build such massive telescopes in the near future, including the 24-meter Giant Magellan Telescope and the 39-meter European Extremely Large Telescope, both of which are currently under construction in Chile.

Clark envisions that, like these massive observatories, a laser beacon should be built atop a mountain, to minimize the amount of atmosphere the laser would have to penetrate before beaming out into space.

He acknowledges that a megawatt laser would come with some safety issues. Such a beam would produce a flux density of about 800 watts of power per square meter, which is approaching that of the sun, which generates about 1,300 watts per square meter. While the beam wouldn’t be visible, it could still damage people’s vision if they were to look directly at it. The beam could also potentially scramble any cameras aboard spacecraft that happen to pass through it.

“If you wanted to build this thing on the far side of the moon where no one’s living or orbiting much, then that could be a safer place for it,” Clark says. “In general, this was a feasibility study. Whether or not this is a good idea, that’s a discussion for future work.”

Having established that a planetary beacon is technically feasible, Clark then flipped the problem and looked at whether today’s imaging techniques would be able to detect such an infrared beacon if it were produced by astronomers elsewhere in the galaxy. He found that, while a telescope 1 meter or larger would be capable of spotting such a beacon, it would have to point in the signal’s exact direction to see it.

“It is vanishingly unlikely that a telescope survey would actually observe an extraterrestrial laser, unless we restrict our survey to the very nearest stars,” Clark says.

He hopes the study will encourage the development of infrared imaging techniques, not only to spot any laser beacons that might be produced by alien astronomers, but also to identify gases in a distant planet’s atmosphere that might be indications of life.

“With current survey methods and instruments, it is unlikely that we would actually be lucky enough to image a beacon flash, assuming that extraterrestrials exist and are making them,” Clark says. “However, as the infrared spectra of exoplanets are studied for traces of gases that indicate the viability of life, and as full-sky surveys attain greater coverage and become more rapid, we can be more certain that, if E.T. is phoning, we will detect it.”

Graduate student James Clark speaks with Boston Globe reporter Andres Picon about his study that provides evidence laser technology could be used to attract aliens. “A laser produces all of its power in one wavelength,” explains Clark, “so the way that it’s detectable is not that it’s more powerful than the sun, but that it’s very distinct from the sun.”

Writing for Popular Mechanics, David Grossman highlights a feasibility study by MIT researchers that provides evidence that lasers could be used to try to locate aliens. Grossman explains that the light would be targeted toward “areas like Proxima Centauri, the closest star to Earth, and TRAPPIST-1, a star around 40 light-years away with seven exoplanets in orbit.”

Fast Company reporter Melissa Locker writes that a study by MIT researchers examines the feasibility of harnessing laser technology to try to attract the attention of aliens. Locker explains that the researchers found that if contact was made, “lasers could potentially be used to send Morse code-like message via light pulses.”

USA Today reporter Brett Molina writes that MIT researchers have found laser technology could be used to attract the attention of aliens. The researchers found “creating a 1- to 2-megawatt laser focused through a telescope aimed toward space could produce a light strong enough to stand out from the energy produced by the sun."

MIT researchers have found that laser technology could be used to attract attention from alien astronomers, reports Becky Ferreira for Motherboard. The researchers found that amplifying an infrared laser could “produce a signal that would outshine the Sun’s infrared emissions tenfold, an anomaly that would stand out to a smart species observing our solar system from a distant exoplanet.”

UPI reporter Tauren Dyson writes that a new feasibility study by MIT researchers shows that existing laser technology could be used to create a beacon light that could attract attention from as far as 20,000 light years away.