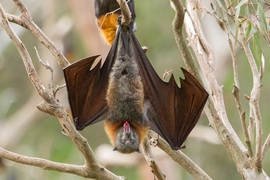 ↓ Download Image
Caption: Animals have evolved all manner of adaptations to get the nutrients they need. For nectar-feeding bats, long snouts and tongues let them dip in and out of flowers while hovering in mid-air. To help the cause, their tongues are covered in tiny hairs that serve as miniature spoons to scoop and drag up the tasty sap.

Caption:
Animals have evolved all manner of adaptations to get the nutrients they need. For nectar-feeding bats, long snouts and tongues let them dip in and out of flowers while hovering in mid-air. To help the cause, their tongues are covered in tiny hairs that serve as miniature spoons to scoop and drag up the tasty sap.

Animals have evolved all manner of adaptations to get the nutrients they need. For nectar-feeding bats, long snouts and tongues let them dip in and out of flowers while hovering in mid-air. To help the cause, their tongues are covered in tiny hairs that serve as miniature spoons to scoop and drag up the tasty sap.

Now engineers at MIT have found that, for bats and other hairy-tongued nectar feeders, the key to drinking efficiently lies in a delicate balance between the spacing of hairs on the tongue, the thickness of the fluid, and the “speed of retraction,” or how fast an animal darts its tongue back to slurp up the nectar. When all three of these parameters are in balance, a good amount of nectar reaches the animal’s mouth instead of dribbling away.

As it happens, the same goes for other hairy-tongued nectar feeders, such as honeybees and honey possums, which the researchers found also exhibit optimal “viscous entrainment,” which refers to the amount of fluid that hairy surfaces can drag up from a bath.

“There are lots of different drinking techniques for animals, and what we think is normal when we drink is really a singular way of drinking,” says Pierre-Thomas Brun, a former instructor in MIT’s Department of Mathematics. “We hope that our theory explains what are the main trending mechanisms of this hairy drinking method, and we believe we have rationalized this peculiar drinking technique.”

Brun, who is now an assistant professor at Princeton University, carried out this current work at MIT with Alice Nasto, a graduate student in MIT’s Department of Mechanical Engineering, and Anette “Peko” Hosoi, professor of mechanical engineering and associate dean of engineering at MIT. The researchers have published their results, which are based on a combination of mathematical modeling and lab experiments, today in the journal Physical Review Fluids.

From beavers to bats

The ways in which fluid flows through a hairy surface has been a continuing research focus in Hosoi’s lab. In 2016, the team fabricated polymer sheets studded with tiny polymer hairs, and studied how these manufactured pelts trapped pockets of air as they were plunged into baths of various fluids. Their results shed light on how beavers use similar pelts to stay warm while diving through water. The work has also inspired the idea of hair-covered wetsuits to keep swimmers dry and warm.

“Once we made these surfaces, we thought, ‘We have this wonderful system on which we can do fluidic experiments — what else is out there that we can model?’” Nasto says.

While looking for her next project, Nasto came upon a study by researchers at Brown University who took high-speed videos of bats drinking nectar from a flower. After analyzing the videos, they found that, as the animal dipped its tongue in and  out of the flower, tiny blood vessels on the hairs of its tongue became engorged with blood, prompting the hairs to stand straight up and drag even more nectar up from the flower.

“Their study looked at the physiology of this drinking behavior but didn’t delve too much into the fluid mechanics of this nectar collection,” Nasto says. “So we thought, that’s where our expertise lies, and we could try to add to this understanding.”

To do so, Nasto and her colleagues carried out experiments to simulate a bat’s dipping tongue. They manufactured long, tongue-like strips of polymer material, lined with small, 3-millimeter-high hairs, similar in dimension to those of actual bats. Each strip was covered with hairs spaced at various densities. The researchers dipped the strips in a bath of silicone oil, taking high-speed videos of the experiments, and then measured the amount of fluid that drained down as they pulled the strip back up.

They developed a mathematical model to describe the relationship between the dimensions of hairs on a surface, the speed at which this surface is dipped in and out of a bath, and the properties of the bath.

As a guide, they looked to the Landau-Levich-Derjaguin, or LLD theory — a mathematical equation that is commonly used to characterize dip coating, and specifically, the thickness of the film that is left on a flat surface after it’s been dipped in a liquid bath. Brun developed a new model to include the influence of a hairy surface, which he anticipated would create much thicker films of liquid than a completely flat surface would.

“We assume the ‘tongue’ is initially filled with liquid, and model how much time it takes for this fluid to fall back in the bath,” Brun explains.

In his new model, Brun also included certain parameters such as the height and spacing of hairs, and then inverted the theory in a sense, to predict the amount of fluid that drained away from a surface, rather than the fluid that remained.

The team found that the model predicted, with reasonable accuracy, the amount of fluid drainage that the researchers measured in their experiments.

To test the model further, Nasto designed a simple experimental cell, consisting of two glass plates sandwiched together at various distances apart. The space between the plates is analogous to the space between hairs, and the flow between the two plates is similar to the flow between a two neighboring hairs. She laid the cell on its side and filled it with fluid, then turned it upright and measured the rate at which the fluid drained out. She repeated the experiment with cells of various spacings and fluids of varying viscosities. The results also matched with what was predicted by the team’s new model.

“The experiments allowed us to be confident that the theory we came up with is a good way to understand how the drainage speed relates to the spacing of the hairs,” Nasto says.

Turning their focus back to nature, the researchers looked to see if their model could predict drinking behaviors of other hairy-tongued nectar feeders. Nasto combed through animal physiology papers and found two other species that exhibit similar drinking behaviors: honeybees, and mouse-like marsupials called honey possums, which are native to Australia.

The team compiled data from these two species, along with bats, including the dimensions of the hairs on their tongues, the speed at which they feed, and the type of nectar they prefer. They plugged all this into their model, and found that all three species are efficient at dragging up nectar without allowing much to drain away.

“They all lie close to the theoretical optimal,” Nasto says. “They have evolved to be good drinkers. And if you think about it, humans can use tools for drinking and other behaviors. But a lot of other animals have to have their tools built into their physiology.”

This research was supported in part by the U.S. Army Research Office.

The surprising physics of cats’ drinking