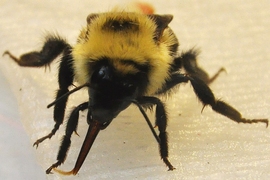 ↓ Download Image
Caption: Researchers find bees get the sweetest nectar by dipping their tongues into the viscous syrup. Pictured is a bumblebee drinking from a sucrose-soaked surface.
Credits: Photo: Wonjung Kim, Tristan Gilet and John Bush 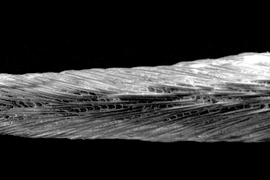 Caption:
Researchers find bees get the sweetest nectar by dipping their tongues into the viscous syrup. Pictured is a bumblebee drinking from a sucrose-soaked surface.
Credits:
Photo: Wonjung Kim, Tristan Gilet and John Bush

Caption:
A scanning electron microscope image reveals a close-up image of the bumblebee’s tongue, designed to entrain, or draw up thick, viscous nectar.
Credits:
Photo: Wonjung Kim, Tristan Gilet and John Bush
A field of flowers may seem innocuous — but for the birds and bees that depend on it for sustenance, that floral landscape can be a battlefield mined with predators and competitors. The more efficient a pollinator is in feeding, the less chance it has of becoming food itself.

Now mathematicians at MIT have found that efficient feeding depends on how sugary a flower’s nectar is, and whether an animal dips or sucks the nectar out. The researchers found that animals such as bees, which probe with their tongues, are “viscous dippers,” and are most efficient when feeding on more sugary, or viscous, nectar. Suction feeders, such as birds and butterflies that draw nectar up through tubes, do their best when sucking up thinner, less sugary nectar.

The difference, says John Bush, a professor of applied mathematics, may point to a co-evolutionary process between flowers and their pollinators.

The researchers published their results in a recent issue of the Proceedings of the National Academy of Sciences.

While Bush is not a biologist, he says curiosities in nature, including nectar feeding, pose fascinating challenges for mathematicians. As he sees it, nectar feeding is a classic example of optimization in nature: The sweeter the nectar, the more energy it delivers, but the more energy it takes to transport. The optimal sugar concentration shifts according to how the fluid is taken up.

As a large-scale analogy, Bush says it’s more efficient to suck up sugar water than molasses through a straw. Conversely, it’s more effective to dip a spoon in and out of honey versus juice. There’s an ideal viscosity for a given uptake mechanism, an optimization puzzle that Bush says is tailored for mathematics.

The birds and the bees

To get at this puzzle, Bush and his colleagues analyzed data from previous papers on nectar-feeding species, which include bats, birds, bees and butterflies. Most papers described two kinds of nectar-drinking mechanisms: active suction, whereby butterflies and moths suck nectar up through long, narrow tubes, or probosci; and passive suction, in which hummingbirds and sunbirds draw nectar up in their tongues via capillary action.

The team compiled the papers’ data and found that both groups of suction feeders were most efficient at taking up the same concentration — 33 percent — of sugar in nectar.

The researchers did the same for viscous dippers: species such as ants, bees and bats, which extract nectar by dipping their tongues in and out of flowers. For these dippers, they found the ideal sugar concentration was 52 percent, demonstrating a preference among these species for nectar that’s much more viscous, and sweeter, than their sucking counterparts.

Going a step further, Wonjung Kim, a graduate student of mechanical engineering and lead author of the paper, took an experimental approach, studying live bees in the lab. Kim collected several bees from around MIT and kept them in a box lined with paper towels soaked in a sugar solution. Kim filmed the bees with a high-speed camera, confirming that the insects did indeed dip their tongues in the syrupy surface.
“I think it’s an interesting finding,” says Steven Childress, an emeritus professor of mathematics at New York University. “He’s painting together the fluid dynamics of feeding, and the energy intake of nectar, in a way that shows the drinking technique is tailored to the viscosity of the nectar itself.”

The findings may have relevance beyond biology, according to David Hu, an assistant professor of mechanical engineering at the Georgia Institute of Technology. Hu, who focuses on the hydrodynamics of water gliders and other species in nature, says Bush’s research may help scientists design effective microfluidic devices. For example, he says, the fluid dynamics of nectar feeding may come in useful in engineering microchips for drug delivery.

“This is pretty rare in biology, to give explicit formulas for how quickly fluid moves up,” Hu says. “This modeling provides a greater level of detail that could be used very easily in a mechanical device, and one could build a robotic insect tongue for a pipette that does something like that.”

Bush and Kim plan to examine the ways in which other species drink, in order to model more small-scale fluid dynamics. One target, Bush says, is a certain desert lizard that “drinks” through its skin. The lizard simply has to step in a puddle of water, and an intricate system of cracks in its skin soaks up moisture — a useful trait in extremely dry environments.

“People are now interested in moving around small volumes of fluid for microfluidic applications,” Bush says. “It’s clear that nature has been solving these problems for millions of years. Animals have learned how to efficiently navigate, transport and manipulate water. So there’s clearly much to learn from them in terms of mechanisms.”