Astronomers detect earliest evidence yet of hydrogen in the universe 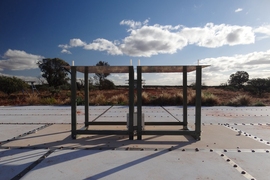 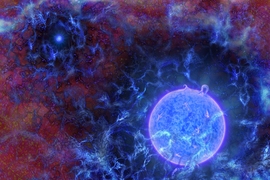 ↓ Download Image
Caption: Artist's rendering of the universe's first, massive, blue stars in gaseous filaments, with the cosmic microwave background (CMB) at the edges. Using radio observations of the distant universe, NSF-funded researchers Judd Bowman of Arizona State University, Alan Rogers of MIT, and others discovered the influence of such early stars on primordial gas. The team inferred the stars' presence from dimming of the CMB, a result of the gaseous filaments absorbing the stars' UV light. The CMB is dimmer than expected, indicating the filaments may have been colder than expected, possibly from interactions with dark matter.
Credits: Image: N.R.Fuller/National Science Foundation 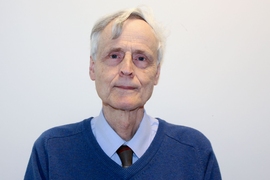 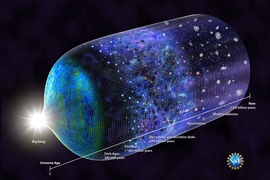 Caption:
Artist's rendering of the universe's first, massive, blue stars in gaseous filaments, with the cosmic microwave background (CMB) at the edges. Using radio observations of the distant universe, NSF-funded researchers Judd Bowman of Arizona State University, Alan Rogers of MIT, and others discovered the influence of such early stars on primordial gas. The team inferred the stars' presence from dimming of the CMB, a result of the gaseous filaments absorbing the stars' UV light. The CMB is dimmer than expected, indicating the filaments may have been colder than expected, possibly from interactions with dark matter.
Credits:
Image: N.R.Fuller/National Science Foundation

In a study published today in the journal Nature, astronomers from MIT and Arizona State University report that a table-sized radio antenna in a remote region of western Australia has picked up faint signals of hydrogen gas from the primordial universe.

The scientists have traced the signals to just 180 million years after the Big Bang, making the detection the earliest evidence of hydrogen yet observed.

They also determined that the gas was in a state that would have been possible only in the presence of the very first stars. These stars, blinking on for the first time in a universe that was previously devoid of light, emitted ultraviolet radiation that interacted with the surrounding hydrogen gas. As a result, hydrogen atoms across the universe began to absorb background radiation — a pivotal change that the scientists were able to detect in the form of radio waves.

The findings provide evidence that the first stars may have started turning on around 180 million years after the Big Bang.

“This is the first real signal that stars are starting to form, and starting to affect the medium around them,” says study co-author Alan Rogers, a scientist at MIT’s Haystack Observatory. “What’s happening in this period is that some of the radiation from the very first stars is starting to allow hydrogen to be seen. It’s causing hydrogen to start absorbing the background radiation, so you start seeing it in silhouette, at particular radio frequencies.”

Certain characteristics in the detected radio waves also suggest that hydrogen gas, and the universe as a whole, must have been twice as cold as scientists previously estimated, with a temperature of about 3 kelvins, or –454 degrees Fahrenheit. Rogers and his colleagues are unsure precisely why the early universe was so much colder, but some researchers have suggested that interactions with dark matter may have played some role.

“These results require some changes in our current understanding of the early evolution of the universe,” says Colin Lonsdale, director of Haystack Observatory. “It would affect cosmological models and require theorists to put their thinking caps back on to figure out how that would happen.”

Rogers’ co-authors are lead author Judd Bowman of Arizona State University (ASU), along with Thomas Mozdzen, Nivedita Mahesh, and Raul Monsalve, from the University of Colorado.

Turning on, tuning in

The antennas and portions of the receiver were designed and constructed by Rogers and the Haystack Observatory team; Bowman, Monsalve, and the ASU team added an automated antenna reflection measurement system to the receiver, outfitted a control hut with the electronics, constructed the ground plane, and conducted the field work for the project. Australia’s Commonwealth Scientific and Industrial Research Organization provided on-site infrastructure for the EDGES project.

The current version of EDGES is the result of years of design iteration and instrument calibration in order to reach the levels of precision necessary for successfully achieving an extremely difficult measurement.

The instrument was originally designed to pick up radio waves emitted from a time in the universe’s history known as the Epoch of Reionization, or EoR. During this period, it’s thought that the first luminous sources, such as stars, quasars, and galaxies, appeared in the universe, causing the previously neutral intergalactic medium, made mostly of hydrogen gas, to become ionized.

Prior to the appearance of the first stars, the universe was shrouded in darkness, and hydrogen, its most abundant element, was virtually invisible, embodying an energy state that was indistinguishable from the surrounding cosmic background radiation.

Scientists believe that when the first stars turned on, they provided ultraviolet radiation that caused changes to the hydrogen atoms’ distribution of energy states. These changes induced hydrogen’s single electron to spin in alignment or opposite to the spin of its proton, causing hydrogen as a whole to “decouple” from the background radiation. As a result, hydrogen gas began to either emit or absorb that radiation, at a characteristic wavelength of 21 centimeters, equivalent to a frequency of 1,420 megahertz. As the universe expanded over time, this radiation became “red-shifted” to lower frequencies. By the time this 21-centimeter radiation reached present-day Earth, it landed somewhere in the range of 100 megahertz.

Rogers and his colleagues have been using EDGES to try to detect hydrogen that existed during the very early evolution of the universe, in order to pinpoint when the first stars turned on.

“There is a great technical challenge to making this detection,” says Peter Kurczynski, program director for Advanced Technologies and Instrumentation, in the Division of Astronomical Sciences at the National Science Foundation, which has provided funding for the project over the past several years. “Sources of noise can be a thousand times brighter than the signal they are looking for. It is like being in the middle of a hurricane and trying to hear the flap of a hummingbird’s wing.”

The instrument, about the size of a small table, sits in a remote region of western Australia where there are very little humanmade radio signals to interfere with incoming radio waves from the distant universe. The antenna detects radio waves from the entire sky, and the researchers had originally tuned it to listen in at a frequency range of 100 to 200 megahertz.

However, when the researchers looked within this range, they initially failed to pick up much of any signal. They realized that theoretical models had predicted that primordial hydrogen should give off emissions within this range if the gas was hotter than the surrounding medium. But what if the gas was in fact colder? Models predict that the hydrogen should then absorb radiation more strongly in the 50 to 100 megahertz frequency range.

“As soon as we switched our system to this lower range, we started seeing things that we felt might be a real signature,” Rogers says.

Specifically, the researchers observed a flattened absorption profile, or a dip in the radio waves, at around 78 megahertz.

“We see this dip most strongly at about 78 megahertz, and that frequency corresponds to roughly 180 million years after the Big Bang,” Rogers says. “In terms of a direct detection of a signal from the hydrogen gas itself, this has got to be the earliest.”

The dip in radio waves was stronger and deeper than theoretical models predicted, suggesting that the hydrogen gas at the time was colder than previously thought. The radio waves’ profile also matches theoretical predictions of what would be produced if hydrogen were indeed influenced by the first stars.

“The signature of this absorption feature is uniquely associated with the first stars,” Lonsdale says. “Those stars are the most plausible source of radiation that would produce this signal.”

“It is unlikely that we’ll be able to see any earlier into the history of stars in our lifetimes,” lead author Bowman of ASU says. “This project shows that a promising new technique can work and has paved the way for decades of new astrophysical discoveries.”

The researchers say this new detection lifts the curtain on a previously obscure phase in the evolution of the universe.

“This is exciting because it is the first look into a particularly important period in the universe, when the first stars and galaxies were beginning to form,” Lonsdale says. “This is the first time anybody’s had any direct observational data from that epoch.”

This research was supported by funding from the National Science Foundation.

Mary Beth Griggs writes for Popular Science about a new Nature study where researchers have identified cold hydrogen dating back to 180 million years post-big bang. “Some of the radiation from the very first stars is starting to allow hydrogen to be seen,” says Alan Rogers of the Haystack Observatory.

The Nature Podcast, hosted by Adam Levy and Shamini Bundell, highlights research from the Haystack Observatory and Prof. Li-Huei Tsai’s findings around Alzheimer’s and its connection to brain waves.

Alan Rogers of MIT's Haystack Observatory co-authored a study that identifies the earliest traces of hydrogen in the universe. The gas is “from 180 million years after the Big Bang,” writes Elise Takahama for The Boston Globe, which suggests that stars would have appeared around this time, creating a “cosmic dawn.”

Hydrogen detected via radio waves by MIT researchers indicates the presence of stars 180 million years after the Big Bang, reports Will Dunham of Reuters. The radio waves also indicate that the universe was likely twice as cold as was previously believe, which Research Affiliate Alan Rogers suggests “might be explained by interaction between the gas and dark matter.”

Seeing black holes and beyond

And then there was light