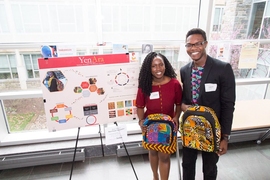 ↓ Download Image
Caption: The YenAra (in Twi, a local language in Ghana, meaning “our very own”) backpacks team, now in AFEP, is developing advanced, functional, yet stylish backpacks that encourage individuals to showcase their creativity through socially responsible ways. Pictured are two of the founders, Sedinam Worlanyo (left) and Bolutife Fakoya, both Swarthmore College alumni, presenting at Swarthmore SwatTank Annual Business and Innovation Competition. The third founder, Yaa Kyeremateng, is a behavioral neuroscience major at Northeastern University.
Credits: Photo courtesy of Swarthmore College 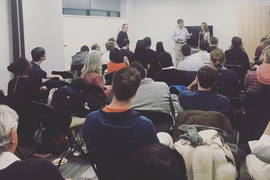 ↓ Download Image
Caption: During the AFEP launch event, each team had two minutes to introduce themselves. 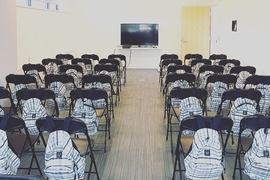 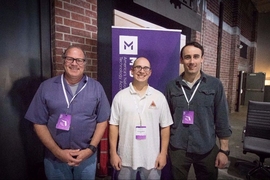 ↓ Download Image
Caption: AFEP team OLGS (One Less Gold Star) is founded by (from left) Wayne Dudding and Ken Rowe, both U.S. Army veterans, and active duty U.S. Marine Christopher Miers. The team is developing an athletic undergarment for soldiers and first responders with embedded tourniquets and sensors. In the event of a traumatic injury, the tourniquets are automatically activated to stop bleeding and increase chances of survival. OLGS was awarded $15,000 during a Department of Defense hackathon and has support from MD5, a national security technology accelerator.

Caption:
The YenAra (in Twi, a local language in Ghana, meaning “our very own”) backpacks team, now in AFEP, is developing advanced, functional, yet stylish backpacks that encourage individuals to showcase their creativity through socially responsible ways. Pictured are two of the founders, Sedinam Worlanyo (left) and Bolutife Fakoya, both Swarthmore College alumni, presenting at Swarthmore SwatTank Annual Business and Innovation Competition. The third founder, Yaa Kyeremateng, is a behavioral neuroscience major at Northeastern University.
Credits:
Photo courtesy of Swarthmore College

Caption:
During the AFEP launch event, each team had two minutes to introduce themselves.

Caption:
AFEP team OLGS (One Less Gold Star) is founded by (from left) Wayne Dudding, a U.S. Army veteran, Christopher Miers, an active duty U.S. Marine, and Ken Rowe, a U.S. Army Veteran. The team is developing an athletic undergarment for soldiers and first responders with embedded tourniquets and sensors. In the event of a traumatic injury, the tourniquets are automatically activated to stop bleeding and increase chances of survival. OLGS was awarded $15,000 during a Department of Defense hackathon and has support from MD5, a national security technology accelerator.

Smart fabrics are poised to change what people expect from their clothing. Promising new fibers and textiles have been developed that can, for instance, connect to the internet, store and convert energy, regulate temperature, monitor health, and change color. And MIT is a leader of this revolution.

In April 2016, the Institute won a bid for $317 million — which consists of $75 million in federal funding and $242 million in nonfederal investments, including large contributions for MIT and the state of Massachusetts — and launched Advanced Functional Fabrics of America (AFFOA). AFFOA is an independent nonprofit company designed to accelerate innovation of U.S.-manufactured smart fibers and textiles. In May 2017, a $2.2 million state grant launched the AFFOA-backed Defense Fabric Discovery Center at the MIT Lincoln Laboratory to serve warfighter functional fabric research and innovation. AFFOA has already released products embodying smart fabric technology, including progammable backpacks and caps.

To further the Institute’s impact, AFFOA has now partnered with MIT Venture Mentoring Service (VMS) to foster a new program that aims to prepare the next generation of smart-fabrics entrepreneurs.

The yearlong Advanced Fabrics Entrepreneurship Program (AFEP) combines AFFOA’s advanced prototyping resources and partnership network of more than 112 organizations with VMS’ mentoring expertise and educational services, to help early-stage entrepreneurs get commercial ventures off the ground. The program will include workshops, lectures, networking events, one-on-one mentoring, and other activities on and around campus.

This week, AFEP launched its inaugural cohort of 24 entrepreneurial teams. The range of participants includes a local former commercial fisherman, members of the armed forces, established entrepreneurs and business owners, college students and researchers from across the nation — and even a team of local eighth-grade students.

“Because initial applications and markets for smart fabrics and textiles have yet to be established, we are casting a wide net,” says Beth Kahn of the MIT Innovation Initiative, who is a key AFEP organizer.

AFEP seeks to inject the nascent smart-fabrics industry with a broad palette of new ideas and an array of consumer applications. This infusion is especially important as consumer demand begins to outpace innovations in the field, says MIT Professor and AFFOA CEO Yoel Fink.

“Consumers want fabrics to move at the speed of digital products. The apparel industry hasn’t kept up with that,” says Fink, a professor of materials science and electrical engineering and a principal investigator at MIT’s Research Laboratory of Electronics (RLE). “We’re creating a system that will spawn a whole bunch of startups around advanced fabrics. Big apparel companies, such as Nike and New Balance, which are partnered with AFFOA, can then see those as opportunities to invest in or to acquire.”

AFFOA’s aim, Fink adds, is to “address the gap where university ends and companies begin. [AFEP] fits neatly into that gap, and I think it’s going to form a fantastic bridge.”

Some of the projects include: printed stretchable batteries, by a team from the University of California at San Diego; a smart bra that can detect early signs of heart disease, by a team from the University of Pennsylvania, University of North Carolina, and MIT; a backpack that alerts users when it’s harmfully overweight, by a team from Swarthmore College and Northeastern University; a sensor-equipped fabric steering wheel that aims to reduce distracted driving, by a local former commercial fisherman; a collar for pet tracking, location, and monitoring, by the company Gloucester Innovation; undergarments for soldiers that detect trauma and activate a tourniquet, by a team affiliated with Harvard Business School, West Point, the National Energy Technology Laboratory, and the U.S. Army; and translucent athletic shoes, by students from Edward Devotion Elementary School in Brookline, Massachusetts.

Participants are expected to travel to required workshops and other events held throughout the year. All AFEP participants must also agree to manufacture only in the United States, which is one of the key pillars of AFFOA’s mission.

AFEP’s structure is based on the successful MIT Translational Fellows Program (TFP), initiated at the RLE and supported by the VMS, RLE, and MIT Innovation Initiative. The program enrolls postdocs from all MIT schools to learn best practices in translating research from the lab to market. So far, 78 fellows have completed the programs, starting more than a dozen companies raising more than $50 million in additional funding.

TFP postdoc projects have run the gamut, from blockchain technologies to beer-brewing innovations and compact fusion generation. AFEP is open to the broader community and targets ventures in advanced fabrics. The program will include exposure to technical expertise, prototyping, and manufacturing capabilities through AFFOA.

Those activities will emphasize lessons learned, through VMS, TFP, and I-Corps: How to learn from customers, establish beachhead markets, build teams, engage with industry, identify technical and market risks, advance commercialization plans, and meet prospective investors. “At the core it’s about asking, ‘Who wants this and why?” Kahn says. “You may have [a technology] that’s cool, and that’s great, but what problem is it solving?”

“If I want to incorporate new things into fabrics, what impact does that have on the whole value and supply chain? [Those types of] questions help entrepreneurs get a sense of value of their product in terms of dollars,” Kahn says.

The entrepreneurs will interact at AFFOA’s state-of-the-art prototyping facility in Cambridge, Massachusetts, which was funded, in part, by MIT and the state. Called the Fabric Discovery Center, the world’s first end-to-end prototyping facility comes with advanced computer-assisted design and fabrication tools to help accelerate new advanced fabric ideas from the concept to functional products.

“We’re bringing these folks in who all have ideas, passions, some framework for a company and technology they want to apply to the real world. We’re exposing them to a wealth of technology,” Fink says. “When you take passionate entrepreneurs and connect them with advanced technologies, wonderful things happen.”

Apart from the prototyping facilities, Kahn says, AFFOA will provide the entrepreneurs with a long list of industry connections to leverage for potential customers, partners, or investors — something that could otherwise be challenging in the incipient functional fabrics industry.

“The expectation is entrepreneurs will tap that membership,” Kahn says. “This [program] is going to grease the skids for entrepreneurs, allowing access to something they usually wouldn’t have.”

All AFEP entrepreneurs aren’t expected to launch startups, however, Kahn says. Participants could walk away with patents or licensing agreements, a solid business plan, or simply a detailed marketable idea. Just as long as they’re on the commercialization track, she says: “At the end of the day, we want the entrepreneurs to have a clear path and plan to get their product into practical use.”