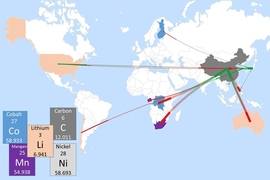 ↓ Download Image
Caption: A new analysis indicates that, without proper planning, there could be short-term bottlenecks in the supplies of some metals, particularly lithium and cobalt, that could cause temporary slowdowns in lithium-ion battery production. This map shows today’s trade flows of key ingredients for battery production, with exports from each country shown in red and imports in green.

Caption:
A new analysis indicates that, without proper planning, there could be short-term bottlenecks in the supplies of some metals, particularly lithium and cobalt, that could cause temporary slowdowns in lithium-ion battery production. This map shows today’s trade flows of key ingredients for battery production, with exports from each country shown in red and imports in green.

The dramatic rise in production of electric vehicles, coupled with expected growth in the use of grid-connected battery systems for storing electricity from renewable sources, raises a crucial question: Are there enough raw materials to enable significantly increased production of lithium-ion batteries, which are the dominant type of rechargeable batteries on the market?

A new analysis by researchers at MIT and elsewhere indicates that for the near future, there will be no absolute limitations on battery manufacturing due to shortages of the critical metals they require. But, without proper planning, there could be short-term bottlenecks in the supplies of some metals, particularly lithium and cobalt, that could cause temporary slowdowns in production.

The analysis, by professor Elsa Olivetti and doctoral student Xinkai Fu in MIT’s Department of Materials Science and Engineering, Gerbrand Ceder at the University of California at Berkeley, and Gabrielle Gaustad at the Rochester Institute of Technology, appears today in the journal Joule.

Olivetti, who is the Atlantic Richfield Assistant Professor of Energy Studies, says the new journal’s editors asked her to look at possible resource limitations as battery production escalates globally. To do that, Olivetti and her co-authors concentrated on five of the most essential ingredients needed to produce today’s lithium-ion batteries: lithium, cobalt, manganese, nickel, and carbon in the form of graphite. Other key ingredients, such as copper, aluminum, and some polymers used as membranes, are considered abundant enough that they are not likely to be a limiting factor.

Among those five materials, it was quickly clear that nickel and manganese are used much more widely in other industries; battery production, even if significantly increased, is “not a significant part of the pie,” Olivetti says, so nickel and manganese supplies are not likely to be impacted. Ultimately, the most significant materials whose supply chains could become limited are lithium and cobalt, she says.

For those two elements, the team looked at the diversity of the supply options in terms of geographical distribution, production facilities, and other variables. For lithium, there are two main pathways to production: mining and processing of brines. Of those, production from brine can be ramped up to meet demand much more rapidly, within as little as six or eight months, compared to bringing a new underground mine into production, Olivetti says. Although there might still be disruptions in the supply of lithium, she says, these are unlikely to seriously disrupt battery production.

Cobalt is a bit more complex. Its major source is the Democratic Republic of the Congo, which has a history of violent conflict and corruption. “That’s been a challenge,” Olivetti says. Cobalt is typically produced as a byproduct of other mining activity. “Often a mine’s revenue comes from nickel, and cobalt is a secondary product,” she says.

But the main potential cause of delays in obtaining new supplies of the mineral comes from not its inherent geographic distribution, but the actual extraction infrastructure. “The delay is in the ability to open new mines,” she says. “With any of these things, the material is out there, but the question is at what price.” To guard against possible disruptions in the cobalt supply, she says, researchers “are trying to move to cathode materials [for lithium-ion batteries] that are less cobalt-dependent.”

The study looked out over the next 15 years, and within that time frame, Olivetti says, there are potentially some bottlenecks in the supply chain, but no serious obstacles to meeting the rising demand. Still, she says, “it’s important for stakeholders to be aware of the bottlenecks,” as unanticipated supply disruptions could put some companies out of business. Companies need to think about alternative sources, and “know where and when to panic.”

And understanding which materials are most subject to disruption could help guide research directions, in deciding “where do we put our development efforts. It does make sense to think of cathodes that use less cobalt,” Olivetti says.

Overall, she says, “in most cases there are reasonable supplies” of the critical materials, “but there are potential challenges that should be approached with eyes wide open. What we tried to present is a framework by which to think about these challenges in a bit more quantitative way than you usually see.”