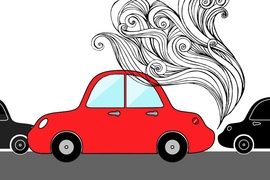 ↓ Download Image
Caption: Graviky Labs has developed technology that attaches to exhaust systems of diesel generator chimneys to capture particulate matter (PM). Scientists at Graviky then treat the soot to turn it into ink, called Air-Ink, for artists around the world. 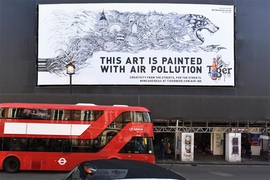 ↓ Download Image
Caption: Tiger Beer and Graviky Labs teamed up to provide a group of artists with Air-Ink to create murals. One result was this billboard erected on Shaftesbury Avenue in London.
Credits: Courtesy of Graviky Labs

Caption:
Graviky Labs has developed technology that attaches to exhaust systems of diesel generator chimneys to capture particulate matter (PM). Scientists at Graviky then treat the soot to turn it into ink, called Air-Ink, for artists around the world.

Caption:
Tiger Beer and Graviky Labs teamed up to provide a group of artists with Air-Ink to create murals. One result was this billboard erected on Shaftesbury Avenue in London.

On a break from his studies in the MIT Media Lab, Anirudh Sharma SM ’14 traveled home to Mumbai, India. While there, he noticed that throughout the day his T-shirts were gradually accumulating something that resembled dirt.

“I realized this was air pollution, or sooty particulate matter, made of black particles released from exhaust of vehicles,” Sharma says. “This is a major health issue.”

Soot comprises tiny black particles, about 2.5 micrometers or smaller, made of carbon produced by incomplete combustion of fossil fuels. Breathing in the particles can lead to lung damage, cancers, and other conditions.

A 2015 conference paper presented at a meeting for the American Association for the Advancement of Science estimated that in 2013 more than 5.5 million people worldwide died prematurely from air pollution. In India alone, air pollution has been linked to anywhere from 1.1 million to 1.4 million premature deaths over the past few years, according to various studies.

Back at MIT, Sharma set out to help solve this dire air-pollution issue. After years of research and development, Sharma’s startup Graviky Labs has developed technology that attaches to exhaust systems of diesel generator chimneys to capture particulate matter. Scientists at Graviky then treat the soot to turn it into ink, called Air-Ink, for artists around the world.

So far, the startup, which is commercially piloting its KAALINK devices for use on diesel generators across India, has captured 1.6 billion micrograms of particulate matter, which equates to cleaning roughly 1.6 trillion liters of outdoor air. More than 200 gallons of Air-Ink have been harvested for a growing community of more than 1,000 artists, from Bangalore to Boston, Hong Kong, and London.

KAALINK is a cylindrical device that retrofits to the exhaust systems of vehicles or diesel generators and relies on static electricity, a phenomenon in which energized materials attract particles. Inside the device are cartridges filled with a high-energy plasma. An applied voltage triggers the plasma to attract soot particles flying by, ridding the air of roughly 85 to 95 percent of particles without affecting the exhaust system.

A KAALINK device can stay on an exhaust system for about 15 to 20 days. Users then empty the disposable cartridges into special Graviky Labs collection units, where they are sent straight to the startup’s lab for treatment. This system — co-invented by Nitesh Kadyan and Nikhil Kaushik — removes heavy metals and toxins to create usable Air-Ink.

Similar soot-capturing processes exist, Sharma says, but they capture the soot by dissolving it in liquids, which makes the treatment process complex and expensive. Graviky, on the other hand, captures the particulate matter in its basic dry form. “Other processes convert air pollution into water pollution, and essentially generate more waste,” Sharma says. “We minimize the process and create a recycling stream from particulate matter waste that would have otherwise gone into our lungs.”

Currently, KAALINK isn’t a consumer product. Graviky primarily sells the filter to companies and organizations in India for capturing soot from the diesel generators that help power hospitals, malls, schools, apartment complexes, and other buildings. Companies have also sought to retrofit diesel generators with KAALINK to make them carbon neutral. Graviky later buys back the captured particulate matter from the owners of these engines to incentivize pollution capture.

Posted all over Graviky Lab’s Facebook page today are photos of art made from the Air-Ink and paint, including portraits, street murals, body art, sketches, and clothing prints. In London, an Air-Ink mural was featured for several weeks in Piccadilly Circus, and the city’s Museum of Writing has a permanent exhibit on Air-Ink.

One Boston artist using Air-Ink is Sneha Shrestha, a native of Nepal who paints mantras in her native language, meshing Sanskrit and graffiti styles. She has been using Air-Ink for “handstyles” (a unique graffiti artist signature) and has received requests from galleries worldwide to create art using this ink.

Using Air-Ink, a product made and shipped out from Bangalore, also holds personal significance for the artist from Kathmandu. “I am taking waste collected from a place close to my hometown and I am creating something beautiful out of it,” says Shrestha, who is also founder and senior advisor of the Children’s Art Museum of Nepal. "My work is inspired by the culture and native language of my hometown and Air-Ink added another layer of connection to where I am from.”

Air-Ink, she adds, could be a valuable tool in raising awareness about air pollution globally. “Air-Ink makes the concept of pollution more tangible for a wider audience,” she says. “When you can see what polluted air looks like in a tangible form, it definitely raises curiosity and start conversations about pollution.”

A successfully funded Kickstarter campaign over the summer sold out on various Air-Ink markers and decorated T-shirts, postcards, motorcycle helmets, and shoes. According to Graviky, each ounce of Air-Ink — about enough to make one marker — offsets 45 minutes of air pollution generated by a vehicle.

But the aim wasn’t always to create art. “I started with the general question, ‘What are the things you can do with carbon that’s collected?’” Sharma says of his early days designing the technology in the Media Lab’s Fluid Interfaces Group with Pattie Maes, a professor of media technology and academic head of the Program in Media Arts and Sciences.

The initial prototype for the device, developed in 2012, was actually a printer that sucked in carbon and filled an ink cartridge, and would be used strictly for paper printing. But the printer wasn’t scalable, so Sharma refined the bulky device into an exhaust retrofit that could go “beyond the lab and have real-world impact,” he says.

In 2013, Sharma launched Graviky headquarters, ready to release the product in heavily polluted India. “It’s pretty dire here,” Sharma says. “Primary schools have been shut down because of air pollution. It’s a catastrophe. I wanted to create technologies that are new and can have a large social impact, and that brought me back here.”

At first, there was still no specific application for the ink. Then, about a year ago, the startup decided to find new ways to further spread its mission. It chose to do so through art. “Art helps us raise awareness about where the ink and paint comes from. Artists are spreading the word that this is a very special ink that makes a difference,” Sharma says.

In March, Tiger Beer reached out to Graviky to create a large campaign against air pollution. For the project, Graviky gave 150 liters of Air-Ink — or, roughly 2,500 hours of air pollution, according to Graviky — to artists in Hong Kong, known for its high air pollution, to create murals. This effort won the startup several awards, including a Gold at Cannes Lions for outdoor impact innovation.

Now, as the community of artists using Air-Ink grows, Sharma hopes Graviky’s message gets heard worldwide. “Air pollution knows no borders,” he says. “It’s in India, Boston, and places all over the world. Our ink sends a message that pollution is one of the resources in our world that’s the hardest to capture and use. But it can be done.”

MIT startup Graviky Labs is partnering with the fashion label Pangaia to create clothing featuring graphics made from pollution sucked out of the air, reports Elizabeth Segran for Fast Company. “It’s an entirely new approach to carbon capture,” says alumnus and Graviky Labs co-founder Anirudh Sharma. “We’re literally extracting carbon particles from the atmosphere and selling it to the consumer.”