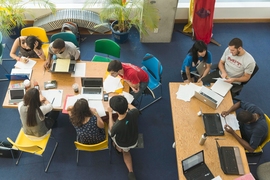 Caption:
“If you work near someone, you’re more likely to have substantive conversations more frequently,” says doctoral student Matthew Claudel.

Want to boost collaboration among researchers? Even in an age of easy virtual communication, physical proximity increases collaborative activity among academic scholars, according to a new study examining a decade’s worth of MIT-based papers and patents.

In particular, the study finds that cross-disciplinary and interdepartmental collaboration is fueled by basic face-to-face interaction within shared spaces.

“If you work near someone, you’re more likely to have substantive conversations more frequently,” says Matthew Claudel, a doctoral student in MIT’s Department of Urban Studies and Planning (DUSP) and the MIT Lab for Innovation Science and Policy, and the lead author of a new paper detailing the findings.

The study examines 40,358 published papers and 2,350 patents that stemmed from MIT research and appeared between the years 2004 and 2014. The study uses network analysis: The researchers mapped out a network of MIT collaborators and found that it revealed the importance of spatial relations on campus, above and beyond departmental and institutional structures.

As such, the findings help confirm the importance of proximity on a campus where, through the years, many buildings have indeed been designed to encourage cross-disciplinary research.

“Intuitively, there is a connection between space and collaboration,” Claudel observes. “That is, you have better chance of meeting someone, connecting, and working together if you are close by spatially.” Even so, he says, “It was an exciting result to find that across papers and patents, and specifically for transdisciplinary collaborations.” He adds, “In many ways, this data really confirms the Allen Curve.”

That refers to pioneering work by Thomas Allen, a professor emeritus at the MIT Sloan School of Management and author of many studies about workspace. Allen found that collaboration and interaction diminish as a function of distance (in a way that produces a curve when plotted on a graph); even basic conversations are much less likely to occur among workers situated more than 10 meters apart. Many of Allen’s ideas are in his 1977 book, “Managing the Flow of Technology.”

In this case, the researchers have extended Allen’s insights by identifying a similar curve; they plotted distance and collaboration on a campus-wide basis, not just within single buildings, and focused on interdisciplinary research.

The paper, “An exploration of collaborative scientific production at MIT through spatial organization and institutional affiliation,” appears in the journal PLOS ONE. The co-authors are Claudel; Emanuele Massaro, a postdoc in MIT’s Senseable City Lab (part of DUSP); Paolo Santi, a visiting scientist at the Senseable City Lab; Fiona Murray, associate dean for innovation, co-director of the MIT Innovation Initiative, and the William Porter Professor of Entrepreneurship at MIT Sloan; and Carlo Ratti, a professor of the practice in DUSP and director of MIT’s Senseable City Lab.

Claudel initiated the research on the subject as part of his master’s thesis, which was itself cross-disciplinary, supported by both the Senseable City Lab and MIT’s Lab for Innovation Science and Policy. Ratti and Murray also served as supervisors for Claudel’s thesis. A basic impetus for studying architecture and collaboration, he explains, was his desire “to understand how that plays out on the MIT campus and [to see] if it holds up in the digital era,” when collaborators can communicate quickly by virtual means, whether by instant message, text, Skype, or email.

The study exploits the fact that many MIT departments and programs are located in multiple buildings; a corollary is that many MIT buildings house multiple academic groups. (There are, for instance, 16 departments and programs in MIT’s Building 3.) This scattering of some areas of inquiry means distance between workspaces might affect how often researchers in similar fields collaborate with each other.

The study examines the published output of 33 departments and programs at MIT, and shows that the effect of proximity on collaboration is slightly different for papers than for patents.

For patents, that curve is slightly less steep. Researchers in the same workspace are more than twice as likely to collaborate compared to those who are 400 meters apart. But the frequency of collaboration does not diminish as quickly, and only drops in half again when researchers are 1,600 meters apart.

As Claudel interprets the findings, this shows that proximity, even at these middle distances, still has an incremental effect on work that ends up earning patents.

As the paper notes, however, for both papers and patents there is “a persistent relationship between physical proximity and intensity of collaboration.”

Among other data points, the study found that MIT’s Building 76, the Koch Institute for Integrative Cancer Research at MIT, has the highest rate of intra-MIT co-authorship — that is, the highest percentage of total publications that are written with other Institute faculty (roughly 32 percent).

When it comes to patents, among buildings whose faculty produced over 100 patents in this time period, Building 32 (the Stata Center) and Building 76 have the highest rates of intra-MIT collaboration (31 percent and 27 percent, respectively).

To a significant extent, that is by design, since both structures were intended to promote interdisciplinary research. The Stata Center houses faculty in eight departments and programs, ranging from computer science to linguistics; the Koch Institute was intended to place research scientists and bioengineering experts in close proximity as a way of encouraging innovations in cancer-fighting technology.

MIT has a tradition of architecture built with those kinds of aims in mind, starting with its main building and its famous “Infinite Corridor,” which links a diverse set of researchers. MIT’s former Building 20, demolished in 1997, was also famous for providing malleable workspaces that could be reshaped by a diverse set of faculty. (The Stata Center, opened in 2004, was designed with open-space features in an effort to replicate Building 20’s effects.)

Meanwhile the MIT.nano building, still under construction, is also intended to bring diverse groups of researchers together.

“It’s an exciting space, and I think it has been designed with many of these principles in mind,” Claudel says.

The researchers note that the current study could be extended in many ways — on other campuses, for instance, or over time, by studying the changes in collaborative activity as faculty are relocated to a new building or linked by cross-departmental initiatives. In any case, Massaro points out, “adding an architectural dimension to the field of scientometrics,” as the current paper does, could be a valuable “step toward empirical space-planning policy that supports collaboration within institutions.”

In sum, studying precisely how architecture can enhance innovation is still a work in progress — but a growing body of evidence suggests it truly matters.

“You can never predetermine what research will be novel and powerful and exciting,” Claudel says. “But you can create the conditions for collaborative innovation to happen.”

A study by MIT researchers shows that physical proximity can increase collaboration, reports Colleen Flaherty for Inside Higher Ed. The researchers examined thousands of papers and patents stemming from MIT research and found that “paper collaborators in the same workspace were three times more likely to work together than those located 400 meters apart.”