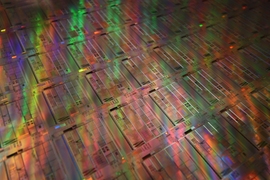 ↓ Download Image
Caption: "We now have the ability to have a second-order nonlinearity in silicon, and this is the first real demonstration of that, says Michael Watts, an associate professor of electrical engineering and computer science at MIT.
Credits: Courtesy of the researchers

Caption:
"We now have the ability to have a second-order nonlinearity in silicon, and this is the first real demonstration of that, says Michael Watts, an associate professor of electrical engineering and computer science at MIT.
Credits:
Courtesy of the researchers

The Semiconductor Industry Association has estimated that at current rates of increase, computers’ energy requirements will exceed the world’s total power output by 2040.

Using light rather than electricity to move data would dramatically reduce computer chips’ energy consumption, and the past 20 years have seen remarkable progress in the development of silicon photonics, or optical devices that are made from silicon so they can easily be integrated with electronics on silicon chips.

In the latest issue of Nature Photonics, MIT researchers present a practical way to introduce second-order nonlinearities into silicon photonics. They also report prototypes of two different silicon devices that exploit those nonlinearities: a modulator, which encodes data onto an optical beam, and a frequency doubler, a component vital to the development of lasers that can be precisely tuned to a range of different frequencies.

In optics, a linear system is one whose outputs are always at the same frequencies as its inputs. So a frequency doubler, for instance, is an inherently nonlinear device.

“We now have the ability to have a second-order nonlinearity in silicon, and this is the first real demonstration of that,” says Michael Watts, an associate professor of electrical engineering and computer science at MIT and senior author on the new paper.

“Now you can build a phase modulator that is not dependent on the free-carrier effect in silicon. The benefit there is that the free-carrier effect in silicon always has a phase and amplitude coupling. So whenever you change the carrier concentration, you’re changing both the phase and the amplitude of the wave that’s passing through it. With second-order nonlinearity, you break that coupling, so you can have a pure phase modulator. That’s important for a lot of applications. Certainly in the communications realm that’s important.”

The first author on the new paper is Erman Timurdogan, who completed his PhD at MIT last year and is now at the silicon-photonics company Analog Photonics. He and Watts are joined by Matthew Byrd, an MIT graduate student in electrical engineering and computer science, and Christopher Poulton, who did his master’s in Watts’s group and is also now at Analog Photonics.

If an electromagnetic wave can be thought of as a pattern of regular up-and-down squiggles, a digital modulator perturbs that pattern in fixed ways to represent strings of zeroes and ones. In a silicon modulator, the path that the light wave takes is defined by a waveguide, which is rather like a rail that runs along the top of the modulator.

A conventional silicon modulator is half p-type and half n-type silicon; even the waveguide is split right down the middle. On either side of the waveguide are electrodes, and changing the voltage across the modulator alternately concentrates and dissipates free carriers in the waveguide, to modulate an optical signal passing through.

The MIT researchers’ device is similar, except that the center of the modulator — including the waveguide that runs along its top — is undoped. When a voltage is applied, the free carriers don’t collect in the center of the device; instead, they build up at the boundary between the n-type silicon and the undoped silicon. A corresponding positive charge builds up at the boundary with the p-type silicon, producing an electric field, which is what modulates the optical signal.

Because the free carriers at the center of a conventional silicon modulator can absorb light particles — or photons — traveling through the waveguide, they diminish the strength of the optical signal; modulators that exploit second-order nonlinearities don’t face that problem.

In principle, they can also modulate a signal more rapidly than existing silicon modulators do. That’s because it takes more time to move free carriers into and out of the waveguide than it does to concentrate and release them at the boundaries with the undoped silicon. The current paper simply reports the phenomenon of nonlinear modulation, but Timurdogan says that the team has since tested prototypes of a modulator whose speeds are competitive with those of the nonlinear modulators found in telecom networks.

The frequency doubler that the researchers demonstrated has a similar design, except that the regions of p- and n-doped silicon that flank the central region of undoped silicon are arranged in regularly spaced bands, perpendicular to the waveguide. The distances between the bands are calibrated to a specific wavelength of light, and when a voltage is applied across them, they double the frequency of the optical signal passing through the waveguide, combining pairs of photons into single photons with twice the energy.

“Silicon has had a huge renaissance within the optical communication space for a variety of applications,” says Jason Orcutt, a researcher in the Physical Sciences Department at IBM's Thomas J. Watson Research Center. “However, there are still remaining application spaces — from microwave photonics to quantum optics — where the lack of second-order nonlinear effects in silicon has prevented progress. This is an important step towards addressing a wider range of applications within the mature silicon-photonics platforms around the world.”

“To date, efforts to achieve second-order nonlinear effects in silicon have focused on hard material-science problems,” Orcutt adds. “The [MIT] team has been extremely clever by reminding the physics community what we shouldn't have forgotten. Applying a simple electric field creates the same basic crystal polarization vector that other researchers have worked hard to create by far more complicated means.”