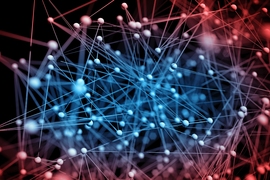 ↓ Download Image
Caption: “There’s a close correspondence between what you need for communication in rapidly changing networks and information processing in the brain,” professor Nancy Lynch says. “We’re trying to find problems that can benefit from this distributed-computing perspective, focusing on algorithms for which we can prove mathematical properties.”

Caption:
“There’s a close correspondence between the behavior of networks of computers or other devices like mobile phones and that of biological systems,” says MIT professor Nancy Lynch. “We’re trying to find problems that can benefit from this distributed-computing perspective, focusing on algorithms for which we can prove mathematical properties.”

Researchers at MIT’s Computer Science and Artificial Intelligence Laboratory have developed a new computational model of a neural circuit in the brain, which could shed light on the biological role of inhibitory neurons — neurons that keep other neurons from firing.

The model describes a neural circuit consisting of an array of input neurons and an equivalent number of output neurons. The circuit performs what neuroscientists call a “winner-take-all” operation, in which signals from multiple input neurons induce a signal in just one output neuron.

Using the tools of theoretical computer science, the researchers prove that, within the context of their model, a certain configuration of inhibitory neurons provides the most efficient means of enacting a winner-take-all operation. Because the model makes empirical predictions about the behavior of inhibitory neurons in the brain, it offers a good example of the way in which computational analysis could aid neuroscience.

The researchers will present their results this week at the conference on Innovations in Theoretical Computer Science. Nancy Lynch, the NEC Professor of Software Science and Engineering at MIT, is the senior author on the paper. She’s joined by Merav Parter, a postdoc in her group, and Cameron Musco, an MIT graduate student in electrical engineering and computer science.

For years, Lynch’s group has studied communication and resource allocation in ad hoc networks — networks whose members are continually leaving and rejoining. But recently, the team has begun using the tools of network analysis to investigate biological phenomena.

“There’s a close correspondence between the behavior of networks of computers or other devices like mobile phones and that of biological systems,” Lynch says. “We’re trying to find problems that can benefit from this distributed-computing perspective, focusing on algorithms for which we can prove mathematical properties.”

In recent years, artificial neural networks — computer models roughly based on the structure of the brain — have been responsible for some of the most rapid improvement in artificial-intelligence systems, from speech transcription to face recognition software.

An artificial neural network consists of “nodes” that, like individual neurons, have limited information-processing power but are densely interconnected. Data are fed into the first layer of nodes. If the data received by a given node meet some threshold criterion — for instance, if it exceeds a particular value — the node “fires,” or sends signals along all of its outgoing connections.

Each of those outgoing connections, however, has an associated “weight,” which can augment or diminish a signal. Each node in the next layer of the network receives weighted signals from multiple nodes in the first layer; it adds them together, and again, if their sum exceeds some threshold, it fires. Its outgoing signals pass to the next layer, and so on.

In artificial-intelligence applications, a neural network is “trained” on sample data, constantly adjusting its weights and firing thresholds until the output of its final layer consistently represents the solution to some computational problem.

Lynch, Parter, and Musco made several modifications to this design to make it more biologically plausible. The first was the addition of inhibitory “neurons.” In a standard artificial neural network, the values of the weights on the connections are usually positive or capable of being either positive or negative. But in the brain, some neurons appear to play a purely inhibitory role, preventing other neurons from firing. The MIT researchers modeled those neurons as nodes whose connections have only negative weights.

Many artificial-intelligence applications also use “feed-forward” networks, in which signals pass through the network in only one direction, from the first layer, which receives input data, to the last layer, which provides the result of a computation. But connections in the brain are much more complex. Lynch, Parter, and Musco’s circuit thus includes feedback: Signals from the output neurons pass to the inhibitory neurons, whose output in turn passes back to the output neurons. The signaling of the output neurons also feeds back on itself, which proves essential to enacting the winner-take-all strategy.

Finally, the MIT researchers’ network is probabilistic. In a typical artificial neural net, if a node’s input values exceed some threshold, the node fires. But in the brain, increasing the strength of the signal traveling over an input neuron only increases the chances that an output neuron will fire. The same is true of the nodes in the researchers’ model. Again, this modification is crucial to enacting the winner-take-all strategy.

In the researchers’ model, the number of input and output neurons is fixed, and the execution of the winner-take-all computation is purely the work of a bank of auxiliary neurons. “We are trying to see the trade-off between the computational time to solve a given problem and the number of auxiliary neurons,” Parter explains. “We consider neurons to be a resource; we don’t want too spend much of it.”

Without randomness, however, the circuit won’t converge to a single output neuron: Any setting of the inhibitory neurons’ weights will affect all the output neurons equally. “You need randomness to break the symmetry,” Parter explains.

But perhaps more intriguingly, the researchers showed that including excitatory neurons — neurons that stimulate, rather than inhibit, other neurons’ firing — as well as inhibitory neurons among the auxiliary neurons cannot improve the efficiency of the circuit. Similarly, any arrangement of inhibitory neurons that doesn’t observe the distinction between convergence and stability neurons will be less efficient than one that does.

Assuming, then, that evolution tends to find efficient solutions to engineering problems, the model suggests both an answer to the question of why inhibitory neurons are found in the brain and a tantalizing question for empirical research: Do real inhibitory neurons exhibit the same division between convergence neurons and stability neurons?

“This computation of winner-take-all is quite a broad and useful motif that we see throughout the brain,” says Saket Navlakha, an assistant professor in the Integrative Biology Laboratory at the Salk Institute for Biological Studies. “In many sensory systems — for example, the olfactory system — it’s used to generate sparse codes.”

“There are many classes of inhibitory neurons that we’ve discovered, and a natural next step would be to see if some of these classes map on to the ones predicted in this study,” he adds.

“There’s a lot of work in neuroscience on computational models that take into account much more detail about not just inhibitory neurons but what proteins drive these neurons and so on,” says Ziv Bar-Joseph, a professor of computer science at Carnegie Mellon University. “Nancy is taking a global view of the network rather than looking at the specific details. In return she gets the ability to look at some larger-picture aspects. How many inhibitory neurons do you really need? Why do we have so few compared to the excitatory neurons? The unique aspect here is that this global-scale modeling gives you a much higher-level type of prediction.”