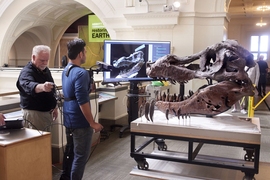 ↓ Download Image
Caption: Researchers demonstrate their scanning technique, with a user holding a monopod-mounted Kinect at close range from a T. Rex skull.

Caption:
Researchers demonstrate their scanning technique, with a user holding a monopod-mounted Kinect at close range from a T. Rex skull.

Caption:
A photograph of a T. Rex skull, with different 3-D scans of the skull.

Last year, a team of forensic dentists got authorization to perform a 3-D scan of the prized Tyrannosaurus rex skull at the Field Museum of Natural History in Chicago, in an effort to try to explain some strange holes in the jawbone.

Upon discovering that their high-resolution dental scanners couldn’t handle a jaw as big as a tyrannosaur’s, they contacted the Camera Culture group at MIT’s Media Lab, which had recently made headlines with a prototype system for producing high-resolution 3-D scans.

The prototype wasn’t ready for a job that big, however, so Camera Culture researchers used $150 in hardware and some free software to rig up a system that has since produced a 3-D scan of the entire five-foot-long T. rex skull, which a team of researchers — including dentists, anthropologists, veterinarians, and paleontologists — is using to analyze the holes.

The Media Lab researchers report their results in the latest issue of the journal PLOS One.

“A lot of people will be able to start using this,” says Anshuman Das, a research scientist at the Camera Culture group and first author on the paper. “That’s the message I want to send out to people who would generally be cut off from using technology — for example, paleontologists or museums that are on a very tight budget. There are so many other fields that could benefit from this.”

Das is joined on the paper by Ramesh Raskar, a professor of media arts and science at MIT, who directs the Camera Culture group, and by Denise Murmann and Kenneth Cohrn, the forensic dentists who launched the project.

The system uses a Microsoft Kinect, a depth-sensing camera designed for video gaming. The Kinect’s built-in software produces a “point cloud,” a 3-D map of points in a visual scene from which short bursts of infrared light have been reflected back to a sensor. Free software called MeshLab analyzes the point cloud and infers the shape of the surfaces that produced it.

A high-end commercial 3-D scanner costs tens of thousands of dollars and has a depth resolution of about 50 to 100 micrometers. The Kinect’s resolution is only about 500 micrometers, but it costs roughly $100. And 500 micrometers appears to be good enough to shed some light on the question of the mysterious holes in the jaw of the T. rex skull.

Discovered in 1990, the Field Museum’s T. rex skeleton, known as Sue, is the largest and most complete yet found. For years, it was widely assumed that the holes in the jaw were teeth marks, probably from an attack by another tyrannosaur. Ridges of growth around the edges of the holes show that Sue survived whatever caused them.

But the spacing between the holes is irregular, which is inconsistent with bite patterns. In 2009, a group of paleontologists from the University of Wisconsin suggested that the holes could have been caused by a protozoal infection, contracted from eating infected prey, that penetrated Sue’s jaw from the inside out.

The 3-D scan produced by the MIT researchers and their collaborators sheds doubt on both these hypotheses. It shows that the angles at which the holes bore through the jaw are inconsistent enough that they almost certainly weren’t caused by a single bite. But it also shows that the holes taper from the outside in, which undermines the hypothesis of a mouth infection.

One of the great advantages of 3-D scans is that they can be shared remotely. The Field Museum limits the time that researchers can spend with Sue’s skull, so the Wisconsin paleontologists’ analysis was largely based on photographs. But photographs don’t permit the comparison of the holes’ diameters at the inner and outer surfaces.

And if researchers working with a scan needed to examine a particular feature in close detail, they could use a 3-D printer to build a replica. To demonstrate this capacity, Das and his colleagues used their scan of Sue’s skull to produce a few models of it, at one-eighth the actual size.

Das envisions that Kinect scans could prove as useful in other fields, such as archaeology and anthropology, as they could in paleontology. An archaeologist who unearths a large, fragile, artifact in a remote corner of the world could scan it and immediately share the scan with colleagues around the world.

“It’s that critical size,” Das says. “If it’s something really small, you can use a 3-D scanner. But if you have something stationary that’s difficult to move, you just put on the [Kinect] rig and walk around.”

Indeed, when Das scanned Sue’s skull, he mounted the Kinect in a modified camera harness and wore it on his chest. The space in which he performed the scan was irregularly shaped and presented various immovable obstacles, so it took him some time to find a route that would permit him to maintain a fixed distance from the skull as he walked around. But once he identified the route, the scan itself took about two minutes.

In ongoing work, Das, Murmann, Cohrn, Raskar, and a team of collaborators including the Wisconsin paleontologists, are looking at fragmentation patterns at the edges of the holes and at the holes’ depths and diameters, to see if they can infer anything about the shape, hardness, and velocity of whatever object might have caused them.

“Three-dimensional scanning has really revolutionized paleontology,” says Peter Mackovicky, associate chair of paleontology at the Field Museum. “We’re able to ask and answer a lot of quantitative questions. But in general we are a pretty underfunded field, and for a lot of folks, off-the-shelf scanning systems are still out of the usual reach of a research budget. Having something that is very cheap, versatile, and relatively fast is certainly useful. And one nice thing about [the new] system is that your results are immediate. You can see in real-time whether you’re capturing the data you need, which is a great benefit.”

“For me, one of the challenges is working in other countries,” Mackovicky adds. “I worked with local paleontologists in Argentina, and we have some material that’s been dug up, and we have a nice new species of very large meat-eating dinosaur. I tried some years ago to do some scanning with an entry-level tabletop laser-scanner system, and it was fairly good for some parts but extremely time consuming — literally hours for a single bone. [This] system is much, much faster. For a project like that, for me to have copies of these bones — which are far too large to ship here for study and also would require a very extensive permit application process to leave their country of origin — this is a really useful tool.”