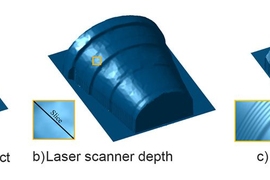 ↓ Download Image
Caption: By combining the information from the Kinect depth frame in (a) with polarized photographs, MIT researchers reconstructed the 3-D surface shown in (c). Polarization cues can allow coarse depth sensors like Kinect to achieve laser scan quality (b).

Caption:
By combining the information from the Kinect depth frame in (a) with polarized photographs, MIT researchers reconstructed the 3-D surface shown in (c). Polarization cues can allow coarse depth sensors like Kinect to achieve laser scan quality (b).
Credits:
Courtesy of the researchers

MIT researchers have shown that by exploiting the polarization of light — the physical phenomenon behind polarized sunglasses and most 3-D movie systems — they can increase the depth resolution of conventional 3-D imaging devices as much as 1,000 times.

The technique could lead to high-quality 3-D cameras built into cellphones, and perhaps to the ability to snap a photo of an object and then use a 3-D printer to produce a replica.

Further out, the work could also abet the development of driverless cars.

“Today, they can miniaturize 3-D cameras to fit on cellphones,” says Achuta Kadambi, a PhD student in the MIT Media Lab and one of the system’s developers. “But they make compromises to the 3-D sensing, leading to very coarse recovery of geometry. That’s a natural application for polarization, because you can still use a low-quality sensor, and adding a polarizing filter gives you something that’s better than many machine-shop laser scanners.”

The researchers describe the new system, which they call Polarized 3D, in a paper they’re presenting at the International Conference on Computer Vision in December. Kadambi is the first author, and he’s joined by his thesis advisor, Ramesh Raskar, associate professor of media arts and sciences in the MIT Media Lab; Boxin Shi, who was a postdoc in Raskar’s group and is now a research fellow at the Rapid-Rich Object Search Lab; and Vage Taamazyan, a master’s student at the Skolkovo Institute of Science and Technology in Russia, which MIT helped found in 2011.

When polarized light gets the bounce

If an electromagnetic wave can be thought of as an undulating squiggle, polarization refers to the squiggle’s orientation. It could be undulating up and down, or side to side, or somewhere in-between.

Polarization also affects the way in which light bounces off of physical objects. If light strikes an object squarely, much of it will be absorbed, but whatever reflects back will have the same mix of polarizations that the incoming light did. At wider angles of reflection, however, light within a certain range of polarizations is more likely to be reflected.

This is why polarized sunglasses are good at cutting out glare: Light from the sun bouncing off asphalt or water at a low angle features an unusually heavy concentration of light with a particular polarization. So the polarization of reflected light carries information about the geometry of the objects it has struck.

This means that for any surface in a visual scene, measurements based on polarized light offer two equally plausible hypotheses about its orientation. Canvassing all the possible combinations of either of the two orientations of every surface, in order to identify the one that makes the most sense geometrically, is a prohibitively time-consuming computation.

To resolve this ambiguity, the Media Lab researchers use coarse depth estimates provided by some other method, such as the time a light signal takes to reflect off of an object and return to its source. Even with this added information, calculating surface orientation from measurements of polarized light is complicated, but it can be done in real-time by a graphics processing unit, the type of special-purpose graphics chip found in most video game consoles.

The researchers’ experimental setup consisted of a Microsoft Kinect — which gauges depth using reflection time — with an ordinary polarizing photographic lens placed in front of its camera. In each experiment, the researchers took three photos of an object, rotating the polarizing filter each time, and their algorithms compared the light intensities of the resulting images.

On its own, at a distance of several meters, the Kinect can resolve physical features as small as a centimeter or so across. But with the addition of the polarization information, the researchers’ system could resolve features in the range of tens of micrometers, or one-thousandth the size.

For comparison, the researchers also imaged several of their test objects with a high-precision laser scanner, which requires that the object be inserted into the scanner bed. Polarized 3D still offered the higher resolution.

A mechanically rotated polarization filter would probably be impractical in a cellphone camera, but grids of tiny polarization filters that can overlay individual pixels in a light sensor are commercially available. Capturing three pixels’ worth of light for each image pixel would reduce a cellphone camera’s resolution, but no more than the color filters that existing cameras already use.

The new paper also offers the tantalizing prospect that polarization systems could aid the development of self-driving cars. Today’s experimental self-driving cars are, in fact, highly reliable under normal illumination conditions, but their vision algorithms go haywire in rain, snow, or fog. That’s because water particles in the air scatter light in unpredictable ways, making it much harder to interpret.

The MIT researchers show that in some very simple test cases — which have nonetheless bedeviled conventional computer vision algorithms — their system can exploit information contained in interfering waves of light to handle scattering. “Mitigating scattering in controlled scenes is a small step,” Kadambi says. “But that’s something that I think will be a cool open problem.”

“The work fuses two 3-D sensing principles, each having pros and cons,” says Yoav Schechner, an associate professor of electrical engineering at Technion — Israel Institute of Technology in Haifa, Israel. “One principle provides the range for each scene pixel: This is the state of the art of most 3-D imaging systems. The second principle does not provide range. On the other hand, it derives the object slope, locally. In other words, per scene pixel, it tells how flat or oblique the object is.”

“The work uses each principle to solve problems associated with the other principle,” Schechner explains. “Because this approach practically overcomes ambiguities in polarization-based shape sensing, it can lead to wider adoption of polarization in the toolkit of machine-vision engineers.”

In an article for Optics.org, Matthew Peach writes that MIT researchers have developed a technique that exploits the polarization of light to improve the quality of 3-D imaging. The technique “could lead to high-quality 3-D cameras integrated into cellphones, and perhaps to the ability to photograph an object and then use a 3-D printer to produce a replica.”