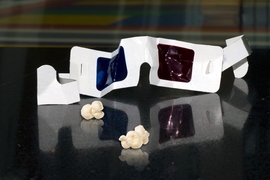 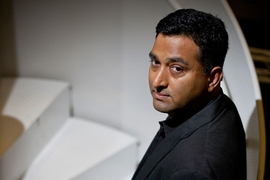 Over the past three years, researchers in the Camera Culture group at the MIT Media Lab have steadily refined a design for a glasses-free, multiperspective, 3-D video screen, which they hope could provide a cheaper, more practical alternative to holographic video in the short term.

Now they’ve designed a projector that exploits the same technology, which they’ll unveil at this year’s Siggraph, the major conference in computer graphics. The projector can also improve the resolution and contrast of conventional video, which could make it an attractive transitional technology as content producers gradually learn to harness the potential of multiperspective 3-D.

Multiperspective 3-D differs from the stereoscopic 3-D now common in movie theaters in that the depicted objects disclose new perspectives as the viewer moves about them, just as real objects would. This means it might have applications in areas like collaborative design and medical imaging, as well as entertainment.

The MIT researchers — research scientist Gordon Wetzstein, graduate student Matthew Hirsch, and Ramesh Raskar, the NEC Career Development Associate Professor of Media Arts and Sciences and head of the Camera Culture group — built a prototype of their system using off-the-shelf components. The heart of the projector is a pair of liquid-crystal modulators — which are like tiny liquid-crystal displays (LCDs) — positioned between the light source and the lens. Patterns of light and dark on the first modulator effectively turn it into a bank of slightly angled light emitters — that is, light passing through it reaches the second modulator only at particular angles. The combinations of the patterns displayed by the two modulators thus ensure that the viewer will see slightly different images from different angles.

The researchers also built a prototype of a new type of screen that widens the angle from which their projector’s images can be viewed. The screen combines two lenticular lenses — the type of striated transparent sheets used to create crude 3-D effects in, say, old children’s books. 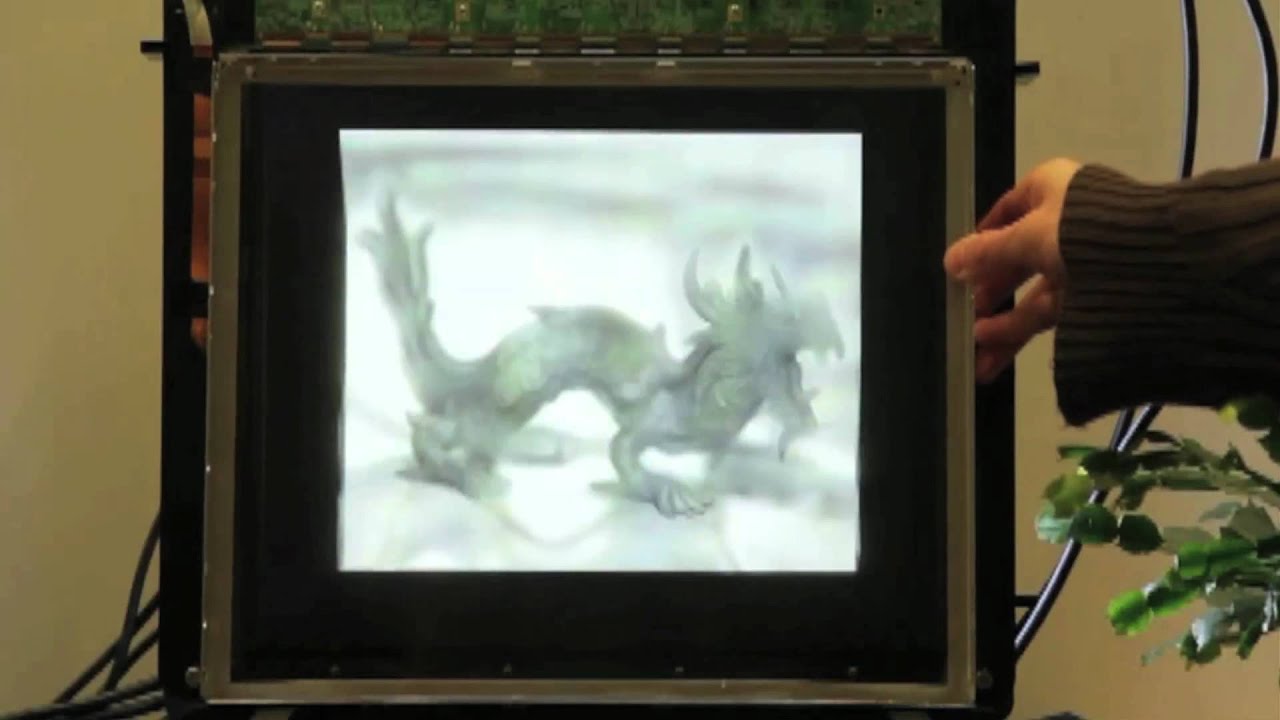 For every frame of video, each modulator displays six different patterns, which together produce eight different viewing angles: At high enough display rates, the human visual system will automatically combine information from different images. The modulators can refresh their patterns at 240 hertz, or 240 times a second, so even at six patterns per frame, the system could play video at a rate of 40 hertz, which, while below the refresh rate common in today’s TVs, is still higher than the 24 frames per second standard in film.

With the technology that has historically been used to produce glasses-free 3-D images — known as a parallax barrier — simultaneously projecting eight different viewing angles would mean allotting each angle one-eighth of the light emitted by the projector, which would make for a dim movie. But like the researchers’ prototype monitors, the projector takes advantage of the fact that, as you move around an object, most of the visual change takes place at the edges. If, for instance, you were looking at a blue mailbox as you walked past it, from one step to the next, much of your visual field would be taken up by a blue of approximately the same shade, even though different objects were coming into view behind it.

Algorithmically, the key to the researchers’ system is a technique for calculating how much information can be preserved between viewing angles and how much needs to be varied. Preserving as much information as possible enables the projector to produce a brighter image. The resulting set of light angles and intensities then has to be encoded into the patterns displayed by the modulators. That’s a tall computational order, but by tailoring their algorithm to the architecture of the graphics processing units designed for video games, the MIT researchers have gotten it to run almost in real time. Their system can receive data in the form of eight images per frame of video and translate it into modulator patterns with very little lag.

Passing light through two modulators can also heighten the contrast of ordinary 2-D video. One of the problems with LCD screens is that they don’t enable “true black”: A little light always leaks through even the darkest regions of the display. “Normally you have contrast of, let’s say, values between 0 and 1,” Wetzstein explains. “That’s the full contrast, but in practice, all modulators have something like 0.1 to 1. So you get this ‘black level.’ But if you multiply two optically together, the black level goes down to 0.01. If you show black on one, which is 10 percent, and black on the other, which is also 10 percent, what you get through is 1 percent. So it’s much more black.”

By the same token, Hirsch explains, if the patterns displayed on the modulators are slightly offset from each other, the light passing through them will interfere with itself in ways that actually heighten the resolution of the resulting images. Again, the researchers have developed an algorithm that can calculate those patterns on the fly.

As content creators move to so-called “quad HD,” video with four times the resolution of today’s high-definition video, the combination of higher contrast and higher resolution could make a commercial version of the researchers’ technology appealing to theater owners, which in turn could smooth the way for the adoption of multiperspective 3-D. “One thing you could do — and this is what actual projector manufacturers have done in the recent past — is take four 1080p modulators and put them next to each other and build some very complicated optics to tile them all seamlessly and then get a much nicer lens because you have to project a much smaller spot and bundle that all up together,” Hirsch says. “We’re saying you could take two 1080p modulators, stick them in your projector one after the other, then take your same old 1080p lens and project through it and use this software algorithm, and you end up with a 4k image. But not only that, it’s got even higher contrast.”

Oliver Cossairt, an assistant professor of electrical engineering and computer science at Northwestern University, once worked for a company that was attempting to commercialize glasses-free 3-D projectors. “What I consider the novelty of [the MIT researchers’] approach involves two things,” Cossairt says. The first, he says, is “playing around with the parallax-barrier idea so that you can make it so that it (a) doesn’t block as much light and (b) gets better resolution.”

The second, he says, is the prototype screen. “There is this invariant of optical systems that says that if you take the area of the plane and the solid angle of light coming out from that plane, that is fixed,” Cossairt says. “What that means is that if you take the 3-D image size and stretch it out to be, let’s say, 10 times as large, then the field of view will decrease by a factor of 10. That’s what we ran into. We couldn’t figure out a way around that.”

“They came up with a screen that instead of stretching the image — which is what projection optics does — essentially moved the pixels away from each other,” Cossairt continues. “That allowed them to break this invariance.”

David Szondy reports on how the MIT Camera Culture Group has developed a new 3-D project system that doesn’t require glasses. Szondy writes that the team sees their system, “as a transitional system that sits between current technologies and true holographic video.”