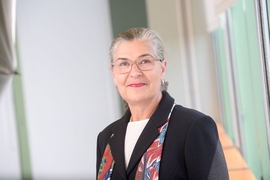 After eight years of leadership defined by significant growth in fundraising and alumni engagement, MIT Alumni Association CEO and Executive Vice President Judith M. Cole has announced her decision to retire from the Institute on June 30.

Her visionary approach to alumni engagement has resulted in significant progress for the Alumni Association, with both alumni engagement and philanthropic support rising to record numbers. In 2016, the MIT Annual Fund raised a record $75.7 million, representing an 82 percent increase over the funds raised eight years earlier, before Cole joined MIT. Similarly, signature Alumni Association events such as Tech Reunions, the Alumni Leadership Conference, and Family Weekend have also set new attendance records during Cole’s tenure.

“Since coming to MIT from Carnegie Mellon in 2009, Judy has focused on inventing new ways to help graduates feel connected to the Institute and to each other,” President L. Rafael Reif wrote in a letter to the MIT community announcing Cole’s retirement. “Whether targeting programs to interest alumni in their first 10 years past graduation, or enabling faculty to speak to MIT Clubs around the world, Judy always had an eye for the distinctive values of MIT.”

Under Cole’s leadership, the Alumni Association has substantially enhanced its offerings to MIT’s community of graduates — a population that now totals more than 134,000 — and to students, parents, and friends of the Institute. She established new programming that proved to be both meaningful to MIT alumni as well as measurable, thanks to her introduction of a novel quantitative system for tracking engagement. This approach led to the creation of popular engagement initiatives such as the Faculty Forum Online and the Faculty Forum Online: Alumni Edition series; MIT Connection events, for alumni 11 to 24 years out from graduation; the Alumni Careers program; and the increased use of social media to reach MIT’s alumni.

She also has worked to integrate the Alumni Association’s mission with that of the Institute, ensuring greater alignment around priorities and increased partnerships across campus — including increased strategic alliance with the Office of Resource Development. Recently, Cole has overseen the Alumni Association’s participation in the launch of the MIT Campaign for a Better World, and the Campaign’s global roadshow series, which has led to strong alumni attendance at events in New York, San Francisco, London, Hong Kong, Tel Aviv, Los Angeles, and Mexico City. This March, the first-ever MIT 24-hour Challenge fundraising event raised $3.8 million from more than 6,000 donors, 2,100 of whom had never made a gift to MIT.

These initiatives, along with the continued popularity of  MIT10 , the Institute’s engagement initiative for undergraduate alumni of the last decade, the online Alumni Directory, and alumni communications outreach, have resulted in recognition from MIT’s higher education peers and more than 20 awards from the Council for Advancement and Support of Education (CASE) received during Cole’s tenure.

Cole notes that these successes have been achieved through the collaborative efforts of all in the Alumni Association — a team that she is proud to have built over the last eight years.

“It has been an honor and a privilege to serve MIT these past eight years,” says Cole, who was honored in January this year with the CASE District I Quarter Century Circle Award. “What I am most proud of, however, is the exceptional team that we have assembled. Advancement is truly a team sport, and we have one of the best teams in the business. They are creative, collaborative, and work tirelessly to engage MIT’s alumni in the life of the Institute.”

“Although I will certainly miss the many friends, volunteers, and colleagues with whom I have worked over the years,” Cole says, “I am deeply grateful for the opportunity to have served such an exceptional community of thinkers, doers, and makers.”