Is the Pax Americana truly peaceful? 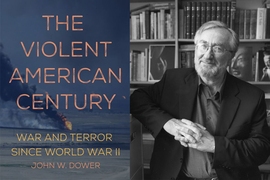 As a series of widely publicized statistics compiled by scholars suggests, warfare and violence have declined dramatically over the last seven decades — constituting a period that historian John Gaddis once termed “the long peace.” Rarely, it seems, have most people been able to live lives of such normalcy. Who would argue with the state of affairs that has produced such results?

John Dower would, for one.

Dower is the Ford International Professor of History, Emeritus, and has won the Pulitzer Prize and National Book Award as part of a career spent writing about topics such as the extreme brutality of World War II combat and the reconstruction of postwar Japan. Today, when he looks at matters of war and security, Dower is skeptical that we have made much progress since then.

“We’re in a perpetual cycle of violence in the name of preventing violence,” Dower says.

Now in Dower’s latest book, “The Violent American Century,” published this spring by Haymarket Books, he questions the foundation of the entire postwar order. As Dower sees it, there may be less warfare today, but our apparent U.S.-led calm is heavily based on a hyperactive militarism. And the vast superiority of American armed forces creates an inherent volatility, Dower thinks, because the U.S. expects to bend international affairs to its will, by virtue of sheer strength.

As such, Dower contends, the U.S. has mistakenly pursued an open-ended “war on terror,” supported too many proxy wars, and risked nuclear annihilation. Our postwar era of relative peace thus hinges in part on good fortune — in avoiding some accidental triggers of nuclear war, for instance — and may be more short-lived than some of us assume.

Dower’s book is a reference to the famous phrase used by TIME magazine founder Henry Luce, who wrote in a 1941 anti-isolationism essay that we were living in “The American Century.”

Dower does acknowledge that, by the basic numbers — compiled by many scholars and research groups such as the Uppsala Conflict Data Program, at Uppsala University in Sweden — we have been safer over the last 70-plus years. On the other hand, Dower adds, the end of World War II would make almost any security regime seem tranquil by contrast. At least 50 million people were killed in World War II, by most estimates; The Correlates of War Project, an academic research inquiry, estimates that over 2 million battle deaths have occurred in almost every decade since then.

“If you go back to World War II, when anywhere between 50 million to 80 million people were killed, of course we're not killing those numbers [of people] now,” says Dower, who also suggests such estimates are inherently imprecise.

The core of Dower’s critique concerns three types of U.S. military activity: proxy wars, the “war on terror,” and the buildup of its nuclear arsenal. In each case, Dower contends, U.S. activity has not simply had deterrent effects; it has also escalated violence or, in the case of the nuclear arms race, the potential consequences of warfare.

In the case of the Cold War-era proxy wars the U.S. led or backed, Dower contends in the book that those campaigns led to “unrestrained devastation” and the “unleashing of massive brute force” that we may still downplay. As he points out, during the Vietnam War, between 1965 and 1973, the U.S. dropped about 40 times the tonnage of bombs on Vietnam, Cambodia, and Laos than it dropped on Japan in World War II.

The U.S. decision to respond to the terrorist attacks of Sept. 11, 2001, Dower thinks, led to a wide-ranging “war on terror” that constitutes a “new kind of war” that has proven to be hydra-headed and has underestimated the political and military resistance in Afghanistan, Iraq, and other parts of the Middle East.

“When we went into Iraq, with the ‘cakewalk’ rhetoric, with that came a real hubris and failure to look at human nature,” Dower says.

Meanwhile the development of nuclear arsenals, Dower observes, is potentially more lethal than anything else people have ever attempted. In the book, he notes both nuclear near-misses and the tendency of some military planners to regard nuclear weapons as “simply the high end of conventional weaponry” when they clearly are in a category by themselves.

“The nuclear arms race is terrifying,” Dower says. “It's a kind of terror, but built into that postwar system.”

All of this, Dower argues, should give people pause about an international edifice that rests so squarely on militarism. But, as he writes in the book, “The myth of exceptionalism still holds most Americans in its thrall.”

To be sure, there are other perspectives on the post-World War II order that give more relative credit to the U.S., and especially its application of “soft power,” the web of diplomatic and economic relationships that help bind other countries in largely peaceful international relationships.

Still other scholarship emphasizes the role of the U.N., the European Union, NATO, and other oragnizations, in reducing intra-European warfare.

Dower says his own experiences as a citizen have forged an intellectual habit of not giving his own country, however much he admires it in general, a free pass on security policy.

“I'm of the generation that was a young adult during the Vietnam war,” Dower explains. “The fire of those years burned a certain impression and way of thinking upon us, and that has influenced me in thinking about violence.”

That legacy, as well as the multitude of U.S. military engagements at the moment, Dower adds, leaves him skeptical that a new security paradigm will emerge any time soon.

On the war path