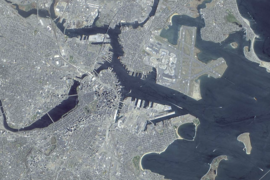 Caption:
This panchromatic-sharpened, natural-color image of Boston was generated from data collected during an April 23, 2001 scan by the Earth-Observing-1's Advanced Land Imager.
Credits:
Image: NASA

Caption:
In this portion of a July 21, 2002 scan of New Orleans, the image has been color-processed to reflect data collected from multiple bands, including infrared, which shows up as the bright red.
Credits:
Image: NASA

Caption:
The panchromatic-band image of the town of Sutton, Alaska, was one of the first images made from ALI data during its inaugural scan on November 25, 2000.
Credits:
Image: NASA

After more than 16 years of operation, NASA's Earth Observing-1 (EO-1) spacecraft was decommissioned on March 30. The EO-1 satellite was a component of NASA's New Millennium Program to validate new technologies that could reduce costs and improve capabilities for future space missions. Aboard EO-1 was the Advanced Land Imager (ALI) instrument developed by MIT Lincoln Laboratory as an alternative to the land-imaging sensor that was used by the Landsat Earth-observing program.

"From its inception, ALI was intended to demonstrate new technologies that would carry on Landsat's more than 30-year legacy of continuous land monitoring while providing substantial size, weight, power, and cost reductions," says Jeffrey Mendenhall, current leader of Lincoln Laboratory's Advanced Imager Technology Group and a member of the ALI development team. "Thirty international Earth science teams evaluated a variety of ALI data — for example, data for agriculture, forestry, urban development, climate, volcanology, glaciology, geology, water management — collected over the first year of operation to assess the instrument's performance relative to Landsat program expectations. The ultimate conclusion was that ALI met, or in many instances, exceeded the Landsat 7 instrument's performance."

ALI not only achieved higher image resolution and quality, it also exhibited greater sensitivity and dynamic range, and realized higher radiometric accuracy. Moreover, compared to the Landsat imager, ALI was only about three-quarters as heavy, occupied two-thirds as much space, consumed one-fifth as much power, and cost significantly less to build.

The EO-1 satellite was launched on November 21, 2000 from Vandenberg Air Force Base in California on a planned one-year mission to collect 2,000 images of Earth. The spacecraft was designed to operate for another year and carried fuel adequate for another five years. However, EO-1 proved to be a workhorse. NASA, in collaboration with the U.S. Geological Survey, National Reconnaissance Office, Naval Research Laboratory, and the National Oceanic and Atmospheric Administration, operated EO-1 for more than 15 years beyond its intended mission life.

ALI has collected more than 90,000 images, many of which were groundbreaking, such as the first mapping of a lava flow from space and the first tracking of regrowth of an Amazon forest as seen from space. During its lifetime, ALI captured many dramatic scenes — depictions of the ash deposits left by the 2001 World Trade Center attacks, flooding caused by Hurricane Katrina in 2005, and the December 2015 eruption of Momotombo volcano in Nicaragua, to name a few.

Lincoln Laboratory's involvement in the EO-1 mission began in January 1994. NASA asked the laboratory to conduct a study to investigate the rapid development of an inexpensive land-imaging mission that could fill the gap in data collection created when the Landsat 6 spacecraft failed to launch. The recommendations of this investigation were not implemented immediately, but the study's findings did inform the later EO-1 sensor design and mission concept. In spring 1994, Lincoln Laboratory began work with NASA's Goddard Space Flight Center to conceive a follow-on to the Landsat Earth-imaging mission. Further collaboration in 1995 with the New Millennium Program and SSG, Inc. led to the design for ALI.

The ALI development was a rigorous, time-intensive program of development, fabrication, system calibration, and preflight testing. "A most significant Lincoln Lab effort was the optomechanical redesign of the telescope structure using three pieces of Invar. The initial intent of an outside vendor was to use an all-silicon carbide design that we found could not be implemented. In a very short period, so as not to compromise a very demanding schedule, Vin Cerrati and Keith Doyle of the [then] Optical Systems Engineering Group redesigned and analyzed the structure to efficiently support the optics and focal plane," recalls Steven Forman of the laboratory's Engineering Division, which provided fabrication support to the lead R&D team from the Aerospace Division.

Lincoln Laboratory delivered ALI to NASA in 1999, and the system was integrated on the EO-1 satellite at Swales Aerospace. Five days after EO-1's 2000 launch, ALI captured its first images of land. Those images showed remarkable detail of Sutton, Alaska, a small town wedged in a dark valley. Later that day, Nov. 25, ALI collected imagery of east Antarctica, the Marshallese island of Roi-Namur, and north-central Australia.

One of the objectives of the ALI demonstration was to evaluate its imagery against that of the Landsat 7 instrument. Thus, EO-1 was maneuvered into orbit to trail Landsat 7 by one minute as it completed 14 orbits each day and repeated the collections every 16 days. Comparison of the ALI and Landsat performances on imaging the same regions at virtually the same times confirmed that the new imager could image Earth at the same level of detail (30 meters per pixel) as the Landsat sensor; however, ALI's set of sensors enabled sharper, photo-like images once the data were processed at the ground station.

ALI's combination of design choices resulted in an innovative system. "The Advanced Land Imager employed a new architecture that eliminated the Landsat scan mirror and implemented new technologies, such as large, modular focal plane arrays and wide-field-of-view optics," says William Brown, head of the Aerospace Division at the time of ALI's development.

To reduce the optical diameter of the sensor, and thus its weight, the laboratory's researchers increased the number of detectors in the focal plane array. This choice allowed a "push-broom" approach to scanning a wide swath of Earth each day. The Landsat system had employed a sensor that collected data in a "whisk broom" mode, i.e., using a single camera that focuses on narrow section of a scene. Such a whisk broom sensor is heavy and expensive, requiring large moving parts that are difficult to stabilize. "By building a focal plane that could be used as a 'push broom' to collect the data as the satellite flies along the ground track, the ALI team demonstrated that the necessary data could be acquired with an instrument that had no moving parts This was a groundbreaking technology advance," says Grant Stokes, head of the laboratory's Space Systems and Technology Division.

In addition, ALI used detectors fabricated from different materials to enable the use of several spectral bands for comprehensive imaging of objects and topography, and the ground data system was automated to permit one operator to quickly acquire and process ALI data.

"The lab's unique understanding of sensor technology and the mission needs enabled a revolutionary technology to be developed for the Landsat program. EO-1 demonstrated technology on orbit that was transferred to industry to enable Landsat 8," Stokes says. The Landsat 8 instrument, the Operational Land Imager, is based on the ALI design and has been in orbit since 2013, collecting valuable data about Earth's surfaces in the visible, near-infrared, and short-wave infrared bands.

When, on March 30, EO-1's operation ended, NASA had shut down the satellite by depleting its fuel, stopping all moving parts, discharging the battery, and turning off the transmitter. EO-1's orbit will slowly degrade and, in approximately 39 years, EO-1 will reenter Earth's atmosphere, where it is expected to fragment and then burn up.

EO-1 has had a great run. It changed the way spectral measurements are made and used by the scientific community, according to Betsy Middleton, EO-1's project scientist at NASA's Goddard Space Flight Center. EO-1 has also validated new concepts and systems for science missions, and has offered us intriguing, spectacular views of Earth.