Disorder can be good

Caption:
MIT aerospace researchers have demonstrated that some randomness in the arrangement of carbon atoms makes materials that are lighter and stronger, shown at lower right in illustration, compared to a more densely packed and tightly ordered structure, shown lower left. They formed a type of disordered graphite-like carbon material that is often called glassy carbon by “baking” a phenol-formadehyde hydrocarbon precursor at high temperature in inert gas, a process commonly known as pyrolysis.
Credits:
Illustration: Itai Stein

In the quest for more efficient vehicles, engineers are using harder and lower-density carbon materials, such as carbon fibers, which can be manufactured sustainably by "baking" naturally occurring soft hydrocarbons in the absence of oxygen. However, the optimal "baking" temperature for these hardened, charcoal-like carbon materials remained a mystery since the 1950s when British scientist Rosalind Franklin, who is perhaps better known for providing critical evidence of DNA’s double helix structure, discovered how the carbon atoms in sugar, coal, and similar hydrocarbons, react to temperatures approaching 3,000 degrees Celsius (5,432 degrees Fahrenheit) in oxygen-free processing. Confusion over whether disorder makes these graphite-like materials stronger, or weaker, prevented identifying the ideal "baking" temperature for more than 40 years.

Fewer, more chaotically arranged carbon atoms produce higher-strength materials, MIT researchers report in the journal Carbon. They find a tangible link between the random ordering of carbon atoms within a phenol-formaldehyde resin, which was “baked” at high temperatures, and the strength and density of the resulting graphite-like carbon material. Phenol-formaldehyde resin is a hydrocarbon commonly known as “SU-8” in the electronics industry. Additionally, by comparing the performance of the “baked” carbon material, the MIT researchers identified a “sweet spot” manufacturing temperature: 1,000 C (1,832 F).

“These materials we’re working with, which are commonly found in SU-8 and other hydrocarbons that can be hardened using ultraviolet [UV] light, are really promising for making strong and light lattices of beams and struts on the nanoscale, which only recently became possible due to advances in 3-D printing,” says MIT postdoc Itai Stein SM ’13, PhD ’16. “But up to now, nobody really knew what happens when you’re changing the manufacturing temperature, that is, how the structure affects the properties. There was a lot of work on structure and a lot of work on properties, but there was no connection between the two. ... We hope that our study will help to shed some light on the governing physical mechanisms that are at play.”

“Our investigations into this carbon material as a matrix for nanocomposites kept leading to more questions making this topic increasingly interesting in and of itself. Through a series of contributions, notably from MIT undergraduate researchers and Summer Scholars, a sustained investigation of several years resulted, allowing some paradoxical results in the extant literature to be resolved,” Wardle says. 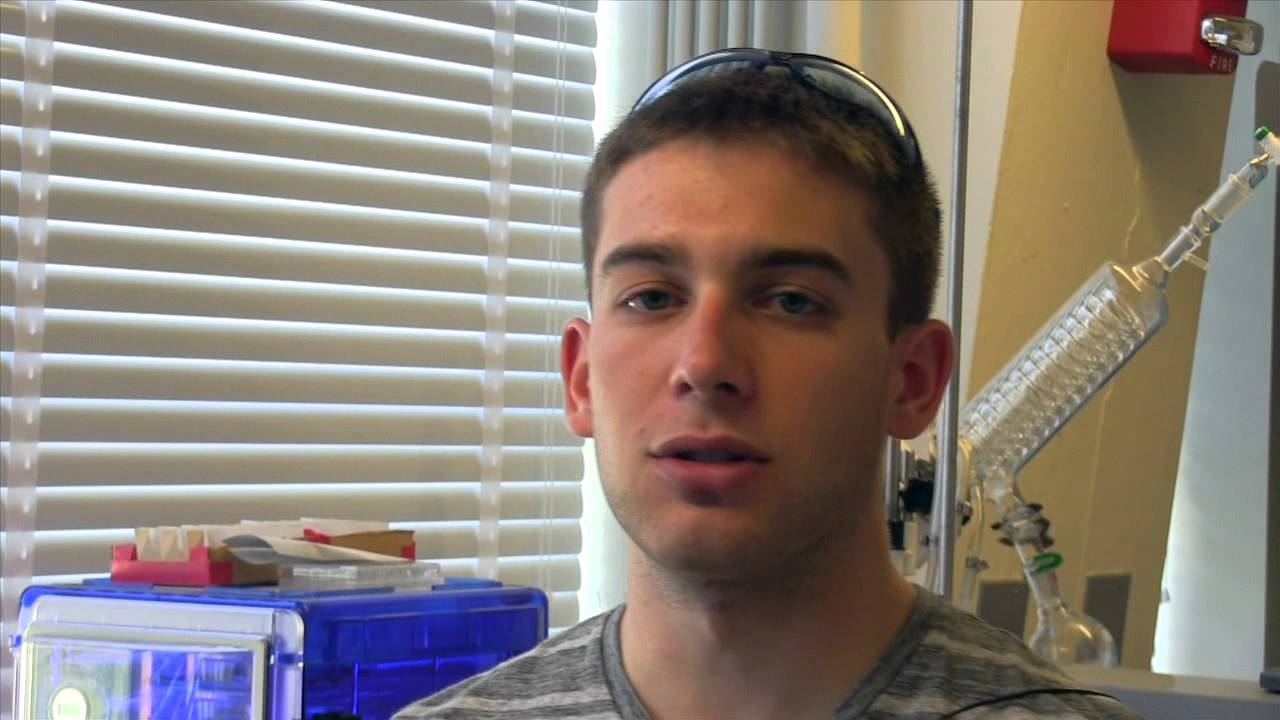 Play video
Alexander Constable, a recent MIT Materials Processing Center/Center for Materials Science and Engineering Summer Scholar, explains his 2015 internship under professor of aeronautics and astronautics Brian Wardle. Constable heats a mixture of resin and carbon nanotubes to make and characterize a hard, glassy carbon material that promises lighter and stronger materials for aerospace uses. His work in this area appears in a new scientific publication led by MIT postdoc Itai Stein.

By “baking” the resin at high temperature in inert gas, a process commonly known as pyrolysis, the researchers formed a type of disordered graphite-like carbon material that is often called glassy carbon. Stein and Wardle showed that when it is processed at temperatures higher than 1,000 C, the material becomes more ordered but weaker. They estimated the strength of their glassy carbon by applying a local force and measuring their material's ability to resist deformation. This type of measurement, which is known to engineers as the Vickers hardness test, is a highly versatile technique that can be used to study a wide variety of materials, such as metals, glasses, and plastics, and enabled the researchers to compare their findings to many well-known engineering materials that include diamond, carbon fiber composites, and metal carbides.

The carbon atoms within the MIT researchers' material were more chaotically organized than is typical for graphite, and this was because phenol-formaldehyde with which they started is a complicated mix of carbon-rich compounds. “Because the hydrocarbon was disordered to begin with, a lot of the disorder remains in your crystallites, at least at this temperature,” Stein explains. In fact, the presence of more complex carbon compounds in the material strengthens it by leading to three-dimensional connections that are hard to break. “Basically you get pinned at the crystallite interface, and that leads to enhanced performance,” he says.

These high-temperature baked materials have only one carbon atom in their structure for every three in a diamond structure. “When you’re using these materials to make nanolattices, you can make the overall lattice even less dense. Future studies should be able to show how to make lighter and cheaper materials,” Stein suggests. Hydrocarbons similar to the phenol-formaldehyde studied here can also be sourced in an environmentally friendly way, he says.

“Up until now there wasn’t really consensus about whether having a low density was good or bad, and we’re showing in this work, that having a low density is actually good,” Stein says. That’s because low density in these crystallites means more molecular connections in three dimensions, which helps the material resist shearing, or sliding apart. Because of its low density, this material compares favorably to diamond and boron nitrides for aerospace uses. “Essentially, you can use a lot more of this material and still end up saving weight overall,” Stein says.

“This study represents sound materials science — connecting all three facets of synthesis, structure, and property — toward elucidating poorly understood scaling laws for mechanical performance of pyrolytic carbon,” says Eric Meshot, a staff scientist at Lawrence Livermore National Laboratory, who was not involved in this research. “It is remarkable that by employing routinely available characterization tools, the researchers pieced together both the molecular and nanoscale structural pictures and deciphered this counterintuitive result that more graphitization does not necessarily equal a harder material. It is an intriguing concept in and of itself that a little structural disorder can enhance the hardness.”

“Their structural characterization proves how and why they achieve high hardness at relatively low synthesis temperatures,” Meshot adds. “This could be impactful for industries seeking to scale up production of these types of materials since heating is a seriously costly step.” The study also points to new directions for making low-density composite structures with truly transformative properties, he suggests. “For example, by incorporating the starting SU-8 resin in, on, or around other structures (such as nanotubes as the authors suggest), can we synthesize materials that are even harder or more resistant to sheer? Or composites that possibly embed additional functionality, such as sensing?” Meshot asks.

The new research has particular relevance now because a group of German researchers showed last year in a Nature Materials paper how these materials can form highly structured nanolattices that are strong, lightweight, and are outperformed only by diamond. Those researchers processed their material at 900 C, Stein notes. “You can do a lot more optimization, knowing what the scaling is of the mechanical properties with the structure, then you can go ahead and tune the structure accordingly, and that’s where we believe there is broad implication for our work in this study,” he says.