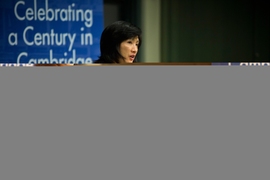 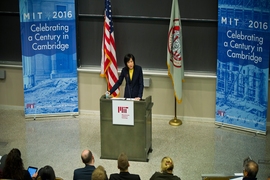 ↓ Download Image
Caption: Lee says that patent information has always been open to the public, but it “wasn’t always easily accessible,” which new initiatives aim to change.

Caption:
Lee says that patent information has always been open to the public, but it “wasn’t always easily accessible,” which new initiatives aim to change.
Credits:
Photo: Dominick Reuter

Michelle K. Lee, under secretary of commerce for intellectual property and director of the United States Patent and Trademark Office (USPTO), announced new initiatives that should provide easier access to troves of useful patent data, during a day-long visit to MIT on Thursday.

“This will allow all the players in the innovation ecosystem to have better information to make smarter decisions,” Lee said.

The measures Lee described include the USPTO’s first-ever release of application program interfaces (APIs), tools that can be used to build applications that mine the office’s data for useful information about existing patents.

“Anyone with even the most basic programming experience will be able to explore our data according to their own interests, curiosity, and business needs,” Lee said.

The USPTO will also launch what it is calling an Open Data Portal, where users of the database can share the ways they are digging into the office’s information.

To be clear, as Lee added, patent information has always been open to the public, but it “wasn’t always easily accessible,” which the initiatives aim to change.

The new tools are also part of a broader USPTO push to deploy its own data to good use; as Lee noted, such an approach can help the office’s 8,300 examiners achieve better consistency in their analyses of which innovations merit patents and which do not.

Lee’s lecture, titled “On the Front Lines of Promoting Innovation: From MIT to Washington, D.C.,” was delivered before an audience of about 250 people in MIT’s Huntington Hall (Room 10-250).

The event was sponsored by MIT’s Office of the Vice President for Research — headed by Maria Zuber, MIT’s vice president for research, who introduced Lee at her talk — and by MIT’s Science Policy Initiative.

From computer science to the law

Lee is an MIT graduate who studied computer science with Hal Abelson, MIT’s Class of 1922 Professor of Computer Science and Engineering. Having at one point expected to complete graduate studies in computer science at MIT, she instead opted to focus on the legal and policymaking aspects of technological innovation.

Lee said she was influenced in this regard by the famous court case between Apple and Microsoft, spanning the late 1980s and early 1990s, which concerned the extent to which the graphical user interface elements of Apple’s operating system could be copyrighted. As a result, she opted to attend law school at Stanford University.

“Hopefully Hal has forgiven me for this transgression,” Lee quipped, with Abelson in attendance for her talk.

Lee is the first woman to serve as director of the U.S. Patent and Trademark Office. She previously served as deputy director and was the first director of the USPTO’s Silicon Valley regional office. Among other private-sector positions, Lee spent nearly a decade at Google, where she was deputy general counsel and head of patents and patent strategy.

In her remarks, Lee broadly emphasized the value of a robust patenting system, noting that “the system we use to protect and enforce IP [intellectual property] rights is critical to protecting investment and American competitiveness.”

Industries that rely heavily on intellectual property, Lee noted, support around 40 million jobs and more than one-third of the U.S. gross domestic product; in Massachusetts, she added, about 22 percent of all jobs exist in “IP-intensive industries,” making it one of the top five American states in that regard.

Even so, Lee acknowledged, there is a “fundamental balance that I believe the patent system must achieve,” between issuing patents to incentivize innovation, on the one hand, and making sure patents are not too restrictive, on the other, so that further improvements to existing technologies can also be rewarded.

In this regard, Lee said, she wants the USPTO to continue to use new tools, such as automated search technologies, to quickly pinpoint the most relevant “prior art” — patented innovations — so that patents examiners can make consistent judgments more efficiently.

The USPTO, Lee said, receives about 600,000 patent applications annually and has about 1 million cases open at any given time.

Many of those applications come from new companies, whose development is a crucial part of spurring economic growth in general.

“We want more startups to succeed because their success benefits all of us,” Lee said.

In a conversation with MIT News after her public talk, Lee underscored the value of having students who aspire to found startups gain a working knowledge of intellectual property issues, and said she was glad to have met with MIT undergraduates during her visit.

Regarding the condition of innovation-based growth in the region, Lee added: “Everyone’s trying to encourage more economic development and innovation, but I think there are a lot of pieces that are coming together very nicely both at MIT and in the city of Boston, so I’m very excited for the USPTO to support that. Because I think we are one piece of that ecosystem that is necessary.”

Alumna Michelle Lee, director of the USPTO, speaks with Radio Boston’s Anthony Brooks during a trip to Boston to speak at MIT about patents and innovation. Lee noted her commitment to encouraging more females to pursue STEM fields because “you never know who’s going to start that next company that’s going to revolutionize the world.”