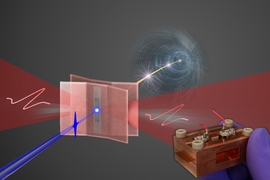 ↓ Download Image
Caption: This illustration shows a miniature electron gun driven by terahertz radiation. A UV pulse (blue) back-illuminates the gun photocathode, producing a high-density electron bunch inside the gun. The bunch is immediately accelerated by ultra-intense terahertz pulses to energies approaching 1 kiloelectronvolt. These high-field optically-driven electron guns can be utilized for ultrafast electron diffraction or injected into the accelerators for X-ray light sources.

Caption:
This illustration shows a miniature electron gun driven by terahertz radiation. A UV pulse (blue) back-illuminates the gun photocathode, producing a high-density electron bunch inside the gun. The bunch is immediately accelerated by ultra-intense terahertz pulses to energies approaching 1 kiloelectronvolt. These high-field optically-driven electron guns can be utilized for ultrafast electron diffraction or injected into the accelerators for X-ray light sources.
Credits:
Courtesy of W. Ronny Huang

Ultrashort bursts of electrons have several important applications in scientific imaging, but producing them has typically required a costly, power-hungry apparatus about the size of a car.

In the journal Optica, researchers at MIT, the German Synchrotron, and the University of Hamburg in Germany describe a new technique for generating electron bursts, which could be the basis of a shoebox-sized device that consumes only a fraction as much power as its predecessors.

Ultrashort electron beams are used to directly gather information about materials that are undergoing chemical reactions or changes of physical state. But after being fired down a particle accelerator a half a mile long, they’re also used to produce ultrashort X-rays.

Last year, in Nature Communications, the same group of MIT and Hamburg researchers reported the prototype of a small “linear accelerator” that could serve the same purpose as the much larger and more expensive particle accelerator. That technology, together with a higher-energy version of the new “electron gun,” could bring the imaging power of ultrashort X-ray pulses to academic and industry labs.

Indeed, while the electron bursts reported in the new paper have a duration measured in hundreds of femtoseconds, or quadrillionths of a second (which is about what the best existing electron guns can manage), the researchers’ approach has the potential to lower their duration to a single femtosecond. An electron burst of a single femtosecond could generate attosecond X-ray pulses, which would enable real-time imaging of cellular machinery in action.

“We’re building a tool for the chemists, physicists, and biologists who use X-ray light sources or the electron beams directly to do their research,” says Ronny Huang, an MIT PhD student in electrical engineering and first author on the new paper. “Because these electron beams are so short, they allow you to kind of freeze the motion of electrons inside molecules as the molecules are undergoing a chemical reaction. A femtosecond X-ray light source requires more hardware, but it utilizes electron guns.”

In particular, Huang explains, with a technique called electron diffraction imaging, physicists and chemists use ultrashort bursts of electrons to investigate phase changes in materials, such as the transition from an electrically conductive to a nonconductive state, and the creation and dissolution of bonds between molecules in chemical reactions.

Ultrashort X-ray pulses have the same advantages that ordinary X-rays do: They penetrate more deeply into thicker materials. The current method for producing ultrashort X-rays involves sending electron bursts from a car-sized electron gun through a billion-dollar, kilometer-long particle accelerator that increases their velocity. Then they pass between two rows of magnets — known as an “undulator” — that converts them to X-rays.

In the paper published last year — on which Huang was a coauthor — the MIT-Hamburg group, together with colleagues from the Max Planck Institute for the Structure and Dynamics of Matter in Hamburg and the University of Toronto, described a new approach to accelerating electrons that could shrink particle accelerators to tabletop size. “This is supposed to complement that,” Huang says, about the new study.

Franz Kärtner, who was a professor of electrical engineering at MIT for 10 years before moving to the German Synchrotron and the University of Hamburg in 2011, led the project. Kärtner remains a principal investigator at MIT’s Research Laboratory of Electronics and is Huang’s thesis advisor. He and Huang are joined on the new paper by eight colleagues from both MIT and Hamburg.

The researchers’ new electron gun is a variation on a device called an RF gun. But where the RF gun uses radio frequency (RF) radiation to accelerate electrons, the new device uses terahertz radiation, the band of electromagnetic radiation between microwaves and visible light.

The researchers’ device, which is about the size of a matchbox, consists of two copper plates that, at their centers, are only 75 micrometers apart. Each plate has two bends in it, so that it looks rather like a trifold letter that’s been opened and set on its side. The plates bend in opposite directions, so that they’re farthest apart — 6 millimeters — at their edges.

At the center of one of the plates is a quartz slide on which is deposited a film of copper that, at its thinnest, is only 30 nanometers thick. A short burst of light from an ultraviolet laser strikes the film at its thinnest point, jarring loose electrons, which are emitted on the opposite side of the film.

The key to the system is that the tapering of the plates confines the terahertz radiation to an area — the 75-micrometer gap — that is narrower than its own wavelength. “That’s something special,” Huang says. “Typically, in optics, you can’t confine something to below a wavelength. But using this structure we were able to. Confining it increases the energy density, which increases the accelerating power.”

Because of that increased accelerating power, the device can make do with terahertz beams whose power is much lower than that of the radio-frequency beams used in a typical RF gun. Moreover, the same laser can generate both the ultraviolet beam and, with a few additional optical components, the terahertz beam.

According to James Rosenzweig, a professor of physics at the University of California at Los Angeles, that’s one of the most attractive aspects of the researchers’ system. “One of the main problems you have with ultrafast sources like this is timing jitter between, say, the laser and accelerating field, which produces all sorts of systematic effects that make it harder to do time-resolved electron diffraction,” Rosezweig says.

“In the case of Kärtner’s device, the laser produces the terahertz and also produces the photoelectrons, so the jitter is highly suppressed. You could do pump-probe experiments where the laser is the driver and the electrons would be the probe, and they would be more successful than what you have right now. And of course it would be a very small-sized and modest-cost device. So it might turn out to be very important as far as that scenario goes.”

The researchers’ work was funded by the U.S. Air Force Office of Scientific Research and by the European Research Council. Ronny Huang was supported by a National Defense Science and Engineering Graduate fellowship.