Caption:
The 2015 MIT Flugtag team posed with the glider they built for the competition in Portland, Oregon. Unfortunately, an overabundance of spectator boats on the Willamette River caused the Coast Guard to shut down the event before the team’s turn to fly.
Credits:
Photo courtesy of the MIT Flugtag team.

Caption:
The annual Red Bull Flugtag event places as much emphasis on wacky showmanship as it does on flying aircraft. At the 2015 Flugtag, MIT’s team, the “Monkey Ballers” (derived from the old video game “Super Monkey Ball”) attired themselves in banana costumes and similarly decorated their glider’s launch vehicle.

When several Department of Aeronautics and Astronautics (AeroAstro) students read of an event that dares “the brave and brainy to design, build and pilot home-made flying machines off a 28-foot high flight deck in hopes of soaring into the wild blue yonder,” there was no way they could not take up the challenge.

“It sounded like the perfect project, epitomizing the creative, fun-loving, challenge-embracing mantra of the MIT aerospace engineer,” says AeroAstro grad student Billy Thalheimer. “We were all over it.”

The event is Red Bull Flugtag (“flugtag” being German for “flight day” or “airshow”), a competition in which teams design and build a manned glider, and then, in a public event, push the aircraft off a 30-foot tall elevated runway to see who can fly the farthest — that is, if they can fly at all. The runway is constructed over a body of water so plane and pilot eventually end up in a dunking, no matter how far they fly. 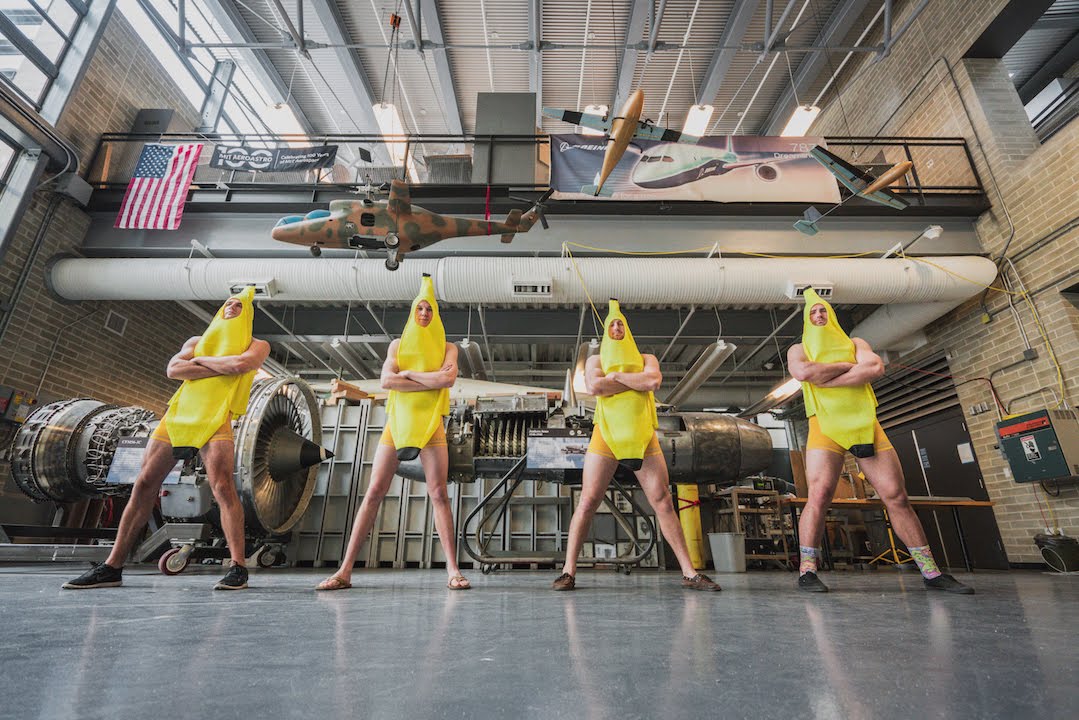 Since its inception in 1991, the competition has been held in cities around the world, and on August 20, it’s coming to Boston. The runway/launch pier will be constructed over the Charles River in proximity to the Hatch Shell. More than 30 teams are expected to enter.

The AeroAstro Flugtag team, which calls itself “the Monkey Ballers,” consists of Thalheimer, the team captain; fellow AeroAstro grad students Hayden Cornwell, Michael Klinker, and Alex Feldstein; and Mike Tomovich SM ’14, a graduate of the Department of Electrical Engineering and Computer Science.

Flugtag rules specify aircraft with no more than a 24-foot wingspan, which must be propelled entirely by four pushers running behind it. There may be no energy storage devices, no springs or batteries, no catapults, and no pulleys. The aircraft must be entirely passive: No propellers or flapping or other propulsive devices are allowed. In a sense, it is as pure as aircraft design challenges come: Build a fixed-wing craft to maximize distance under arduously difficult constraints.

Given these restrictions, it’s no surprise that, upon launch, most entries plunge immediately into the water. Occasionally, a team does its aerodynamic diligence and creates a glider that does, in fact, glide. Such was the case in 2013, when a team set the world record distance of 258 feet in Long Beach, California. This year, the Monkey Ballers (named, at least in part, after the old “Super Monkey Ball” video game) will attempt to break that record, and, as MIT aerospace students, they should have the technical know-how to do so.

Team members say that the challenge in building a constrained-wingspan aircraft to carry a relatively heavy weight (the pilot) at a slow speed is simple: air is not that thick. When an aircraft flies too slowly or has to lift too much, the air that was previously flowing nicely over its wings will detach from the wing surface, causing the airplane to lose most of its lift in a phenomenon known as stall. To prevent the stalling that has plagued many past Flugtag craft, the Monkey Ballers are targeting three of its sources in their design. To reduce weight, the craft will be made of a carbon-fiber skeleton. The wing design features foam ribs wrapped with mylar about as thick as a piece of paper. To increase launch speed, the plane will be fitted with a catapult the pilot will trigger just as he leaves the launch ramp. And, to directly attack stall, there will be a massively oversized wing, large winglets, and custom airfoils to ensure the airflow, and therefore the flight, stays smooth.

In fact, 2016 will not mark the first year the Monkey Ballers have participated in the Flugtag. Last year, the team had an entry in a Portland, Oregon competition. The team’s design process involved detailed structural and aerodynamic analysis and the airframe featured Mylar-wrapped carbon-fiber/foam wings. In all, the aircraft, designed to carry a 165-pound pilot, weighed less than 50 lbs.

Unfortunately, despite all the team’s work, it never managed to participate in the competition. Boat traffic from the 100,000 spectators blockaded the Willamette River and, before the Monkey Baller’s turn arrived, the the Coast Guard shut down the event. As the only team fully staffed with degree-holding aerospace engineers, and therefore, considered favorites, the Monkey Ballers were stationed towards the end of the launch order, and their flying machine was never to see her maiden voyage.

For the 2016 Boston challenge, the stage is ripe for MIT victory. Armed with a year of composites-manufacturing and ultralight-design experience, and with the support and expertise of the AeroAstro community behind them, the team enters Flugtag 2016 as a true favorite. They have developed a new design, incorporated new materials and simulation procedures, and enlisted the services of a lighter pilot, all in efforts to take home the gold in front of the expected 100,000 spectators watching from the Esplanade.

The Monkey Ballers’ approach this year also includes a greater focus on public outreach. As team members are current or former MIT students, so they will be working to involve the Institute as much as possible. The aircraft will be assembled on the MIT campus in AeroAstro’s Building 33 Gerhardt Neumann Hangar, so the build process will be prominently on display for all current and prospective members of the MIT community. The team expects the project will show spectators the sort of fun and crazy projects that become available with the help of MIT resources.

The team estimates that it will cost about $15,000 to complete development and construction of its aircraft, funding for which it has turned to Crowdfund MIT, an Institute resource that helps students, faculty, staff, and alumni finance projects. In addition to financial support, the team also welcomes in-kind contributions, such as engineering mentorship, facilities use, and hardware donations. With a fresh approach and an MIT community backing, the Monkey Ballers plan to turn this playful competition into a serious demonstration of MIT AeroAstro’s technological prowess.

Says team captain Thalheimer: “This is a quintessential MIT project. We’ll take a zany, comedic challenge from Red Bull, apply our rigorous MIT AeroAstro education to it, and take it over as only MIT hackers can do.”

Getting real — on Mars

Tackling challenges at the intersection of engineering and sports