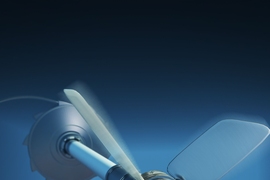 ↓ Download Image
Caption: Any system in thermodynamic equilibrium is known to satisfy perfectly balanced forward and backward transitions between any two states. It is therefore impossible, for instance, to drive a windmill to do work by using only thermal fluctuations. The new research shows how living systems violate this principle. Thus, even stochastic fluctuations in such living systems could be used to drive such a small-scale windmill.

Caption:
Any system in thermodynamic equilibrium is known to satisfy perfectly balanced forward and backward transitions between any two states. It is therefore impossible, for instance, to drive a windmill to do work by using only thermal fluctuations. The new research shows how living systems violate this principle. Thus, even stochastic fluctuations in such living systems could be used to drive such a small-scale windmill.
Credits:
Image: C. Hohmann and M. Leunissen

Inside every living cell, internal structures are continuously moving about. Under a microscope, organelles such as the nucleus, mitochondria, transport vesicles, or even external flagella wobble and twitch. This may happen spontaneously as these tiny structures are passively jostled inside a cell. But that’s not necessarily all there is to it. Often a cell invests extra energy into these motions to enhance cell functions in ways we don’t yet understand.

At the microscopic scale, particles in a fluid or a gas can move about in response to bombardment by the surrounding molecules. Such passive, thermally-induced motions are often very hard to distinguish from actively driven movements, and it can be impossible to tell just by looking whether particular motions inside a cell are simply thermal or pushed by some extra input of energy.

Now scientists at MIT, the University of Göttingen, Ludwig Maximilians University of Munich, the Free University Amsterdam, and Yale University have developed a noninvasive data analysis technique that can discern whether an object’s random motion is actively or thermally driven. After tracking the conformations or locations that a structure within the cell or a particle passes through as it moves, and observing how the particle transitions back and forth between such states, the researchers apply a fundamental principle of statistical physics to determine whether the random motions are active or thermal.

“We want to see if particular dynamics in living systems — be those cells or tissues or whole organisms — that look at first glance like random thermal motion are indeed actively driven,” says Fakhri, who is a first co-author on the paper. “This is important because there must be a vital function connected with the process if the cell spends energy on it. Our work provides a practical experimental method to identify active, nonequilibrium processes in observations of biological systems.”

Fakhri and her colleagues have published their results today in the journal Science.

Researchers at MIT and elsewhere have developed a noninvasive technique that distinguishes active from passive fluctuations inside cells.

Observations of the movements of microscopic particles date back to 1827, when Scottish botanist Robert Brown was looking through a microscope at pollen grains in water. He noticed that the grains contained tiny particles that jiggled vigorously, and at first glance believed that their motion meant the particles were somehow alive and moving on their own. Eventually, Brown retired this theory when he observed the same jiggling with inert particles from rocks, realizing that just seeing a particle moving doesn’t necessarily mean it is alive.

Scientists now know that such particles are being pushed around by even smaller water molecules, which themselves are jiggling. At elevated temperatures, water molecules possess kinetic energy and can remain forever restless. At microscopic scales, these tiny molecules and atoms can “bombard” other much larger particles. This phenomenon is now known as Brownian motion. Scientists today are so used to seeing Brownian motion that they often assume that a particle moving in a random fashion is likely to be at thermal equilibrium — a state in which a system is not dissipating any energy, and therefore inanimate.

In living cells, of course, many organelles or particles tend to move in a “ballistic” fashion, traveling across some distance, with a clearly directed or oscillatory trajectory. These types of motions, Fakhri says, represent an animated state that must be out of equilibrium, requiring a system to expend energy. What is interesting, however, are situations where particles jiggle randomly and seem to be in equilibrium, but in reality move actively.

Fakhri and her colleagues set out to develop a statistical physics technique that would enable them to tell, just by imaging a particle, whether its random motions are thermal or active in nature.

Next, they analyzed the motions of a kidney cell’s cilium — an antenna-like appendage that at first glance appears to be jiggling back and forth passively. By tracking the cilium’s orientation and curvature, and counting transitions between states, they observed a slight imbalance in the transitions, pointing to an unexpected active process that drives the cilium, despite its passive appearance.

“This is a great paper, and somewhat a proof of principle,” says Gavin Crooks, senior scientist at Lawrence Berkeley National Laboratory. “Their method has the potential to be applicable to lots of cellular processes — we'll get deeper insights into the flow of information and energy through the cell, and what makes these molecule machines tick. You could imagine using these methods to examine if a piece of cellular machinery is working the way that it's meant to.”

Fakhri says the new method will help scientists to uncover new ways in which cells dissipate energy — which, ultimately, is the key to sustaining life. After all, as the Austrian physicist Erwin Schrödinger noted, “Living matter evades the decay to thermal equilibrium.”

“Almost a century later, through the work of this collaboration, we can now go further and find out how cells budget their energy and particularly why they often expend a lot of energy to create these apparently random motions,” Fakhri says.

This research was funded, in part, by the International Human Frontier Science Program.