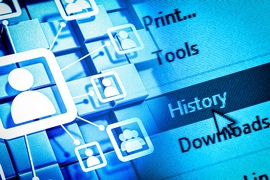 ↓ Download Image
Caption: “Data has traditionally been used by anyone from corporations to the government,” Mor Naaman says. “But the goal of this system is to make the data more useful for the individuals themselves, to give them more control, and to make it more useful to communities.”

Caption:
“Data has traditionally been used by anyone from corporations to the government,” Mor Naaman says. “But the goal of this system is to make the data more useful for the individuals themselves, to give them more control, and to make it more useful to communities.”
Credits:
Image: Jose-Luis Olivares/MIT

Caption:
The website also provides visualization tools that allow users to view both their own browsing histories and those of the Eyebrowse community at large, as graphs, pie charts, and “word clouds” that represent the frequency with which particular words turn up in the sites visited by Eyebrowse users.

Researchers at MIT’s Computer Science and Artificial Intelligence Laboratory (CSAIL) have developed a new system that allows Web users to share self-selected aspects of their online activity with their friends and the general public. The hope is to give users themselves, as well as academics and other scientists conducting research in the public interest, access to the same type of browsing data that big Web companies currently collect and mine to better target products to individual consumers.

The researchers also hope that systems like theirs could encourage changes in the regulatory environment that would give Web users more control over which of their data are collected and how they’re used.

They describe the new system, which they’ve dubbed Eyebrowse, in a paper presented last week at the Association for Computing Machinery’s conference on Computer-Supported Cooperative Work and Social Computing, in San Francisco. The paper also describes the results of a survey of potential end users, which helped guide the system’s design, and of a field trial of the system. The findings suggest that Web users could, indeed, find it worth their while to share data about their online activities.

“We thought of a pretty long list of specific applications of this data that were useful to the end user,” says David Karger, an MIT professor of electrical engineering whose group began developing the system in 2010. “Awareness of where your friends are, the ability to run into them, the ability to go somewhere and discover that they were there before, and you may want to talk to them about this thing that you both saw. There’s the ability to discover what’s popular, in a very broad way. There’s collaborative filtering.”

“Then there’s global analytics,” Karger continues. “Google has this interesting 50,000-foot view of the Internet, because they know all the clicks. Most people don’t. There are lots of interesting questions about social dynamics. What are Democrats reading? You can’t answer that question right now. There are things that the population as a whole would be interested in knowing, and also things that scholars would be interested in knowing.”

“The trackers don’t give us a choice about what gets tracked,” he adds. “And I’d really like to demonstrate that giving people a choice has positive benefits. And maybe someday that will turn into legislation that says that people have the right to decide whether they get tracked or not, in certain circumstances. If people do buy into voluntary tracking, then maybe we don’t need involuntary tracking, and that would be pretty wonderful.”

For the past year and half, the lead researcher on the Eyebrowse project has been Amy Zhang, an MIT graduate student in electrical engineering and computer science and first author on the new paper. She’s joined by Karger, who is her thesis advisor, and by Joshua Blum, who received his master’s in electrical engineering and computer science from MIT this year.

Eyebrowse currently consists of two components: a website and an extension to Google’s Chrome Web browser. Installing the extension involves two mouse clicks and takes seconds. Thereafter, anytime the user visits a Web page, clicking the Eyebrowse icon on the browser task bar will pull down a window offering an array of features.

One is the opportunity to add the site’s domain name to the user’s “whitelist.” As long as the Eyebrowse extension is turned on, the system will record the user’s visits to pages on whitelisted sites. But the pull-down window also features a switch for turning Eyebrowse off, for private browsing. (The Eyebrowse icon, an open eye, “closes” when the system is off.) Similarly, it offers a button for reporting visits to sites not on the whitelist.

The pull-down window also lists which members of the Eyebrowse community have visited the page and when, any annotations that they have made to the page, a field that allows the user to make his or her own annotations, and a chat window for Eyebrowse users.

The website also provides visualization tools that allow users to view both their own browsing histories and those of the Eyebrowse community at large, as graphs, pie charts, and “word clouds” that represent the frequency with which particular words turn up in the sites visited by Eyebrowse users.

The field trial involved 24 users, who used the system for varying lengths of time, from a week to almost three months. Most shared between 10 and 25 links a day, but participants whose friends were also using the system tended to share more, as many as 60 or even 80 links a day.

“What we have built in terms of potential applications only scratches the surface of what is possible with this data,” Zhang says. “That’s why the data that people have contributed to Eyebrowse is available in an API [application program interface] on the website for anyone to build on top of or analyze.”

“Data has traditionally been used by anyone from corporations to the government,” says Mor Naaman, an associate professor of information science at Cornell University’s new Cornell Tech campus in New York City. “But the goal of this system is to make the data more useful for the individuals themselves, to give them more control, and to make it more useful to communities.”

“In previous research, we found that it’s difficult for users to cognitively manage all these different privacy settings, remembering what they mean and when and how to apply them,” Naaman cautions. “I think that will be something to address going forward. But there is potential, and I hope to eventually see it in a commercial product.”

MIT researchers have developed a tool, dubbed Eyebrowse, that allows users control over how their Internet activity is shared, reports Dan Misener for CBC News. Graduate student Amy Zhang explains that without a tool like Eyebrowse “people that actually create the data don't get to see their own data.”