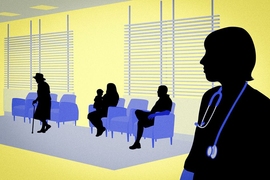 ↓ Download Image
Caption: Arsenal Health developed a schedule-optimization service for health care providers that analyzes scheduling and other data to predict which patients might not show up to appointments. Health-care providers can then double-book over those potential no-show patients or prioritize their outreach as needed.

Caption:
Arsenal Health developed a schedule-optimization service for health care providers that analyzes scheduling and other data to predict which patients might not show up to appointments. Health-care providers can then double-book over those potential no-show patients or prioritize their outreach as needed.
Credits:
Image: MIT News

Ever waited entirely too long at your doctor’s office for an appointment to start? The long wait may soon be over: An MIT spinout’s schedule-optimizing software that gets more patients seen more quickly could soon be used by tens of thousands of health care providers across the country, after a recent acquisition by a major health care services company.

Arsenal Health has developed a schedule-optimization service for health care providers that began as a pitch at MIT Hacking Medicine, a hackathon that aims to solve problems in health care. The service analyzes scheduling and other data to predict which patients might not show up to appointments. Health-care providers can then double-book over those potential no-show patients or prioritize their outreach as needed.

Double-booking is often a necessary evil for health-care providers who see high volumes of patients. Inevitably, some of those patients cancel too late or don’t show to appointments, which is costly and a time-waster. Front-end staff can get ahead of this by double-booking, allowing them to move patients around to make up for the no-shows and enabling more patients to be seen overall. But if both parties show up for a single appointment slot, one person waits longer.

Arsenal Health’s service, on the other hand, is a type of “targeted double-booking” that can predict that one patient won’t show, much more accurately than when administrative staff double-book manually, says co-founder and former CEO Chris Moses ’10, now director of product innovation at athenahealth. “This means improved patient access and availability, and improved provider productivity by making their scheduling more open,” he says.

Arsenal Health was acquired in April by athenahealth, which provides cloud-based, network-enabled services and apps for more than 78,000 health-care providers nationwide. Currently, more than 800 of those providers use Arsenal Health’s technology.

Arsenal Health’s solution gathers and analyzes clinical, administrative, and scheduling data to find trends of when and why patients cancel. (Such factors as potential sickness or bad weather, for instance, may be out of a patient’s control.) Using that information, the software uses predictive modeling that determines if a certain patient will or won’t show on a particular day and time.

When front-desk staff are searching for open appointments in athenahealth, the scheduling tool flags the patients that might not show, so they can double-book those slots, called “smart open slots.” It also lists potential no-shows in a call list in a web app so that front-desk staff can reach out to those targeted patients, which has been shown to decrease no-show rates, Moses says.

According to Moses, manually double-booking patients without Arsenal Health is about 20 to 30 percent accurate, meaning both patients show up to an appointment about 70 to 80 percent of the time. The Arsenal Health solution, however, is about 75 percent accurate, with both patients showing up only about a quarter of the time, which cuts waiting time and improves patient satisfaction, Moses says.

In some cases, Arsenal Health’s service has also increased the number of new patients seen by providers, Moses says. On average, he says, a provider using Arsenal Health’s schedule optimization gains a couple more patients each month, and some have gained an additional 30 or 40 patients each month. “That’s important for medical groups and primary-care practices that work in these hospital systems, because new patients equals more revenue for the hospitals, while you’re improving patient experience,” Moses says.

By decreasing no-show rates and increasing new patient numbers, the software has boosted revenue of participating providers by roughly $700 per month, according to Arsenal Health. “So it’s a win-win-win on all sides,” Moses says.

Two years after graduating MIT, Moses attended the 2012 MIT Hacking Medicine event, which was co-organized by a friend. During the weekend-long hackathon, MIT postdoc Gabriel Belfort pitched the no-show problem that his wife, a pediatrician, often complained about. “I thought that was one of biggest problems, one of the realest needs I heard that weekend,” Moses says.

Moses and Belfort joined up with another physician, Donald Misquitta, who was also a data scientist, and MIT PhD engineering student Andrea Ippolito, a Hacking Medicine co-founder. They formed a team dedicated to developing commercial software to solve the no-show problem, with Moses becoming the founding full-time employee.

That summer, the four-person team was accepted into the Founders’ Skills Accelerator at the Martin Trust Center for MIT Entrepreneurship, “which was an amazing opportunity,” Moses says. Among other things, the program provided a “board” of directors, made up of seasoned entrepreneurs, whom the team submitted milestones to on a monthly basis. “The board would say, ‘We’re not giving you $20,000 upfront. You have to earn it,’” Moses says. “That was a really cool structure that helped create accountability really early on.”

In the summer of 2012, the team entered the Healthbox startup accelerator in Boston, where they partnered with Steward Health Care, a major hospital system in Massachusetts. As luck would have it, Steward was an athenahealth enterprise customer, and agreed to work with Arsenal Health and make their data available for training the initial predictive models. “It was a match made in heaven,” Moses says.

The team looked through five years’ worth of scheduling data from 17 offices across several Steward hospitals, and found that of 700,000 appointments, there were 30,000 no-shows — which confirmed there was a real problem, Moses says. Using athenahealth’s data, they built their first prototype that predicted future no-shows at Steward pilot hospitals. After that, Steward became Arsenal’s first paying customer. “When their paycheck hit the bank, we became immediately profitable given our small team size,” Moses says.

In 2014, athenahealth launched its “More Disruption Please” accelerator program, recruiting Arsenal Health as its first investment — which ultimately led to a strong partnership and the acquisition in April. Now Moses is working with a team to implement the scheduling service across athenahealth’s entire network. “The growth opportunity is amazing,” Moses says. “That’s something we could never do as an independent company.”