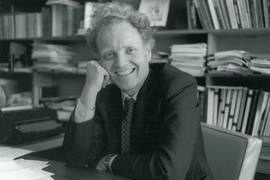 The influential MIT economist and public intellectual Lester Thurow, whose work addressed the many consequences of an increasingly global economy, died on Friday at his home in Westport, Massachusetts. Thurow, who also served as dean of the MIT Sloan School of Management, was 77 years old.

Having focused on income distribution early in his scholarly career, Thurow broadened his interests over time and became a leading public voice examining many of the defining features of globalization, including the competitiveness of national economies at a time of industrial change, and the welfare of workers, including those affected by the shift of jobs around the world.

In many years of engagement with the public and government officials — and in a series of bestselling books — Thurow advocated a distinctive set of policy ideas that defied simple political labeling. He supported policies that would help society and corporations make long-term investments in research in order to spur growth. At the same time, in his writings and public lectures, he also emphasized the importance of education for all, contending that it would help workers in a rapidly evolving and technologizing world.

The connecting thread in all of Thurow’s work, by his own account, was a straightforward and idealistic impulse: He wanted “to make the world better,” as he told Fortune magazine in 1987, soon after assuming the Sloan deanship.

"Lester Thurow spent his life trying to make society more farsighted and more fair,” said MIT President L. Rafael Reif. “As a member of the faculty, as dean of MIT Sloan, as a successful author, and as an advisor to political giants, he embodied MIT’s mission to advance knowledge and educate students in service to the nation and the world. He left an indelible mark in the world of economic policy, and his pioneering instinct for building connections with people, institutions, and ideas around the world is woven deep into the daily life of MIT.”

Into the public sphere

Thurow was born in Livingston, Montana, in 1938, and grew up in the state, where his father was a Methodist minister. Thurow worked in the local copper mines for four summers as a young man, but as an excellent student soon found himself on a fast academic track. He received his BA in political economy from Williams College, won a Rhodes Scholarship, and earned a master’s in philosophy, politics, and economics (PPE) from Balliol College of Oxford University.

After Oxford, he received his PhD in economics from Harvard University in 1964, where he subsequently started his teaching career. Thurow moved to MIT in 1968 and remained at the Institute thereafter, with appointments in both the Department of Economics and in Sloan.

Highly active as both an administrator and faculty member, Thurow served as dean of the MIT Sloan School of Management from 1987 to 1993; he also held a chaired faculty position as the Jerome and Dorothy Lemelson Professor of Management and Economics Emeritus.

Thurow’s work was marked by a career-long commitment to public engagement. In addition to writing his widely read books, he advised presidential candidates and maintained a decades-long dialogue with policymakers.

By Thurow’s account, his interest in bringing economics to the public sphere was intensified in the 1970s, when he failed to land a position in the Carter Administration and chose to influence economic discussion through other avenues.

“I decided that if I could not have the king’s ear, I would talk to the public,” Thurow told The New York Times in 1997. “That’s the other way to have an impact on the economic system.”

Thurow’s books for general audiences in the 1990s are among his most widely read. These include “Head to Head: The Coming Economic Battle Among Japan, Europe, and America” (1992), which surveyed the post-Cold War economic landscape and suggested that investment and education would be keys to renewing developed economies; “The Future of Capitalism: How Today’s Economic Forces Shape Tomorrow’s World” (1996); and “Building Wealth: The New Rules for Individuals, Companies, and Nations in a Knowledge-Based Economy.”

Over time, Thurow maintained the view that a series of sensible policy decisions could produce a globalized economy that would be fairer to all parties, from management to employees.

“There is no silver bullet, but there are many things that we can do to make globalization more inclusive than it would be if we just sat back and let it happen,” Thurow told CIO magazine in a 2003 interview.

In concert with his view that the U.S. could help shape globalization in productive ways, Thurow worked vigorously over an extended period of time to help forge MIT’s relationships with the wider world. In particular, he helped develop MIT Sloan’s programs in China.

“Lester did not simply serve the School and the Institute, nor did he simply serve the field of economics; he was a visionary with the foresight to develop long-lasting and deeply meaningful relationships that united Chinese educational institutions together with MIT Sloan as the barriers between East and West began to crumble,” said David Schmittlein, John C Head III Dean of the MIT Sloan School of Management, in a statement released to the Sloan community.

“In partnership with our faculty and alumni,” Schmittlein added, “Lester made major progress in the development of Sloan’s international presence, and in particular the MIT-China Management Education Project.”

Thurow is survived by his wife, Anni; his brother, Chuck; his sons, Torben and Ethan, and daughters-in-law, Kornelia and Ina; his step-children, Yaron and Yael; and his seven grandchildren.

Plans for a celebration of Lester’s life are forthcoming.

Former Sloan School of Management Dean Lester Thurow has died at age 77, the Associated Press reports. “Thurow became a leading public voice in examining the defining features of globalization, including the competitiveness of national economies at a time of industrial change, and worker welfare.”

Prof. Emeritus Lester Thurow, a former dean of MIT Sloan who was known for his research on income inequality, died on March 25, reports Bryan Marquard for The Boston Globe. Marquard notes that Thurow “addressed topics that resonate as loudly in today’s political debates as they did when he was a professor and dean.”

Scott Malone of Reuters writes that Prof. Lester Thurow, a former dean of MIT Sloan, has died at age 77. Malone writes that Thurow’s, “policy recommendations focused on promoting education and long-term investment in companies and economies.”

New York Times reporter John Koblin highlights the work of Prof. Lester Thurow, a former dean of MIT Sloan and a prominent economist, who died on March 25. “He was one of the first important economists to suggest that too much inequality is bad for society,” said Jared Bernstein, of the Center on Budget and Policy Priorities.