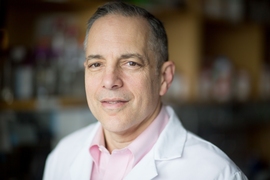 MIT is one of the institutions that will share the One Brave Idea Research Award to pursue new biomarkers for atherosclerosis — the hardening of the arteries that kills about 500,000 people in the United States every year.

At the core of the proposal is a collaboration between the Brigham and Women’s Hospital and MIT. The research team will be led by Calum MacRae, chief of cardiovascular medicine at Brigham and Women’s Hospital, and the MIT effort will be led by Elazer R. Edelman, the Thomas D. and Virginia W. Cabot Professor of Health Sciences and Technology in MIT’s Institute for Medical Engineering and Science. Edelman also directs the Harvard-MIT Biomedical Engineering Center and the MIT Clinical Research Center.

Together with researchers from Stanford University, Northeastern University, and others, the scientists will seek new ways to identify patients at risk before they suffer heart attacks or strokes. These biomarkers could be based on genetic variations, molecules found in the bloodstream, or behavioral features such as gait or speech.

“The focus previously has been on people in the tail end of their life, when they have already suffered a stroke or a heart attack. But by then, the ravages of the disease are already profound,” Edelman says. “So the question is, can we use modern biology and modern technology to protect people at risk of developing disease well before their presentation is catastrophic?”

Edelman, a cardiologist and bioengineer, helped to develop generations of cardiovascular devices like endovascular stents — metal-mesh tubes that can be inserted into diseased arteries to prevent them from collapsing. Later versions of the stents were designed to release drugs that prevent cells from clogging up the stents, which are now given to millions of patients every year.

The One Brave Idea team plans to begin by studying families with exceptionally high risk for coronary heart disease, gathering data from a number of sources: lifestyle data such as sleep, activity, and stress, as monitored by wearable technologies; environmental and economic data; and crowdsourced opinions of patients and families. The project will also draw on large populations of study subjects from the Framingham Heart Study and the Million Veteran Program.

Based on the new markers they identify, the researchers also hope to develop new treatments for heart disease. One of MIT’s major roles will be to help in designing therapeutic devices based on the new discoveries and optimizing their intended use in mock clinical settings, Edelman says.

“We can leverage our ability to build prototype devices and idealized application environments to ensure much greater likelihood of clinical success,” he says.

The project also includes researchers from the University of Toronto and the Boston University School of Medicine, as well the life sciences venture capital firm Atlas Venture.

STAT reporter Sharon Begley writes that MIT will share the One Brave Idea research award, which is focused on supporting research aimed at fighting heart disease. The award recipients plan “to hunt down so-far unrecognized signals marking the transition from a healthy heart to one on the road to disease.”

Putting up a struggle against cancer