Two miles thick and a continent wide, piles of snow have been accumulating across the world’s polar regions over millennia. After cycles of melting and freezing, compressing and spreading under their own weight, packed snow formed magnificent glaciers. These majestic, yet powerful, bodies of ice sculpt the land beneath them as they move, responding to the Earth’s climatic changes. As they do so, a new ice sheet layer freezes on top, capturing a snapshot of the current climate and building on the ice record below.

For many, this is enough to inspire awe, but for glaciologists, much more lies beneath the surface.

“I can tell you, I’ve spent a lot of time looking at ice, and I don’t regret it. It is a fascinating undertaking,” said Richard Alley, the Evan Pugh University Professor of Geosciences in Pennsylvania State University’s College of Earth and Mineral Sciences, and this year’s John Carlson lecturer. 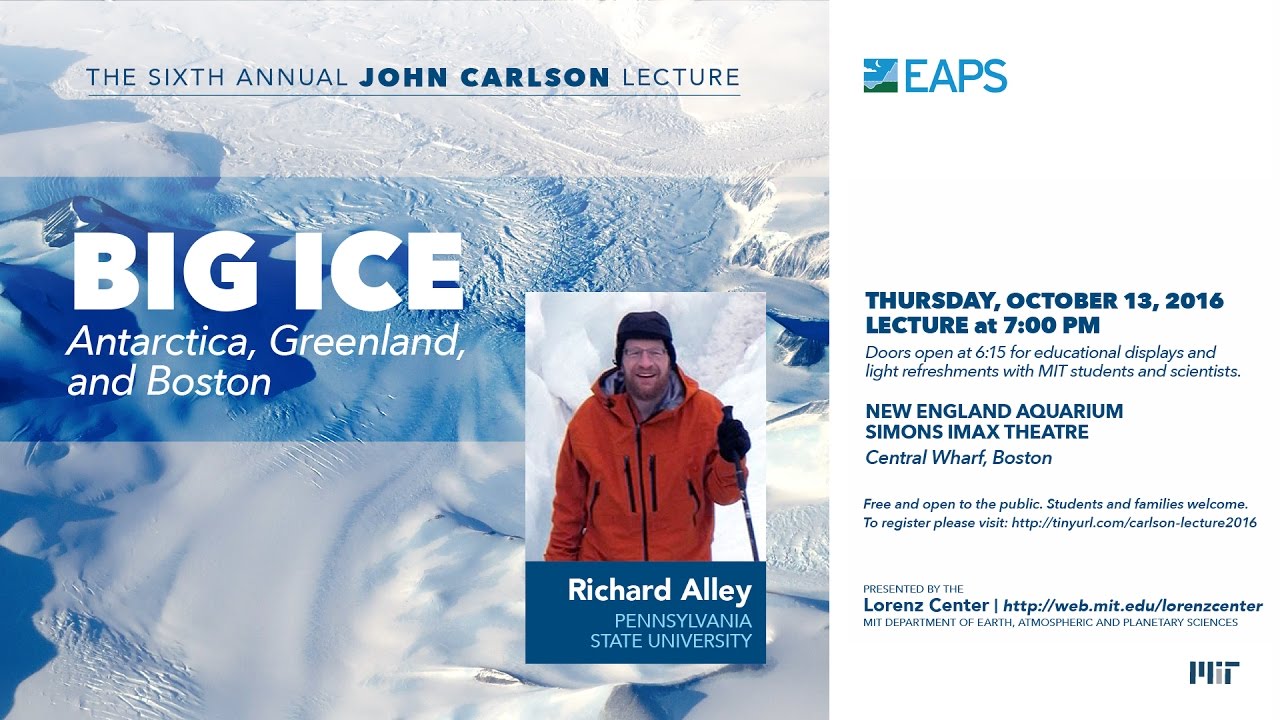 “Richard is the world’s foremost expert on the relationship between ice and climate — what ice has to tell us about past climates, the role that ice has played in climate change, and the relationship between continental ice and sea level,” said Kerry Emanuel — the Cecil and Ida Green Professor of Atmospheric Science and co-founder of MIT’s Lorenz Center — as he introduced Alley. The John Carlson Lecture, presented by the Lorenz Center, communicates exciting climate science to a broad audience. Alley’s exemplary efforts in this endeavor and his long list of accolades were some of the reasons he was invited to speak at the 6th annual Carlson lecture. Kerry continued, “[Alley] is also the most energetic and entertaining public lecturer I personally know — living proof that fire and ice somehow go together.” And for attendees of the lecture, Alley’s dynamic nature certainly brought the cryosphere to life.

About 24,000 years ago during the last glacial maximum, ice sheets reached their greatest extent. Stretching down from Canada, glaciers brought soils to Lake Michigan and Erie, and the lobe of Massachusetts’ Cape Cod — a virtual backyard for Boston residents. But around 18,000 years ago, the ice began melting across Europe and North America and receding toward the poles. The climate had changed, Alley explained succinctly, “and you live in the footprint of a great ice sheet and it was a fascinating footprint.”

But it was cause of this climate warming and its physical manifestation on glaciers that piqued Alley’s interest; to learn more, Alley and his fellow scientists drilled down into Greenland’s ancient ice.

Like tree rings, ice cores tell a complicated story of the world’s climate, which Alley has been working to untangle. In the 1990s, extracting a core measuring 2 miles deep into Greenland’s ice sheet allowed Alley’s group to visualize and access a record of the climate there. Alternating layers of thick and thin ice read as winter and summer seasons, respectively, and trapped air bubbles and dust in each layer captured a freeze frame of climatic conditions at that moment in time.

“We can fingerprint the dust,” Alley said, directing the audience’s attention to image of the core and what its contents could reveal about the changing climate. “In that is sea salt, a little bit of pollen, forest fire smoke, micrometeorites falling down from space, odd isotopes that are made by cosmic rays breaking things in the air. Anything that’s blowing through the air falls on the ice sheet.” The team also analyzed chemical signatures from the air bubbles, which shed more light on Greenland’s atmospheric composition throughout its history, and a temperature probe dropped into the middle of the glacier showed that it still had not yet warmed up from the last ice age.

Using these clues and similar ones from around the world, scientists constructed a record of the world’s temperature that goes back 440,000 years to try to figure out why the climate changed so dramatically. They found that every temperature record on the planet had a similar ice age cycle, moving through periods of warm and cold with shorter episodes running on the back of them. “It doesn’t look like a random generator made it. It looks like a clock made it,” Alley said pointing out the peaks and troughs in the plot. “You could see it going sort of tick, tick, tick, tick.”

The reason for this, Alley continued, can be explained by looking at the ice cores. They showed that while there is some evidence that volcanic eruptions; weather and ocean circulation changes; and natural fluctuations in the Earth’s orbit and sun exposure can affect the climate, the climate largely ignores it. But when ice grows in Canada and the Arctic, the world responds by getting colder, even in places that are receiving more sun, thanks to the Earth’s tilt.

This, Alley emphasized, is a story about CO2 — carbon dioxide. “If you ignore the CO2, no one has ever explained why half of the world ignores its sun and listens to Canada’s ice. If you include the CO2, it all makes sense. Alley and his colleagues discovered that ice growth in Canada causes sea levels to fall 100 meters, and ocean currents, dust and winds to change, which sequesters some of the greenhouse gas into the deep ocean. The reversal of this process moves CO2 out of the ocean and back into the atmosphere, heating up the Earth. Leading Alley to conclude that, “Greenhouse gases really do matter, and we can’t make sense of climate history without them.”

Alley wrapped up the evening’s lecture with an entertaining lesson on the physics of glaciers and a song of caution about the consequences of Antarctic and Greenland ice-sheet melting. Using a pancake and waffle analogy, Alley demonstrated how batter poured on a hot griddle behaves similarly to glaciers, spreading under its own weight. Waffle irons and carefully placed spatulas impeded the batter’s flow, acting as Greenland’s bumpy terrain and flying buttresses that allow the snow and ice to amass. But, as Alley sang in G major, the Earth has been enjoying a relatively temperate climate during the time of humans, but increasing CO2 and melting glaciers could bring that to an end in the foreseeable future.

Before the Carlson Lecture began, researchers in MIT's Department of Earth, Atmospheric and Planetary Sciences (EAPS) gathered in the New England Aquarium’s Omni Theater foyer to share their research with the attendees. McGee Lab graduate students Chrstine Chen, Kaylee Brent, and Maya Stokes demonstrated how they reconstruct how precipitation and wind patterns responded to past climate changes as a way to improve our understanding of how rainfall might change in the future. Assisted by microscopes and a sample of Charles River water, Professor Mick Follows, postdoc Jonathan Lauderdale, and researcher David Talmy revealed a complex marine ecosystem — one of the many that they are trying to model with MIT’s Darwin Project. Professor Glenn Flierl and physics graduate student Keaton Burns showed how all the Earth, atmosphere, oceans, and climate components come together using the iGlobe, a real-time depiction of Earth processes.

A private dinner for EAPS donors and friends followed the lecture. During the evening, 2016 EAPS fellows met and thanked their benefactors. Mukund Gupta, a second-year graduate student in the Marshall group, spoke with John Carlson, whose generous gift to the Lorenz Center in EAPS also makes this yearly lecture possible. Likewise, first-year graduate students and this year’s Norman C. Rasmussen Climate Fellows Raphael Rousseau-Rizzi, Ziwei Li, and Tristan Abbott shared their appreciation with their supporter Neil Rasmussen, who is also an MIT Corporation member and EAPS Visiting Committee member. On behalf of the Lorenz Center, Kerry Emanuel and Dan Rothman thanked everyone for attending and for their support, and presented John Carlson with an autographed copy of Richard Alley’s book: “Earth: the Operator’s Manual”.

The John Carlson Lecture communicates exciting new results in climate science to the general public. Free of charge and open to the general public, the lecture is made possible by a generous gift from MIT alumnus John H. Carlson to the Lorenz Center in the MIT Department of Earth, Atmospheric and Planetary Sciences.