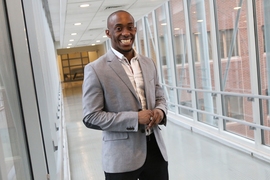 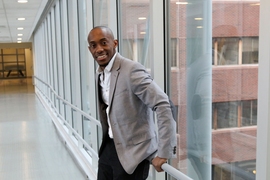 When MIT senior Sheldon Trotman walks into any room, he almost instinctively looks for inefficiencies. The electrical engineering and computer science major is bent on streamlining our world, and has already founded several small companies that aim to do so.

Even while meeting at a small coffee shop, he is quick to point out a simple fix to a problem that the shop’s proprietors may not even know they have: Many restaurants and workplaces with shift-based scheduling rely on clunky spreadsheets, email lists, or phone calls to coordinate employees who pick up and drop shifts at the last minute. Trotman has designed an app that would let workers do all of this remotely.

“You could go on your phone and say, ‘Hey, I don’t want to work today,’ and it gets sent out to all your co-workers and your manager, instead of having to pick up the phone and call everyone individually, or clogging up their email inbox,” Trotman says. “I just see inefficiencies everywhere, and I want to fix them.”

Looking for a connection

Trotman grew up primarily in Maryland, and attended a magnet middle school that focused on math and science, providing him with resources in computer science. But his initial interest in technology really stemmed from his efforts to fit in.

“I did track, football, and chess, which was a pretty strange combination in a cliquey public school,” Trotman says. “I was also the only person of color [in that middle school program], and that can be isolating.”

Looking for a way to connect, at an early age he became hooked on teaching himself the basics of artificial intelligence, so that he could someday create something that could communicate back and forth.

At MIT, Trotman’s first research experience was in the Humans and Automation Laboratory, where he assisted in simulating human interactions with autonomous vehicles. His work supported the research of then-associate professor of aeronautics and astronautics Missy Cummings and graduate student Jason Ryan.

Getting down to business

But Trotman realized early on that having big ideas is nothing without understanding the business behind making them work. As a sophomore, he enrolled in classes at the MIT Sloan School of Management, where many of his classmates had the opposite problem: “A lot of people there have really great ideas, but less technical talent,” he says.

This realization led to Trotman’s first small business, Gogeshe, which was essentially a small team of technology consultants who worked on design, development, and marketing. Clients could come in with a business model for an undeveloped product, and Trotman’s group would flesh out the idea into a full-scale design and prototype. Clients could then either keep the Gogeshe team on to ultimately develop the product, or buy out the design and take it elsewhere for development.

Trotman’s mind is restless, though, and almost as soon as Gogeshe was off the ground, he was already focusing on a new idea: making use of latent processing power in mobile phones. At the end of a summer internship at Intel Corp., he won a hackathon with this idea, which was only 24 hours old at that point. Trotman realized that with more than 24 hours, there could be immense potential in fleshing out the project into another small business.

Along with partner Alex Koren, an undergraduate at Johns Hopkins University, Trotman spent a year contacting investors, entering competitions, and developing Hyv, a company that facilitates the borrowing of unused processing power from phones, and lending it to companies that need extra power.

“It’s sort of philanthropic,” Trotman says. “While you’re playing Angry Birds, you could have a tiny slice of data analytics running in the background of your phone, potentially helping someone do their cancer research, for example.”

Unfortunately, technological limits made the idea hard to scale: Phones are susceptible to slow networks and WiFi connections, which made it hard for Hyv to compete with running the same type of business through computers. For now, Hyv is on the back burner — but Trotman is confident that once phone technology gets faster, his business will have a place.

In the near future, however, he plans to stick with his interest in eliminating inefficiencies: After graduating from MIT this June, Trotman will begin a job at Bloomberg, the New York software, data, and media company, where he will work to streamline the process of investing.