Undaunted by the unknown 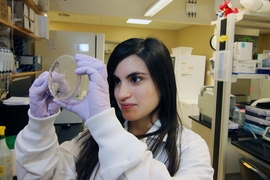 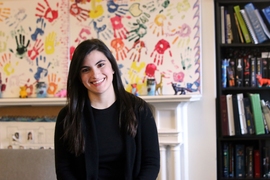 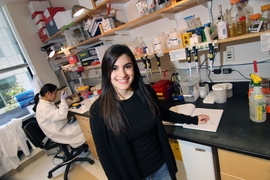 MIT senior Katie Bodner thrives in fields that are full of unanswered questions: She arrived at the Institute with little research experience, and from a family with no scientists, but now a biological engineering major, she has found her place working on projects in synthetic biology, biological-based pharmaceuticals, and programmable vaccines.

Bodner was initially intent on pursuing chemical engineering. But after completing course 7.012 (Introductory Biology) — taught by Eric Lander, the MIT professor of biology who also leads the Broad Institute — she recognized that her interests aligned more with engineering cells than chemicals.

Her first exposure to synthetic biology came soon after, through MIT’s International Genetically Engineered Machine (iGEM) team, part of a global competition. As a second-semester freshman on the team, she took the lead in developing a cell that could detect and kill other cells that are cancerous.

Synthetic biology has two arms: engineering new functionality into existing organisms — where Bodner’s work fell — and engineering organisms from scratch. Her iGEM project touched on bringing the power of DNA computing to living cells to enable cells to perform digital logic functions, much like a computer.

While the project began in February of her freshman year, by eight months later, as the competition neared, she still hadn’t conquered the reaction that was central to the entire project: In a living cell, Bodner was trying to recreate what’s known as a strand displacement reaction, which had at that point only been proven to work in a test tube. A successful reaction requires implanting RNA into cells, but in Bodner’s work, the cells were recognizing the foreign nucleic acid and destroying it before it had a chance to do its job. A mere three days before the competition, she finally figured out the proper conditions to allow the RNA to work inside the cell incognito.

“When I got it to work, I realized I was the only person in the world to be experiencing that moment, and that really made me fall in love with discovery and research,” Bodner says. “I could see myself pursuing a career in research just to feel that moment again.”

Her work on this team of 13 students pushed Bodner to create a course in synthetic biology for other MIT students who had little practical experience but plenty of intellectual curiosity. She designed, recruited students for, and taught the course during the January Independent Activities Period of her sophomore year, and again the next year, teaching 15 students basic biology lab skills such as cloning DNA and designing DNA plasmids.

“I’ve found that I really love giving advice, and sharing my experiences and the lessons that I’ve learned,” Bodner says. “A great way to do that is by teaching.”

This past summer, after winning the U.S. Biologics Technical Development Outstanding Student Award, Bodner completed a 10-week internship at the biotech firm Genentech in San Francisco, where she helped optimize a drug for macular degeneration and had to present her research to the company’s entire cell culture department. At Genentech, she worked with a class of drugs called biologics, which use cell matter to deliver treatment, like vaccines and allergy shots, rather than chemical matter.

At Genentech, Bodner worked to overcome a tricky balancing act with biologics: increasing how much drug cells produce without also increasing toxic byproducts, all while keeping the number of cells stable. The experience was Bodner’s first time seeing firsthand how research can yield products used by real people.

Bodner’s current research position at MIT is with Ron Weiss, a professor of computer science and biological engineering who was also her faculty advisor for iGEM. The recipient of an Amgen-UROP Scholarship for independent research, she is now combining her experiences in programming cells and working with disease to create a programmable vaccine for HIV/AIDS under the mentorship of postdoc Tasuku Kitada.

The virus poses a unique challenge to researchers in that it has so many different variants, and trying to give a patient a vaccine for all of the variants at the same time is too much for the immune system to handle. Bodner’s project, which she has been working on since the summer before her junior year, aims to create a shot that is only given once, and then activated by a pill to deliver additional vaccines, like a time-release shot.

Bodner sees potential for this type of technology in rural parts of the developing world, where infected individuals don’t have easy access to clinics and doctors. Being able to receive an injectable shot only once, and then activating booster vaccines through pills taken at home could make vaccination more accessible.

Throughout her research experiences, Bodner has been energized by the challenges of delving into fields like synthetic biology, which have few rules and guidelines as of yet. It’s a characteristic of the type of research she hopes to continue with in her career.

“I’m attracted to how there’s this really broad range with what you can do with [cutting-edge science],” she says. “It’s so new that there’s enough left unexplored in the field, and I feel like I can make an impact.”