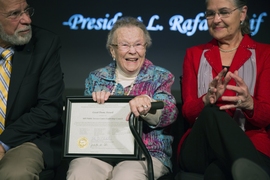 The MIT Public Service Center (PSC) has been renamed in honor of Priscilla King Gray, one of the center’s co-founders and the wife of former MIT President Paul Gray.

The PSC — founded in 1988 and now known as the Priscilla King Gray Public Service Center — promotes service to the MIT community, the Boston area, and the world by providing grants, advice, and logistical support.

A surprise announcement of the renaming was made in a letter from President L. Rafael Reif that was read at an Alumni Leadership Conference dinner on Saturday evening, with the Grays in attendance. Unaware of the renaming, the couple had come to accept the Alumni Association’s Great Dome Award on behalf of the PSC Leadership Council.

“As a vehicle for connecting our students with the communities that surround them, the PSC reflects the very best of MIT,” Reif said in his letter. “That future generations of MIT students will forever associate the name Priscilla King Gray with service, compassion, and humanity makes me extremely proud. The center’s new name is a tribute to your decades of loving dedication to the students of MIT, and it will be an inspiration to generations more.”

Priscilla Gray co-founded the PSC with then-dean of student affairs Shirley McBay and Robert Mann, a mechanical engineering professor; she has since remained an advocate for its work. Gray has continued to be well-known at MIT for her legacy of service and volunteerism, inspiring students and faculty to give back to their community.

Alison Hynd, the PSC’s interim co-director, says, “Priscilla was instrumental in getting the Public Service Center established, but even more important, she has been a strong advocate for MIT students every step along the way.”

“Priscilla is a trusted advisor to our staff and an inspiration for the MIT community,” adds Natalie Britton, the other interim co-director of PSC. “We are honored to be named after Priscilla and believe that it will help keep MIT’s mission to work for the betterment of humankind at the center of MIT student life.”

Paul Gray ’54, SM ’55, ScD ’60, who served as MIT’s president from 1980 to 1990, has said that his wife’s interest in volunteering began with the example of her mother, who was involved in various causes in schools and the community. “It comes in the genes, and in the upbringing as well,” he said in 2013.

When Priscilla Gray became part of the MIT community following the couple’s marriage, she took this idea of service to a whole new level, Paul Gray said. She was involved in many causes, both at MIT and around the Boston community, rarely missing a Wednesday volunteering at Children’s Hospital even while raising four children.

“It has been a privilege for me to be part of the MIT Public Service Center and to watch the MIT students take part in all the various kinds of public service imaginable here in our own country and around the globe,” Priscilla Gray told MIT News in 2013. “Their enthusiasm and energy are inspiring and their intelligence and creative abilities are a gift to all they help.”

Among other ongoing programs, the PSC provides fellowships to help students work on projects locally and around the world. It also runs the IDEAS Global Challenge, where students form teams to create innovative projects to improve life in communities around the world; CityDays, which provides opportunities to serve the local community during several days each year; ReachOut, a semester-long tutoring program; and LEAP Grants, to help students develop their own service or philanthropic projects.

Over the years, the PSC has enrolled thousands of students in its programs, and has worked with far more. Among the dozens of initiatives that it has directly supported, many have gone on to become long-term projects, organizations, or companies. A few of these include Open Style Lab, which convenes therapists, engineers, and designers to prototype accessible clothing for clients with disabilities; 6dot, which makes labeling devices for the blind; KEYs, a program aimed at providing science and technology mentors for girls; the Kanchan Arsenic Filter, which has helped to provide safe drinking water to over 100,000 people in Asia; Innovators In Health, which provides tuberculosis treatments in India; and Sanergy, which provides sanitation systems in Kenya.

“As co-founder of the PSC, Priscilla has helped encourage a generation of students to apply their knowledge and passion for helping others for the betterment of humankind,” says Costantino (Chris) Colombo, MIT’s dean for student life. “Naming the PSC in her honor is a fitting tribute to her years of service to MIT, its students, and the world.”

“Priscilla Gray has been a mainstay of the PSC, and its most effective advocate, since its founding,” adds John G. Kassakian, a professor of electrical engineering and longtime PSC advisor. “The PSC has prospered and grown through her dedication, patience, persistence, and encouragement. Her gentle guidance has been of great value to the center’s leadership, and her dogged lobbying on the center’s behalf has made it a priority within the MIT community.”

In his letter announcing the renaming in Gray’s honor, Reif wrote, “Your generosity, your wisdom, and your friendship mean a great deal to me personally — and I know that I am only one of your countless fans. Tonight we celebrate the impact you have had on the lives of thousands of MIT students, faculty, and neighbors, across our campus and well beyond.”