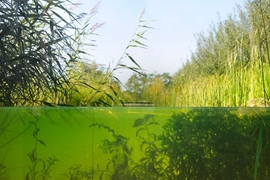 Seagrass, kelp beds, mangroves, and other aquatic vegetation are often considered “ecosystem engineers” for their ability to essentially create their own habitats: Aquatic leaves and reeds slow the flow of water, encouraging sediments to settle nearby to form a foundation on which more plants can grow.

Such underwater forests provide shelter to hundreds of organisms, and can also protect shorelines from erosion. However, in the last few decades, large swaths of aquatic vegetation have disappeared around the world, including 100 million acres of wetlands, and thousands of acres of seagrass and kelp beds, in the United States.

In large part, sediment transport — how sediment flows through a region — determines the survival of coastal marshes and mangroves: Plant growth depends on the accumulation of sediment to the seafloor. When strong storms or currents carry sediment away, underwater forests can also wash away, exposing coastlines and riverbanks to erosion.

Now researchers at MIT have developed a simple model that can help scientists understand how and when sediments move through a region of aquatic vegetation, such as a wetland. The researchers say engineers may use this model to design better ways to restore seagrass, mangroves, and other underwater plant beds. For example, using the model, scientists may be able to identify locations where aquatic vegetation may be less prone to erosion.

“Wetlands are very important because they protect our coastal areas, but they are eroding,” says Qingjun Yang, a graduate student in MIT’s Department of Civil and Environmental Engineering. “With this, engineers can do modeling on how the stresses vary, and whether it would be helpful to plant vegetation here or there, based on the equation.”

Yang and her colleagues —Heidi Nepf, the Donald and Martha Harleman Professor of Civil and Environmental Engineering at MIT, and postdoc Francois Kerger — have published their results in the journal Water Resources Research.

To estimate sediment transport in aquatic environments, one key factor is what’s known as “bed shear stress” — the friction exerted by water at the seabed, which gives scientists an idea of how sediments move across the seafloor. Existing models and equations calculate bed shear stress for underwater environments without vegetation. However, there exist no applicable models for vegetated regions, as plants create more complicated currents and eddies, muddying the picture of sediment transport through such regions.

Yang and her colleagues sought to develop a model of bed shear stress for vegetated environments by first setting up a controlled experiment to simulate sediment transport through a simple, reed-like environment.

In a large, 10-meter recirculating water tank lined with a bottom layer of plastic, the researchers erected thousands of thin dowels to simulate sturdy, marsh-like reeds. They then deposited polymer particles in the water, and ran a pump to circulate water through the tank.

Using a technique called laser Doppler velocimetry, they aimed a pair of lasers into the tank at various depths and positions. The researchers used the lasers’ backscattering, or reflected light, to calculate the particles’ velocity at a particular location. As the particles were very small, their velocity was equal to that of the surrounding water parcels, or groups of water molecules. The researchers then converted velocity measurements into estimates of friction, or stress, between water parcels, and at the bed.

After multiple trials, the researchers observed that the friction exerted by one water parcel on another resembled a linear function with depth: The deeper a water parcel, the more friction it experienced, with the most stress occurring at the bed. This linear relationship is contrast to a well-established theory of bed shear stress, called “the law of the wall” — a theory that has mostly been applied to nonvegetated regions, and that generally assumes that an aquatic environment exerts constant stress near the bed, regardless of depth.

Yang developed an equation for bed shear stress based on the linear stress observed in the group’s experiment. She then used the equation to successfully predict friction at the bed, based on the velocity of water parcels at any location above the bed.

Yang says the model is most relevant for environments with relatively smooth beds and emergent vegetation — long, thin plants, such as reeds, that extend from the seabed to the water surface.

“We can use this model to predict how much energy it takes for sediment to begin to flow, and how fast the flow has to be,” Yang says. “The faster the flow, the more friction is exerted on the bed, and the more the sediment begins to move. Then we know how the land will evolve, and how we can shape and design vegetation and soil so they can live on without much erosion.”

“As anyone can imagine, the presence of plants makes the flow patterns very complicated — we can only approach the problem from a statistical perspective, by modeling relevant statistics of the flow field through the plants,” says Francesco Ballio, a professor of civil engineering at the Polytechnic University of Milan who was not involved in the research. “This model can be already used for calculation of the flow field in vegetated water systems such as rivers and wetlands. … As a consequence, it may be incorporated also as a component of more complex eco-hydrodynamic models for water bodies management and restoration. But this will require some testing.”