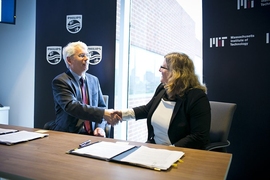 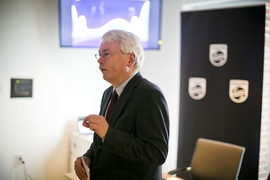 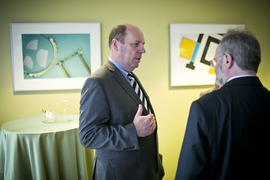 Philips has announced an alliance with MIT, for an initial term of five years and $25 million, that will ultimately support MIT research in the company’s core areas of health care and lighting solutions technology, which will be conducted in collaboration with Philips Research.

The new MIT-Philips alliance was formalized today with a signing ceremony attended by Global Head Henk van Houten of Philips Research, and MIT Provost Martin Schmidt and Associate Provost Karen Gleason. Some of the MIT researchers whose work will be supported by the new alliance also attended the signing.

Philips, whose formal name is Royal Philips N.V., is headquartered in Amsterdam and has 108,000 employees in some 100 nations. Its two main divisions are devoted to health technology, where Philips has pioneered new models for innovating with hospital network partners, and lighting solutions, where Philips has lit some of the most iconic structures in the world, including the Empire State Building.

In addition to today’s agreement, the company’s North American research headquarters will move to the Kendall Square area. The exact location was not announced, but the company has said that it is choosing the new location based on its concentration of startups and research labs — especially in the biomedical area — and for its proximity to MIT and the research projects that will be supported by the MIT-Philips alliance.

“Kendall Square produced more IPOs in biotech last year than all of Silicon Valley, and I am excited that Philips will be further enhancing this innovation ecosystem,” Gleason says. The proximity of the company’s new research headquarters to MIT, she says, “will allow us to address grand challenges together.”

The arrival of Philips, Schmidt adds, will also help to diversify Kendall Square’s industrial mix, which is now heavily weighted toward biotechnology firms.

While Philips has not announced all of the projects that will receive research funding through the MIT-Philips alliance, the company has already met with representatives of several different labs and centers on campus, and has solicited research proposals. The research is expected to focus on areas such as lighting for green buildings and cities; clinical decision support; clinical informatics; interventional guidance, planning, and assessment; and medical ultrasound, photonics, and bioinformatics.

Peter Szolovits, a professor of computer science and engineering and of health science and technology, is one of the researchers receiving funding. He says Philips has expressed interest in working with MIT researchers on improved ultrasound and other noninvasive diagnostics, as well as systems for extracting useful medical information from large databases. This includes many data sources, such as patient records, that may be written in ordinary language.

One significant benefit of the MIT-Philips alliance, Szolovits says, is to help academic research find applications beyond the publication of papers.

“One of the things I’m really looking forward to, since they [Philips] are actually making stuff that gets used in hospitals around the world, is that they will develop some of these ideas,” Szolovits says. “That, in turn, would allow MIT students and faculty to do follow-up studies on ‘how well these things work in the real world.’”

Philips expects that approximately 70 percent of its research funding will be allocated for studies of health diagnostics and imaging, while the other 30 percent will support lighting research.

In the latter area, Alan Berger, a professor of urban design and landscape architecture, says the MIT-Philips alliance will focus, in part, on how to use lighting devices to generate data that can be used to help plan energy usage, from individual homes to entire urban areas. Such efforts could harness the ubiquity of lighting in modern life, making lighting fixtures into data-collection and transmission devices, as well as light sources. For example, lighting could be used to monitor pollution, measure building occupancy, or detect emergency conditions such as fires or flooding.

Lights could also be used to convey information: For example, if flooding is seen in an area, streetlights could change color to direct people to evacuation routes, Berger says. Lights could also monitor traffic, so city planners would know which areas are most heavily used and may need more resources.

“The projects will span the whole Institute,” Berger says. And the resulting products, he says, should find applications globally: “These technologies can be deployed in places that have very little infrastructure.”

MIT has many people “who are really great at data collection and analysis,” Berger says. “The question is what do you do with it.” This new alliance, he adds, should help get the fruits of MIT research into production as “something that can change how we think about the world.”

According to The Boston Herald, “Amsterdam’s Royal Philips N.V and the Massachusetts Institute of Technology have signed a five-year, $25 million research alliance to develop healthtech solutions and digital connected lighting systems.” Philips will also move its North American research headquarters to Cambridge.

Philips is moving its North American research headquarters to Kendall Square and has announced a $25 million research alliance with MIT, reports Boston Globe correspondent Karen Weintraub. MIT and Philips have a “resonance on specific technical issues, but also on the approach to innovation,” says Associate Provost Karen Gleason.

Gus Iverson writes for DOTmed about the new alliance between MIT and Philips aimed at spurring innovation in health care and lighting solutions technology. Philips will also be relocating its research hub to Kendall Square, which Henk van Houten, executive vice president and general manager of Philips Research, called "a thriving innovation ecosystem."

MedTech Boston reporter Jenni Whalen writes that Philips has formed an alliance with MIT and plans to move its North American research headquarters to Cambridge. “By moving to Cambridge and collaborating with MIT, its staff and its partners, Philips can work with some of the best minds in the world,” explains Henk van Houten, executive vice president and general manager of Philips Research.

Stacey Higginbotham of Fortune writes about a new $25 million partnership between Philips and MIT in which the company will move its North American R&D headquarters to Cambridge: “Given that Philips will focus on lighting and healthcare technology for its R&D, Boston makes a considerable amount of sense, especially on the health side.”