Leading the club is Master Dan Chuang, who started teaching Sport Taekwondo at MIT in 2000 as a physical education class. That same year he founded the Sport Taekwondo Club on campus: “I was a collegiate athlete myself, and wanted to communicate my passion both for collegiate sports and taekwondo,” Chuang says.

Over the last 15 years many of the successful athletes got their start due to the MIT PE course.

“I took the PE class in the fall,” says sophomore Nina Anwar. “I had never done any martial arts before, but I knew I wanted to try it out.” After claiming that she was “never really the athletic type,” Anwar found that through dedicated practice in the club she quickly excelled in her new niche, earning a gold medal at this year's national championship after only starting taekwondo in the fall.

The culture created by peers and Chuang play a major role in the success of the student-athletes. “They were all so friendly and encouraging and always willing to help me improve,” Anwar notes. “I love Master Chuang’s enthusiasm. It gives me energy through practices, even when I start off tired from classes and schoolwork.”

Sophomore Mitchell Hwang began taekwondo this year for a consistent extra-curricular activity. “Having Master Chuang as my instructor has reinforced my decision to continue taekwondo.” Hwang benefited from Chuang’s investment in teaching the lower belts, capturing a gold medal this year at the national championships. 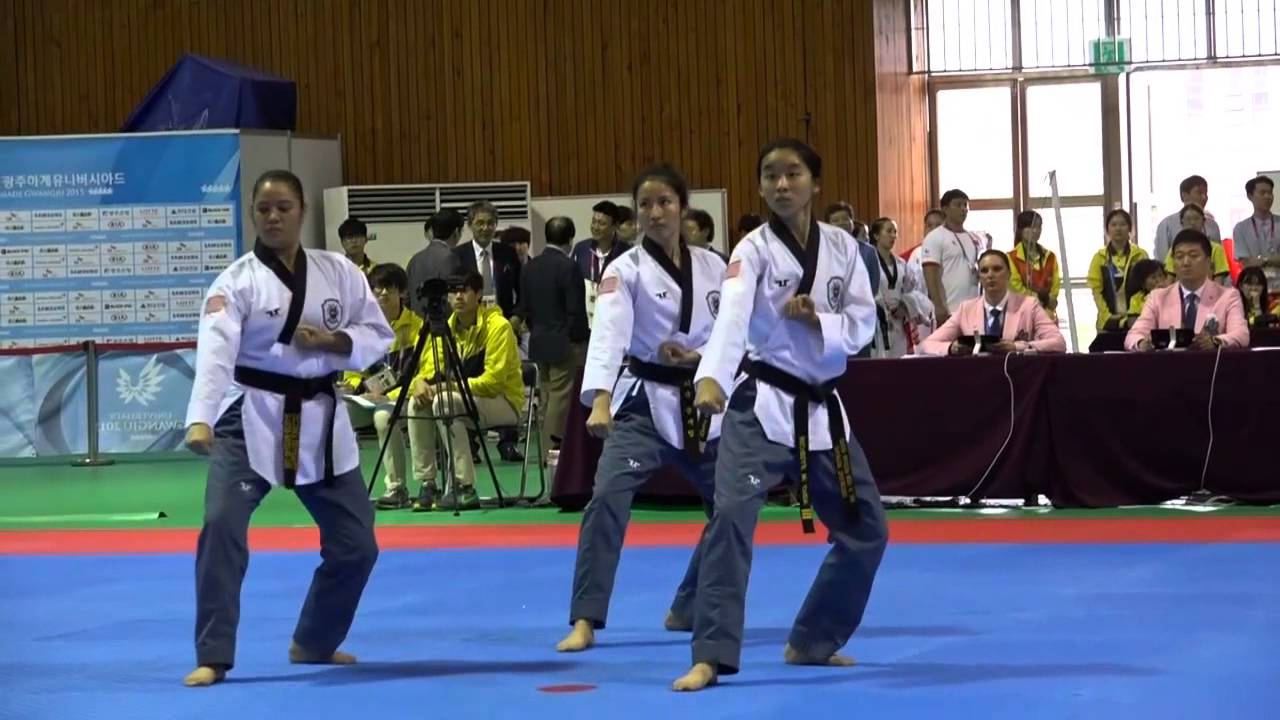 Though Michelle Chen ’14 MEng ’15 — nicknamed “Machine” — came to MIT with prior experience, she still benefitted from the instruction in the PE course before connecting with the club. After collecting two gold medals and one silver last year as a club member, Chen traveled with Chuang in July to Gwangju, Korea, for the 2015 Summer World University Games. She and her teammates, seen in the video above, advanced to the final round, finishing 7th overall.

The love and devotion of these students is so great that as they master the sport, they elect to volunteer assistance to Chuang in the PE class. “The confidence they gain from the considerable skills they have learned gives them opportunities to practice leading their fellow students and teaching them in small groups,” Chuang says.

Like [teaching assistants], a lot of the upper belts are willing to dedicate numerous hours to helping students,” Chen says. “People love each other because we have sweat and struggled together.”

“One of the things Master Chuang has been saying throughout the year is that the lessons you learn from taekwondo don’t just apply to the sport — they can be applied to whatever you do,” Anwar says. Added Hwang: “The biggest lesson I have learned from taekwondo are that one should never give up, and that with a team you’re never alone.”

Referencing a note on the importance of adding “heart” to MIT's motto of “mind and hand” by 2015 Commencement speaker Megan Smith, Chen described that the club members “like all the other students, believe in 'mens et manus,' with heart thrown in there. We struggle together to use our mind and hands during the sport itself, but it is with the heart that we stay together and work hard.”

From drinking from the firehose to playing in the pool