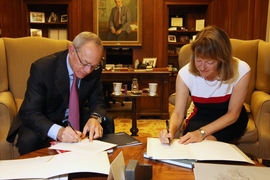 MIT and Imperial College London committed this week to a new joint research fund that will support early-stage research and deepen the long-standing collaboration between the two universities.

“So many of the breakthroughs that the MIT and Imperial faculty have enjoyed can be traced directly to our institutions’ shared commitment to basic research,” Reif says. “It is critical that we continue to find ways to support research interests whose payoff might be significant, but only over time. We are delighted to collaborate with our colleagues at Imperial to create new opportunities for exploration.”

“The world turns to MIT and Imperial to solve a broad range of societal problems,” Gast says. “Amid the immediacy of these increasing external expectations, both universities need to find ways to support fundamental research where the results are less immediate and the impacts promising but less certain. This program is an important and creative way to ensure that truly novel ideas can be pursued. I am excited by its potential.”

The two institutions have together invested an initial $300,000, to be distributed in grants of $30,000 to $50,000 for 18-month project periods. The money will cover travel costs and other early-stage overhead for prototypes and small-scale experiments. Applications are now open for the first round of funding, due Jan. 15, 2016.

An initiative of the MIT Office of the Provost and Imperial College London, the MIT-Imperial seed fund is administered by MIT International Science and Technology Initiatives (MISTI). Priority will be given to projects that are new or entering a new phase; that reflect a balanced collaboration between participants; and that involve undergraduate and graduate students as well as early-career scientists.

“MIT and Imperial College in many ways have similar DNA: They are both faculty-driven and have a combination of practical problem-solving and basic research; both institutions are drivers of innovation and entrepreneurship,” says Bernd Widdig, director of international affairs at MIT. “With this seed fund, we hope to strengthen each other’s capacity to innovate and to conduct cutting-edge research.”

Richard Lester, MIT’s associate provost for international activities and the Japan Steel Industry Professor in the Department of Nuclear Science and Engineering, added, “As two of the world’s leading research universities, MIT and Imperial College London share a passion for solving big problems through the development and application of science and technology. Most of those problems can only be tackled through international collaboration. We are delighted that the new seed fund will open up new opportunities for faculty and students at our two universities to work together."