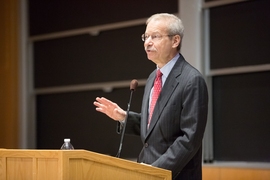 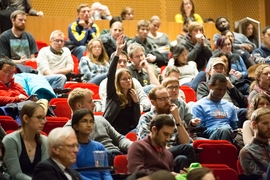 After a career that included work as a White House advisor in the Carter administration and as a partner at Goldman Sachs, Larry Linden SM ’70, PhD ’76 has turned his attention to what he says is the most critical issue facing humanity today: the threat of catastrophic global climate change.

Linden, speaking on campus Wednesday in the opening event of the MIT Climate Change Conversation, urged his audience to join him in making the issue a top priority — and in pushing elected leaders to take concrete action now, before changes to the world’s atmosphere and oceans become irreversibly damaging. And the most effective approach, he emphasized, is by putting a price on carbon emissions from fossil fuels.

That could take a number of forms: an outright tax on carbon, a cap-and-trade arrangement, or a revenue-neutral combination of fees and rebates. While the present political climate in the United States may make any such agreement an uphill battle, Linden stressed that his foundation — the Linden Trust for Conservation — and other groups are working hard to find centrist, bipartisan approaches that could lead toward the goal of limiting global climate change.

Pointing to unexpectedly rapid changes in public opinion in other areas, Linden said that while the prospects for political action on climate may now appear bleak, “We can be surprised, and I hope we will. This is an idea that could go from impossible to inevitable overnight.”

Linden, a board member of the World Wildlife Fund and former chairman of the board of directors of Resources for the Future, described the evolution of his thinking on climate change. He said his awareness of environmental issues started early: As a child in Pasadena, Calif., he personally experienced the terrible, pre-Clean Air Act smog of the Los Angeles basin. Now, he said, “I’m doing everything in my power to move our country to act [on climate change] at the scale that’s required.”

At the current pace, Linden said, we face a rise in temperature of as much as 4 to 6 degrees Celsius by 2100 — and the carbon dioxide humans are now adding to the air will stay there for centuries or even millennia. This could lead, he said, “to abrupt, unpredictable and potentially irreversible changes” — such as the release of frozen methane, or the death of the Amazon rainforest — that could greatly amplify the impacts. If such large changes do occur, Linden said, “I don’t think it’s an overstatement to call this a planetary catastrophe.”

While Linden said the fossil fuel industry will fiercely resist any proposed regulations or fees aimed at limiting carbon emissions, he added that past experience gives reason to treat industry’s claims with some skepticism: Proposals to limit automobile pollution to deal with California’s smog problems faced similar objections, which proved unfounded.

“The financial system is an extremely complex, interrelated system — just like the climate system,” Linden said. While companies never like to be told what to do, he said, if federal rules constrain their actions, they will abide by the law.

In 2009, when federal cap-and-trade legislation was proposed in Congress and passed in the House, Linden was encouraged, thinking that this would be a be “a great start.” But when the proposed law was dropped without even being brought to a vote in the Senate, “I practically fell off my chair,” he said. In the years since, the idea has not resurfaced in Congress.

But something along those lines is exactly what is needed now, Linden said. Research has shown that to avert the most drastic climate consequences, greenhouse gas emissions must be cut by about 80 percent over the next four or five decades. In addition, massive new investment in research and development on alternative energy sources is needed, he said.

The most essential change in policy, Linden said, is a mechanism for “internalizing the externalities”: capturing the great societal costs of fossil fuel emissions in the costs of the fuels themselves. “It could be a cap-and-trade system, or a tax or a fee on carbon, or a limit on emissions,” he said.

Linden said that his foundation is supporting a revenue-neutral carbon tax as the next major national policy step. Studies have shown, he said, that an initial tax of $15 per ton of carbon emitted, with significant annual increases, could cut emissions in half by 2050.

The key, he said, lies in public action to force politicians to act. But the very nature of the issue — requiring strong action now to avoid consequences many years hence — makes action difficult: “If you designed a problem to maximize the political difficulty of addressing it, you couldn’t do much better,” Linden said. “We will therefore need extraordinary political leadership.”

“Bipartisan support is needed,” he added, noting that the Linden Trust is actively working to build support across the political spectrum. “We’re looking for centrist solutions,” he said. Like the climate itself, “our political system is an extremely complicated, interrelated system. There are possible positive feedback loops, and many nonlinear thresholds that can produce irreversible impacts. … That’s what we need to look for now.”

While the process might take years, Linden said, “We have to fight the political fight.” In the meantime, he said, state initiatives might provide useful “working examples” for national action.

Maria Zuber, MIT’s vice president for research, introduced this kickoff event of MIT’s Climate Change Conversation, an effort to involve the MIT community in seeking ways in which the Institute might contribute to addressing the threat of global climate change. The proposals arising from this process, Zuber said, would be “rooted in science, would be bold, would encourage personal engagement.”

Zuber added that while this has been “a divisive issue on many campuses, of the many things that we could possibly do, there must be some things that we can all agree on that would be useful to do, and maybe we should start with doing those.”

Linden's talk was sponsored by the Committee on the MIT Climate Change Conversation, which will organize a series of events during the spring semester to engage the community in thinking about how the Institute can contribute to confronting climate change.

Alumnus Larry Linden to speak on his “journey to climate activism”