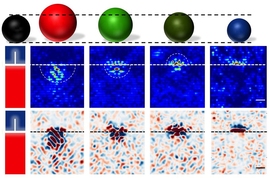 ↓ Download Image
Caption: Simulations show the effects of incorporating atoms of different sizes into the crystal lattice in the cerium dioxide, replacing a cerium atom in the structure, and revealing different amounts of dislocation caused by the different elements. The sizes of the other atoms are compared to a cesium atom (left, in black). The white dashed line shows the plane of the dislocation caused by strain.

Caption:
Simulations show the effects of dislocations in cerium dioxide on the redistribution of differently sized dopant atoms, replacing a cerium atom in the crystal lattice. The results reveal different amounts of segregation around the dislocation caused by the differently sized elements. The sizes of the other atoms are compared to a cesium atom (left, in black). The white dashed line shows the plane of the dislocation caused by strain.
Credits:
Image courtesy of the researchers

Dislocations in oxides such as cerium dioxide, a solid electrolyte for fuel cells, turn out to have a property that is the opposite of what researchers had expected, according to a new analysis at MIT.

Researchers had thought that a certain kind of strain — specifically, strain caused by dislocations in the material’s atomic lattice — would speed the transport of oxygen ions through the material, potentially leading to the much faster diffusion that is necessary in high-performance solid oxide fuel cells, water-splitting, or oxygen-separation membranes. But the new atomic-level simulation of oxide ion transport has revealed that while these dislocations do greatly accelerate atom transport in metals, they can have the opposite effect in this metal-oxide material, and possibly in many others.

Instead of easing ion mobility, it turns out that dislocations in cerium dioxide cause a kind of “traffic jam” for the flowing ions, slowing them to a crawl, says MIT graduate student Lixin Sun, lead author of a paper describing the analysis in the journal Nature Communications.

In cerium dioxide, which is already used as an electrolyte material in solid oxide fuel cells, the simulation shows that “edge dislocations slow down oxide ion diffusion, contrary to the well-known fast diffusion of atoms along dislocations in metals,” says Bilge Yildiz, an associate professor of nuclear science and engineering and of materials science and engineering, who was the paper’s senior author. The surprising result suggests that researchers will need to pursue different approaches in trying to speed up the movement of these ions.

The work is part of ongoing studies by Yildiz and her team, which also includes co-author and research scientist Dario Marrocchelli, into how various kinds of strain in thin-film materials can be used to alter and improve the transport and surface reaction kinetics of those materials, often in dramatic ways.

“People have argued about the role of strain [in cerium dioxide],” Sun says. “Some say strain can enhance the oxide ion transport for devices like solid oxide fuel cells. But others say no, and the experimental results show orders-of-magnitude scatter.”

While there is extensive existing research on ion transport under elastic strain — such as when a rubber band stretches, but then returns to its original length when released — the same is not true of transport along dislocations resulting from plastic strain in oxides.

Plastic strain  — such as when a stretched piece of taffy remains stretched — introduces extended defects called dislocations into crystalline structures; the accelerating effect that dislocations have on atom transport in metals has been widely studied, Yildiz says. “But in oxides, which are important in energy-conversion devices such as fuel cells, electrolyzers, and batteries, the dislocation effects remains largely understudied,” she adds. “It’s never been studied at the atomic level to reveal what an individual dislocation does to oxide ion transport, and that’s why we turned our attention to it.”

Because that kind of strain has been more difficult to simulate and measure, Sun says, “People speculated that it could enhance ionic transport,” since that’s what happens with metals.

While the new findings were based on a detailed analysis of the molecular structure of cerium dioxide, Sun says the results “should be general to those materials that have a high concentration of defects” — which include many, but not all, metal oxides.

Specifically, the results showed that dislocations accumulate too many oxygen vacancies and dopant metal cations, and as a result these ionic defects interact and trap each other, “like too many cars clogging a highway”, Sun says.