How some beetles produce a scalding defensive spray 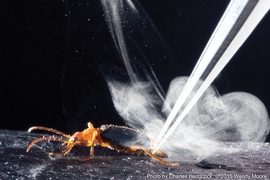 ↓ Download Image
Caption: Bombardier beetles eject a liquid called benzoquinone, which they superheat and expel in an intense, pulsating jet. The explosive mechanism used by the beetle generates a spray that's much hotter than that of other insects that use the liquid, and propels the jet five times faster.
Credits: Photo: Charles Hedgcock 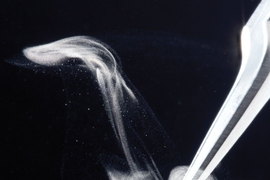 ↓ Download Image
Caption: Bombardier beetles eject a liquid called benzoquinone, which they superheat and expel in an intense, pulsating jet. The explosive mechanism used by the beetle generates a spray that's much hotter than that of other insects that use the liquid, and propels the jet five times faster.
Credits: Photo: Charles Hedgcock

Caption:
Bombardier beetles eject a liquid called benzoquinone, which they superheat and expel in an intense, pulsating jet. The explosive mechanism used by the beetle generates a spray that's much hotter than that of other insects that use the liquid, and propels the jet five times faster.

Bombardier beetles, which exist on every continent except Antarctica, have a pretty easy life. Virtually no other animals prey on them, because of one particularly effective defense mechanism: When disturbed or attacked, the beetles produce an internal chemical explosion in their abdomen and then expel a jet of boiling, irritating liquid toward their attackers.

Researchers had been baffled by the half-inch beetles’ ability to produce this noxious spray while avoiding any physical damage. But now that conundrum has been solved, thanks to research by a team at MIT, the University of Arizona, and Brookhaven National Laboratory. The findings are published this week in the journal Science by MIT graduate student Eric Arndt, professor of materials science and engineering Christine Ortiz, Wah-Keat Lee of Brookhaven National Laboratory, and Wendy Moore of the University of Arizona.

“Their defensive mechanism is highly effective,” Arndt says, making bombardier beetles “invulnerable to most vertebrates, and invertebrates” — except for a few very specialized predators that have developed countermeasures against the noxious spray.

The liquid these beetles eject is called benzoquinone, and is actually a fairly common defensive agent among insects, Arndt says. But bombardier beetles are unique in their ability to superheat the liquid and expel it in an intense, pulsating jet.

The key is that they synthesize the chemical at the instant of use, mixing two chemical precursors in a protective chamber in their hindquarters. As the materials combine to form the irritant, they also give off intense heat that brings the liquid almost to the boiling point — and, in the process, generates the pressure needed to expel it in a jet.

Learn how bombardier beetles detonate small explosions in their bodies to produce a scalding defensive spray.

Seeing inside a living beetle

“For decades, the complex mechanism of how the bombardier beetle achieves spray pulsation as a chemical defense has not been understood, because only external observations were used previously,” Ortiz says. In the current study, the researchers used high-speed synchrotron X-ray imaging to “see” inside the abdomens of living bombardier beetles during explosions. They used a facility at Argonne National Laboratory to carry out the experiments and produce detailed images that revealed, for the first time, how the process works, with a camera recording the action at a rate of 2,000 frames per second.

The X-ray images of the explosion reveal the dynamics of vapor inside the beetles’ abdomens. They show that spray pulsation is controlled by the passageway between two internal chambers; two structures control this process: a flexible membrane and a valve.

The opening and closing of this passageway between a chamber holding the precursor liquid and an explosion chamber seems to take place passively; an increase in pressure during the explosion expands the membrane, closing the valve. Then, after the pressure is released when the liquid is ejected, the membrane relaxes back to its original state and the passage reopens, allowing the next pulse to form. This all takes place so rapidly — not to mention inside the insect — that the process had never been directly observed.

The explosive mechanism used by the bombardier beetle generates a spray that is not only much hotter than that emitted by other insects that use the same chemical irritant, but also propels the jet five times faster. Both the speed and the heat serve to make the spray even more effective against potential predators, Arndt says.

The pulsing nature of the spray may help protect the structure of the beetle’s reaction chamber, Arndt says, allowing time for the chamber walls to cool a bit before the next pulse.

Understanding the beetles’ ability to survive these intense internal explosions may help in designing blast-protection systems; this study shows how the sophisticated and specialized biological design of the system works to simultaneously achieve defensive and protective functions, Ortiz says. The reaction chamber, for example, possesses a rigid, reinforcing structure to minimize stretching and sustain temperature increases during an explosion, while other components allow for controlled, reversible stretching and movement to control the jet of fluid. The dynamics of the spray generation might also provide information useful in the design of propulsion systems, the researchers say.

R. Jeffrey Dean, a professor of biology at Cleveland State University who studies the defense mechanisms of the bombardier beetle, says the new work is a “wonderful confirmation of the qualitative passive ‘pulse jet’ model” first proposed by his team. “Although the findings are not unexpected, I’m amazed at the progressive advances in techniques,” he adds.

Graduate student Eric Arndt discusses his research on the bombardier beetle’s ability to produce a boiling-hot stream of liquid on the PBS program SciTech Now. “Insects, as it turns out, are very good material scientists,” explains Arndt. “Just studying these fundamental systems has the possibility of opening up all kinds of doors in all kinds of industries.”

Sindya Bhanoo writes for The New York Times that MIT researchers have discovered how the bombardier beetle produces blasts of a hot, lethal toxin to fend off predators. “The beetle has a really complicated explosion system that’s all connected together,” explains Prof. Christine Ortiz.

MIT researchers have figured out how the bombardier beetle can fire off chemicals when threatened, writes Washington Post reporter Rachel Feltman. Feltman explains that the researchers used “high-speed x-ray imaging” to examine the beetle’s defense mechanisms in action.

By examining X-ray images, MIT researchers have uncovered how bombardier beetles are able to produce “machine-gun style” blasts of chemicals to fend off predators, reports Andy Coghlan for New Scientist. “The researchers were surprised to find that a passive mechanism generates the pulses,” Coghlan explains.

New MIT research offers a detailed look at how the bombardier beetle produces the scalding black liquid it expels as a defense mechanism, writes Brooks Hays for UPI. “The process operates almost like an assembly line of chambers and valves -- chemicals mixed, pressure builds, chemical released in jet-like spray through valve, relax and repeat.”

A mollusk of a different stripe

Tough as nails, yet clear enough to read through

Protection built to scale--fish scale, that is