Protection built to scale--fish scale, that is 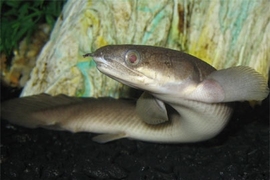 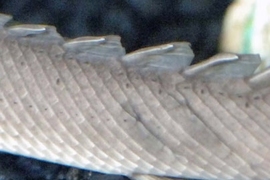 ↓ Download Image
Caption: Researchers at MIT's Institute for Soldier Nanotechnologies have unraveled exactly how the layers of the fish's scales complement one another to protect the soft tissues inside the fish body.
Credits: Photo / Donna Coveney

Caption:
Researchers at MIT's Institute for Soldier Nanotechnologies have unraveled exactly how the layers of the fish's scales complement one another to protect the soft tissues inside the fish body.
Credits:
Photo / Donna Coveney

Scientists seeking to protect the soldier of the future can learn a lot from a relic of the past, according to an MIT study of a primitive fish that could point to more effective ways of designing human body armor.

The creature in question is Polypterus senegalus, a fish whose family tree can be traced back 96 million years and who still inhabits muddy, freshwater pools in Africa. Unlike the vast majority of fish today, P. senegalus sports a full-body armored "suit" that most fish would have had millions of years ago--a throwback that helps explain why it is nicknamed the "dinosaur eel."

It was known that the fish's individual armored scales were comprised of multiple material layers--each of them about 100 millionths of a meter thick. But in a U.S. Army-funded study carried out through the MIT Institute for Soldier Nanotechnologies and published in the July 27 online issue of Nature Materials, a team of MIT engineers unraveled exactly how the layers complement one another to protect the soft tissues inside the fish body--particularly from a penetrating biting attack. P. senegalus is known to be territorial and attack members of its own species that are of similar or smaller size.

Specifically, the team used nanotechnological methods to measure the material properties through the thickness of one individual fish scale--about 500 millionths of a meter thick--and its four different layer materials. The different materials, the geometry and thickness of each layer, the sequence of the layers and the junctions between layers all contribute to an efficient design that helps the fish survive a penetrating attack such as a bite.

This research will help to better understand the relationship between a specific threat and the corresponding design of a protective armor, the team said.

"Many of the design principles we describe--durable interfaces and energy-dissipating mechanisms, for instance--may be translatable to human armor systems," Ortiz added.

One way in which the researchers tested the fish armor was by experimentally mimicking a biting attack on top of an individual scale that had been surgically removed from a living fish. The team found that the design of the P. senegalus armor kept the crack localized by forcing it to run in a circle around the penetration site, rather than spreading through the entire scale and leading to catastrophic failure, like many ceramic materials.

This study was carried out in collaboration with co-author Professor Mary Boyce, chair of MIT's Department of Mechanical Engineering. The study has two first authors: Benjamin Bruet, a former member of Ortiz's lab who recently received a PhD in materials science and engineering from MIT, and Juha Song, a joint doctoral student between Ortiz and Boyce.