Working out in artificial gravity 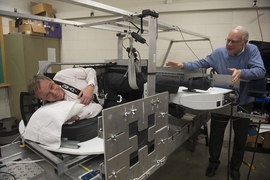 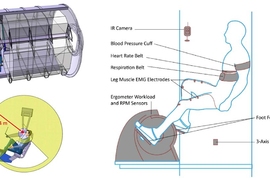 ↓ Download Image
Caption: These illustrations depict how the researchers' new centrifuge could be used in space.
Credits: Courtesy of the researchers

Astronauts on the International Space Station (ISS) have a number of exercise options, including a mechanical bicycle bolted to the floor, a weightlifting machine strapped to the wall, and a strap-down treadmill. They spend a significant portion of each day working out to ward off the long-term effects of weightlessness, but many still suffer bone loss, muscle atrophy, and issues with balance and their cardiovascular systems.

To counteract such debilitating effects, research groups around the world are investigating artificial gravity — the notion that astronauts, exposed to strong centrifugal forces, may experience the effects of gravity, even in space. Engineers have been building and testing human centrifuges — spinning platforms that, at high speeds, generate G-forces strong enough to mimic gravity. An astronaut, riding in a centrifuge, would presumably feel gravity’s reinforcing effects.

Now engineers at MIT have built a compact human centrifuge with an exercise component: a cycle ergometer that a person can pedal as the centrifuge spins. The centrifuge was sized to just fit inside a module of the ISS. After testing the setup on healthy participants, the team found the combination of exercise and artificial gravity could significantly lessen the effects of extended weightlessness in space — more so than exercise alone.

Laurence Young, the Apollo Program Professor in MIT’s Department of Aeronautics and Astronautics, says artificial gravity would be a huge benefit for astronauts, particularly those embarking on long-duration space missions, such as a journey to Mars. The risks, he says, are uncertain, but potentially significant.

“With exploration-class missions, like Mars, where you’re gone for three years, you could run the risk of having astronauts not sufficiently conditioned to perform effectively, and also to not be in good health when they finally get to the surface of Mars,” says Young, a former NASA payload specialist. “You really don’t want to send a jellyfish to represent us on another planet.”

Young says a human centrifuge aboard a Mars-bound spacecraft would help keep an astronaut in shape over the many months it would take to get to the Red Planet. He and his colleagues, former graduate students Ana Diaz and Chris Trigg, have published results from their experiments in the journal Acta Astronautica.

The team’s compact centrifuge resembles a rotating metal cage with three main elements: a chair; a cycle ergometer, or the mechanical portion of a stationary bicycle; and a suite of sensors to measure cardiovascular variables such as blood pressure, heart rate, respiration rate, muscle activity, and foot forces.

The researchers conducted experiments to test human responses and exercise performance at varying levels of artificial gravity. The experiments involved 12 healthy subjects, who participated in three sessions, each consisting of a bicycling workout under one of three artificial gravity levels: zero G, in which the centrifuge did not rotate; 1 G, measured at the feet, in which the centrifuge spun at 28 revolutions per minute (rpm); and 1.4 G, also measured at the feet, at 32 rpm.

During each session, participants were asked to pedal for 15 minutes at three workout intensities, or levels of resistance, set by the cycle ergometer. The remaining 10 minutes involved spinning up and slowing down the centrifuge.

Beyond a “universal solution”

After each session, participants filled out a survey to gauge symptoms such as motion sickness and light-headedness. Overall, Diaz found that participants tolerated the experiments well, suffering little motion sickness even while spinning at relatively high velocities. Participants only reported feelings of discomfort while initially speeding up and slowing down.

“During the spinning process, participants were pushed against the chair due to the centrifugal force, making them sit comfortably, and facilitating their leg biomechanics for biking,” Diaz says.

As the researchers increased the centrifuge’s spin, raising its artificial gravity, participants used correspondingly more force to pedal — an unsurprising but encouraging result.

Similarly, as artificial gravity intensified, so did participants’ overall cardiovascular activity, a response that Diaz says may be beneficial over the long term.

Young says the study may begin to bridge two seemingly opposing camps: those who believe exercise alone will prevent bone loss, muscle atrophy, and other effects of extended weightlessness, and those who believe in artificial gravity as the solution.

“I think the principal finding here is supporting the conclusion that exercise alone is not a sufficient countermeasure,” Young says. “For the first time, we’re showing there’s a symbiosis when one combines the best aspects of exercise, and the best aspects of artificial gravity. So I feel this is an important demonstration.”

This research was funded in part by the National Space Biomedical Research Institute and a Skoltech/MIT seed grant.

The pull of artificial gravity