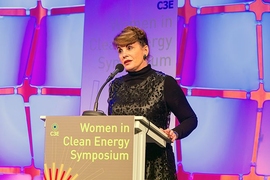 Melanie Kenderdine, as the first executive director of the MIT Energy Initiative (MITEI), helped to launch an international program to increase women’s participation and leadership in the energy field called Clean Energy Education and Empowerment, or C3E, in 2012.

Last Thursday, Kenderdine, now the director of the Office of Energy Policy and Systems Analysis at the U.S. Department of Energy, returned to MIT to give the keynote address at the fourth annual U.S. C3E Women in Clean Energy symposium and awards program. Creating this event to recognize women in a variety of energy disciplines at all stages of their careers, she said, “was one of the most rewarding experiences I’ve ever had.”

In her talk at the two-day MITEI event, Kenderdine focused on the DOE’s recently released Quadrennial Energy Review, a project initiated by Secretary of Energy Ernest Moniz, MITEI’s former director, to outline priorities for the nation’s energy research and policies over the coming years. The report, she said, gives a sense of the “key drivers and challenges” in the field of energy.

Kenderdine began by recapping the scientific understanding of the threat of climate change, using a depiction of the probabilities of various outcomes developed by Ronald Prinn, co-director of MIT’s Joint Program on the Science and Policy of Global Change.

Prinn used a pair of roulette wheels to starkly communicate the dangers of inaction: The wheel reflecting the probabilities under a “business as usual” scenario shows a significant probability of an average temperature increase of 7 degrees Celsius by the century’s end — an outcome that Kenderdine deadpanned would be “shall we say, transformational for the planet.” (Most scientists agree that any increase of more than 2 C could produce catastrophic results.)

But that outcome is far from predetermined, she emphasized. In the corresponding roulette wheel, assuming that the world’s nations agree to substantial curbs in greenhouse gas emissions, the probability of exceeding that limit drops substantially. And there are indeed many options available to make such reductions practical, Kenderdine said.

Showing a chart of the sources and uses of the world’s various kinds of energy, Kenderdine pointed out that almost half of the world’s energy is wasted. Curbing even a fraction of that waste could make substantial dents in emissions.

That’s only one piece of the puzzle, since with growing population and rising standards of living, the world will consume a projected four times as much energy by 2100 as is used today, Kenderdine said. But there are some encouraging signs already.

Greenhouse gas emissions have actually been declining slightly, for example, even as world GDP has increased — providing a stark refutation of claims that the two measures change in lockstep. This is partly due to a dramatic shift from coal to natural gas, she said — a change largely enabled by DOE-funded innovations: “The DOE invested heavily in shale gas technology,” Kenderdine said.

But because energy industries are capital-intensive, with expensive plants built to operate for many decades, it is essential to have clear priorities for future development, so as to avoid huge investments in plants whose energy may grow incompatible with future economic and regulatory conditions.

One key need, Kenderdine said, to enable the new energy developments that are most needed, is a drastic modernization of the electric grid, which has grown up piecemeal over the last century. Another priority is to enhance the resiliency and reliability of the nation’s existing energy systems, she said.

Some needed changes are in the regulatory domain, Kenderdine said. For example, current federal laws on replacing energy infrastructure after a natural disaster require replacing a facility as it was before the disaster, rather than allowing for modernization or improvement.

Another area where modernization is desperately needed, she said, is in natural gas delivery: Many gas lines in cities are decades old. Recent explosions in major cities have shown the dangers of leaking gas pipes, and the need for replacing those old pipes: An explosion that leveled an apartment complex in New York last year, for example, involved a pipe system that was 104 years old. Boston, Kenderdine pointed out, has had thousands of gas leaks reported in the last few years, compared with just a handful in similarly sized Indianapolis, which modernized its pipes a few years ago.

The DOE’s Quadrennial Energy Review, Kenderdine said, includes 63 specific recommendations, which would likely have a total cost of $10 billion to $12 billion over the next decade. But there are great opportunities for improvements, particularly in the developing world, she said, where in many cases it may be possible to move directly into more efficient, modern generating and distribution systems.

Such developments, Kenderdine said, can “make a huge difference in people’s lives.”

The C3E symposium and awards program is a partnership of DOE and MITEI, under the auspices of the multi-governmental Clean Energy Ministerial.

DOE, MITEI announce a women in clean energy program for the U.S.