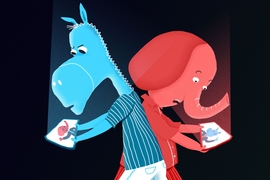 Bad news, fans of rational political discourse: A study by an MIT researcher shows that attempts to debunk political rumors may only reinforce their strength.

“Rumors are sticky,” says Adam Berinsky, a professor of political science at MIT, and author of a paper detailing the study. “Corrections are difficult, and in some cases can even make the problem worse.”

More specifically, Berinsky found in an experiment concerning the Affordable Care Act (ACA) that rebuttals of political rumors about the supposed existence of “death panels” sometimes increased belief in the myth among the public.

In the case of the “death panels,” Berinsky’s research indicates that the best way to counteract these rumors is to find a political figure who could credibly debunk the rumor based on their broader political stand — a Republican senator, for instance.

As Berinsky sees it, it is harder for a democracy to function well in a public environment pervaded by political myths. The nonexistent “death panels” were alleged to have decision-making power over whether citizens received health care; in reality, as Berinsky points out, the ACA had provisions to pay doctors for counseling patients about their end-of-life options.

“It makes communication between politicians and citizens kind of difficult, if these people think politicians are trying to kill their grandmothers,” Berinsky observes.

The paper containing the results, “Rumors, Truths, and Reality: A Study of Political Misinformation,” will be published in the British Journal of Political Science.

Berinsky conducted the experiment with three separate waves of public-opinion surveys in 2010, encompassing nearly 2,000 voters. The surveys tested multiple methods of debunking rumors about the ACA on multiple categories of respondents.

In each scenario, the acceptance rate of the rumor went up, while only the Republican-based debunking markedly changed the rejection rate. Other slices of the survey group yielded similar patterns in which both acceptance and rejection rates rose, with Democratic-sourced debunking efforts being the least effective.

When Berinsky conducted follow-up surveys of voters weeks later, he found that about 43 percent of all respondents (not just “attentive” ones) rejected the rumor. A nonpartisan debunking of the rumor produced a 51 percent rejection rate, but a debunking stemming from Republican sources yielded a 58 percent rejection rate, while a Democratic correction led to 53 percent of people rejecting the rumor.

A reason for the results, Berinsky surmises, is apparently minimal belief, among contemporary voters, in the existence of neutral sources of information.

“No one perceives these [sources] as nonpartisan,” he says.

Berinsky’s experiment also produced new data about the attachment of the electorate to myths in general. He asked respondents whether they believed in any or all of seven different myths, six of which concerned politics — such as the myth that President Barack Obama is a Muslim, or the rumor that vote fraud in Ohio swung the 2004 presidential election to then-President George W. Bush. Only 5 percent of the population believed four or more of the seven rumors, but on average, people believed 1.8 of the rumors.

As Berinsky sees it, that means belief in seemingly outlandish ideas is not the province of a relatively small portion of uninformed, conspiracy-minded voters.

Fact: Book in the works

Other scholars say the study is an important addition to the academic literature on political rumors and voter knowledge.

Brendan Nyhan, an assistant professor of political science at Dartmouth College, calls it an “important and interesting paper” that he believes will be “influential and widely read.”

Berinsky’s research, he observes, is both answering some questions about politics while opening up others: “We still have much to learn about the psychological processes that cause people to believe in false claims and how to more effectively counter them. Adam’s work will help stimulate new research in both of these areas.”

In that vein, this paper is part of a larger project Berinsky has undertaken about political rumors and public opinion; he is currently working on a book project on the topic as well, to be published by Princeton University Press.

“There’s a lot more interest about this in political science and psychology than there was 10 years ago,” Berinsky says. He believes practitioners — politicians, strategists, consultants, and more — seem increasingly attuned to the research that scholars are producing in this vein as well.

“There is a lot more interest in trying to find out how people think, rather than assuming you know how they think,” Berinsky says.

In an article for The New York Times about why people believe false information, Amanda Taub and Brendan Nyhan highlight a study by Prof. Adam Berinsky that examines political myths. Berinsky found that “a surprising co-partisan source (a Republican member of Congress) was the most effective in reducing belief in the ‘death panel’ myth about the Affordable Care Act.”

In an NPR article about the difficulty of dispelling political rumors, Danielle Kurtzleben cites a study by Prof. Adam Berinsky that shows trying to correct political myths may only entrench them further.