What counts as fair? 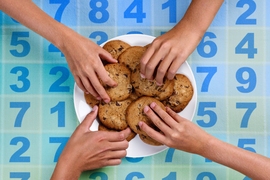 There are many ways to divvy up a pile of cookies. Among the possibilities: Everyone can get an equal number, or those who contributed more to the cookie baking can get a larger share.

In studies, young children usually default to splitting up resources equally. However, as children get older, they shift toward a merit-based approach, in which people who work harder on a task are rewarded with a bigger portion.

New research from neuroscientists at MIT and the University of Rochester suggests that this shift is heavily influenced by children’s ability to count. In a study of children from the Tsimane’ tribe in the Amazon, who learn to count at widely varying ages, they found that counting ability was the biggest predictor of how children would divide resources.

“It’s a very strong effect,” says Julian Jara-Ettinger, an MIT graduate student and lead author of the study, which appears in Developmental Science.

The paper’s senior author is Steve Piantadosi, a former MIT graduate student who is now an assistant professor at Rochester.

Despite numerous studies on the transition to merit-based resource distribution, there has been little agreement on why or exactly when it occurs.

While much evidence suggests that the transition occurs around the age of 5 or 6, some studies have suggested that children as young as 3 will also distribute resources based on merit, but only if the number of items to be shared cannot be divided evenly. In those cases, children usually give extra items to those who worked harder.

“There is evidence that even very young kids, if you force them to choose, they’ll give more to the person with more merit,” says Edward Gibson, a professor of brain and cognitive sciences at MIT and an author of the study. “It’s not that they don’t understand the concept of more merit, it’s just that they probably don’t know how to do the distribution.”

A few years ago, Jara-Ettinger hypothesized that the transition to merit-based allocation might depend on the ability to count. In previous studies, it has been difficult to measure the effects of counting ability because for children in most industrialized societies, that ability is very closely correlated with age. However, in a 2014 study, Gibson’s team found that Tsimane’ children learn to count over a range of ages — usually between 5 and 8.

During the new study, conducted over two visits to the Tsimane’ in 2013 and 2014, the researchers tested 70 children between the ages of 3 and 12.

Each child was first shown two drawings of identical children with different colored shirts. They were told that the villagers had sent the two children to pick some bananas, and one child had worked very hard and brought back 18 bananas, while the other picked only four. The researchers then gave the children some paper cookies (always an even number) and asked them to distribute them as a reward.

The researchers also tested the children’s ability to count, measured by the same test used in their 2014 study. An analysis of the data revealed that counting ability strongly predicted whether the children would distribute more cookies to the child who worked harder. However, age and years of education did not.

“We have known that understanding numbers is very important for thinking about mathematical ideas, but what’s striking is the finding that it also shapes how we think about things like our judgment of what’s fair. It goes beyond math into the social domain,” says Susan Levine, a professor of psychology at the University of Chicago who was not involved in the research.

It appears that while children understand the concept of rewarding more effort before they learn to count, they can’t accurately translate that into a distribution that reflects each person’s contribution, the researchers say. In a related study, not yet published, they have found that as children learn to count, they also gain an understanding of how sets of objects change as you add items or remove them.

“Once they understand how sets of objects change as you manipulate them, that helps them reason more fluently about how to transform the sense that someone deserves more into deciding exactly how much more,” Jara-Ettinger says.

One of the paper authors, Celeste Kidd at Rochester, is now studying whether the correlation between counting ability and merit-based distribution also appears in American children, who usually learn to count around the age of 3 or 4.