3Q: Thomas Levenson on the hunt for Vulcan, the missing planet 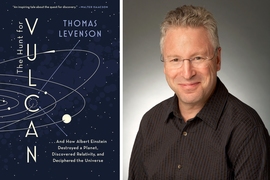 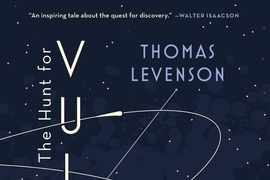 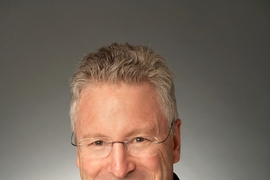 Ever heard of the planet Vulcan? In the late 1800s, many scientists thought it was real: a hot planet near Mercury (thus named for the god of the forge), whose gravitational pull supposedly caused a wobble in Mercury’s orbit. But in 1915, Albert Einstein killed off this notion, as MIT’s Thomas Levenson recounts in his new book, “The Hunt for Vulcan,” published today by Random House. As Einstein’s calculations showed, Mercury’s orbit fit perfectly with his theory of general relativity, in which gravity merely follows the shape of spacetime — ending any apparent need to believe in Vulcan. MIT News sat down with Levenson, director of MIT’s Graduate Program in Science Writing, to talk about his book.

Q. For how long did people believe in Vulcan, and why?

A. Belief in Vulcan lasts from 1859 to 1915. But the story really starts in the 1680s, when Isaac Newton writes the “Principia,” the foundational text of the scientific revolution, and in it describes and works out the consequences of his laws of motion and the law of universal gravitation. Newton’s successors tried to apply that law with more and more sophistication to problems you actually see in nature.

The great romantic triumph of Newtonian science was the discovery of the planet Neptune, in 1846. There were anomalies in the orbit of Uranus, which had been discovered in 1781. The French astronomer Urban Jean Joseph Le Verrier calculated and said those problems can be explained if there were another planet we haven’t found yet beyond the orbit of Uranus, whose gravitational tug is pulling on Uranus to create these anomalies. Within a couple of hours of looking for it, observational astronomers found Neptune, which was a very powerful emotional confirmation of Newton’s worldview.

Le Verrier [then] found a tiny residue of a wobble on the arc of Mercury. So he followed exactly the same reasoning, for exactly the same reasons: There had to be another body, another mass, pulling on it to produce that anomaly. What followed was a cat-and-mouse game: Some people looked for Vulcan and couldn’t find it, while there were repeated reports of discovery by professionals and amateurs alike.

Q. But then Albert Einstein quashed all this — by demonstrating that Mercury’s wobble fit his notion of general relativity, in which gravity represents the contours of spacetime. So is this book another way of examining how we got from classical physics to relativity, in a sense?

A. Yes, Einstein comes along and because of a logical contradiction between his special theory of relativity and Newtonian gravitation, looks for a different way to think about gravity, and finds it in general relativity. And then uses Mercury’s orbit to test whether or not his theory is correct. Which it is.

Very unusually for Einstein, when he got the right answer in his calculations, sitting at his desk … he was beside himself with joy, and couldn’t work for a couple of days. Einstein was not a person who was given to wild extremes of emotion. When he got the correct orbit for Mercury, for him that was tantamount to confirmation of general relativity.

Q. What larger lessons about science do you take from this tale?

A. There are two really interesting things to tell about this story. One is when you have a worldview that is so powerful and works so well, it conditions the way you see the world. There was absolutely every reason Vulcan should exist. It wasn’t a crazy idea at all. These people weren’t crazy. They were doing science the way you expect science to be done. But the internal emotional logic as well as mathematical logic led [some] astronomers to persuade themselves they’d seen something that wasn’t there. That’s just a straight-up cautionary tale.

The other interesting thing is what happens when [some] people realized Vulcan wasn’t there. There’s the famous cliché that a single ugly fact can destroy the most beautiful theory. But so as long as Newtonian gravitation was the way to understand the universe, it was hard to understand what the absence of Vulcan meant. It wasn’t until Einstein came along with a theoretical construct that was in conflict with Newtonian gravitation that it became [clear]: The problem wasn’t the missing planet, the problem was thinking about space and time in the wrong way.

One of the things I try to do in this book is say, we may know more than the past, but we’re not better at this than they were. They were working on a difficult idea, with difficult observations, at the limit of scientific knowledge of the time, and they got something wrong. But we are not immune to measurement error, and we’re certainly not immune to the capacity for human self-deception. Historians 100 years from now will laugh at us just as we laugh at our friends from 100 years ago.

On NPR’s All Things Considered, Prof. Thomas Levenson speaks about his book on the 50-year search for a non-existent planet, an example, he explains, of how science really works. “It takes a great leap of the imagination to get from what you really know you know to the wacky thing that turns out to be more true.”

Nancy Szokan of The Washington Post reviews Prof. Thomas Levenson’s new book “The Hunt For Vulcan.” “At heart, this is a story about how science advances, one insight at a time,” writes Szokan. “But the immediacy, almost romance, of Levenson’s writing makes it almost novelistic.”

Matthew Price of The Boston Globe reviews “The Hunt for Vulcan” by Prof. Thomas Levenson, which chronicles the history of the search for the non-existent planet Vulcan. “The key question, as Levenson puts it, is ‘what happens when a prediction fails to find its match in nature?’” writes Price.