Unlocking the potential of simulation software 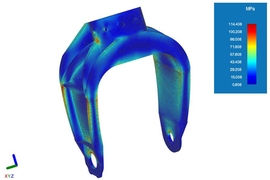 ↓ Download Image
Caption: A screenshot of Akselos' software running in a Web browser for 2.01x. This app shows the stresses in the landing gear for a solar-powered airplane.
Credits: Courtesy of Akselos 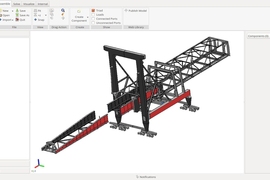 ↓ Download Image
Caption: A screenshot of component-based assembly of the model of shiploading infrastructure.
Credits: Courtesy of Akselos 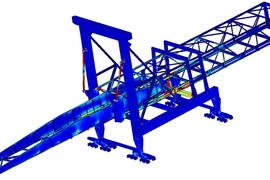 ↓ Download Image
Caption: The simulation result, showing contours of the stress, for the shiploading infrastructure.
Credits: Courtesy of Akselos

Caption:
A screenshot of Akselos' software running in a Web browser for 2.01x. This app shows the stresses in the landing gear for a solar-powered airplane.
Credits:
Courtesy of Akselos

Caption:
A screenshot of component-based assembly of the model of shiploading infrastructure.
Credits:
Courtesy of Akselos

Caption:
The simulation result, showing contours of the stress, for the shiploading infrastructure.
Credits:
Courtesy of Akselos

With a method known as finite element analysis (FEA), engineers can generate 3-D digital models of large structures to simulate how they’ll fare under stress, vibrations, heat, and other real-world conditions.

Used for mapping out large-scale structures — such as mining equipment, buildings, and oil rigs — these simulations require intensive computation done by powerful computers over many hours, costing engineering firms much time and money.

Now MIT spinout Akselos has developed novel software, based on years of research at the Institute, that uses precalculated supercomputer data for structural components — like simulated “Legos” — to solve FEA models in seconds.

A simulation that could take hours with conventional FEA software, for instance, could be done in seconds with Akselos’ platform.

Hundreds of engineers in the mining, power-generation, and oil and gas industries are now using the Akselos software. The startup is also providing software for an MITx course on structural engineering.

“We’re trying to unlock the value of simulation software, since for many engineers current simulation software is far too slow and labor-intensive, especially for large models,” Knezevic says. “High-fidelity simulation enables more cost-effective designs,  better use of energy and materials, and generally an increase in overall efficiency.”

Akselos’ software runs on a novel technique called the “reduced basis (RB) component method,” co-invented by Anthony Patera, the Ford Professor of Engineering at MIT, and Knezevic and Huynh. (The technique builds on a decade of research by Patera’s group.)

This technique merges the concept of the RB method — which reproduces expensive FEA results by solving related calculations that are much faster — with the idea of decomposing larger simulations into an assembly of components.

“We developed a component-based version of the reduced basis method, which enables users to build large and complex 3-D models out of a set of parameterized components,” Knezevic says.

In 2010, the firm’s founders were part of a team, led by Patera, that used that technique to create a mobile app that displayed supercomputer simulations, in seconds, on a smartphone.

Today’s Akselos software runs on a similar principle, but with new software, and cloud-based service. A supercomputer precalculates individual components, such as, say, a simple tube or a complex mechanical part. “And this creates a big data footprint for each one of these components, which we push to the cloud,” Knezevic says.

These components contain adjustable parameters, which enable users to vary properties, such as geometry, density, and stiffness. Engineers can then access and customize a library of precalculated components, drag and drop them into an “assembler” platform, and connect them to build a full simulation. After that, the software will reference the precomputed data to create a highly detailed 3-D simulation in seconds.

In one demonstration, for instance, a mining company used components available in the Akselos library to rapidly create a simulation of shiploader infrastructure — complete with high-stress “hot spots” — that needed inspection. When on-site inspectors then found cracks, they relayed that information to the engineer, who added the damage to the simulation, and created modified simulations within a few minutes.

“The software also allows people to model the machinery in its true state,” Knezevic says. “Often infrastructure has been in use for decades and is far from pristine — with damage, or holes, or corrosion — and you want to represent those defects,” Knezevic says. “That’s not simple for engineers today, since with other software it’s not feasible to simulate large structures in full 3-D detail.”

Ultimately, pushing the data to the cloud has helped Akselos, by leveraging the age-old tradeoff between speed and storage: By storing and reusing more data, algorithms can do less work and hence finish more quickly.

“These days, with cloud technology, storing lots of data is no big deal. We store a lot more data than other methods, but that data, in turn, allows us to go faster, because we’re able to reuse as much precomputed data as possible,” he says.

Bringing technology to the world

Akselos was founded in 2012, after Knezevic and Huynh, along with Leurent — who actually started FEA work with Patera group back in 2000 — earned a Deshpande innovation grant for their “supercomputing-on-a-smartphone” innovation.

“That was a trigger,” Knezevic says. “Our passion and goal has always been to bring new technology to the world. That’s where the Deshpande Center and the MIT innovation ecosystem are great.”

From there, Akselos grew with additional help from MIT’s Venture Mentoring Service (VMS), whose mentors guided the team in fundraising, sales, opening a Web platform to users, and hiring.

“We needed a sounding board,” Knezevic says. “We’d go into meetings and bounce ideas around to help us make good decisions. I think all our decisions were influenced by that type of discussion. It’s a real luxury that you don’t have in other places.”

In expanding their visibility, and to get back into the academic sphere, Akselos has teamed with Simona Socrate, a principal research scientist in mechanical engineering at MIT, who is using the startup’s software — albeit a limited version — in her MITx class, 2.01x (Elements of Structures).

Feedback from students has been positive, Knezevic says. Primarily, he hears that the software is allowing students to “build intuition for the physics of structures beyond what they could see by simply solving math problems.”

“In 2.01x  the students learn about axial loading, bending, and torsion — we have apps for each case so they can visualize the stress, strain, and displacement in 3-D in their browser,” he says. “We think it’s a great way to show students the value of fast, 3-D simulations.”

Commercially, Akselos is expanding, hiring more employees in its three branches — in Boston, Vietnam, and Switzerland — building a community of users, and planning to continue its involvement with edX classes.

On Knezevic’s end, at the Boston office, it’s all about software development, tailoring features to customer needs — a welcome challenge for the longtime researcher.

“In academia, typically only you and a few colleagues use the software,” he says. “But in a company you have people all over the world playing with it and testing it, saying, ‘This button needs to be there’ or ‘We need this new type of analysis.’ Everything revolves around the customer. But it was good to have that solid footing in academic work that we could build on.”

Supercomputing on a cell phone