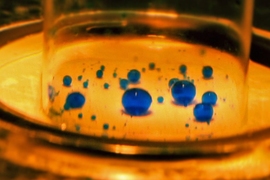 ↓ Download Image
Caption: Tiny droplets of water, colored blue, are suspended in water on top of a membrane developed by the MIT team. Thanks to the membrane’s tiny pores, with a special coating that attracts water and repels oil, the droplets shrink as they pass through the membrane, ultimately leaving just pure oil behind. A similar membrane with a different coating can do the reverse, allowing oil droplets to pass while blocking water.
Credits: Courtesy of the researchers 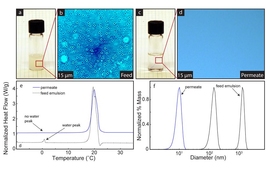 Caption:
Tiny droplets of water, colored blue, are suspended in oil on top of a membrane developed by the MIT team. Thanks to the membrane’s tiny pores, with a special coating that attracts water and repels oil, the droplets shrink as they pass through the membrane, ultimately leaving just pure oil behind. A similar membrane with a different coating can do the reverse, allowing oil droplets to pass while blocking water.

Whenever there is a major spill of oil into water, the two tend to mix into a suspension of tiny droplets, called an emulsion, that is extremely hard to separate — and that can cause severe damage to ecosystems. But MIT researchers have discovered a new, inexpensive way of getting the two fluids apart again.

Their newly developed membrane could be manufactured at industrial scale, and could process large quantities of the finely mixed materials back into pure oil and water. The process is described in the journal Scientific Reports by MIT professor Kripa Varanasi, graduate student Brian Solomon, and postdoc M. Nasim Hyder.

In addition to its possible role in cleaning up spills, the new method could also be used for routine drilling, such as in the deep ocean as well as on land, where water is injected into wells to help force oil out of deep rock formations. Typically, Varanasi explains, the mixed oil and water that’s extracted is put in large tanks to allow separation by gravity; the oil gradually floats to the top, where it can be skimmed off.

That works well when the oil and water are “already large globs of stuff, already partly separated,” Varanasi says. “The difficulty comes when you have what is called an emulsion, with very tiny droplets of oil stabilized in a water background, or water in an oil background. The difficulty significantly increases for nanoemulsions, where the drop sizes are below a micron.”

To break down those emulsions, crews use de-emulsifiers, which can themselves be environmentally damaging. In the 2010 Deepwater Horizon oil spill in the Gulf of Mexico, for example, large amounts of dispersants and de-emulsifiers were dumped into the sea.

“After a while, [the oil] just disappeared,” Varanasi says, “but people know it’s hidden in the water, in these fine emulsions.” In the case of land-based drilling, where so-called “produced water” from wells contains fine emulsions of oil, companies sometimes simply dilute the water until it meets regulatory standards for being discharged into waterways.

“It’s a problem that’s very challenging to the industry,” Varanasi says, “both in terms of recovering the oil, and more importantly, not discharging the produced water into the environment.” 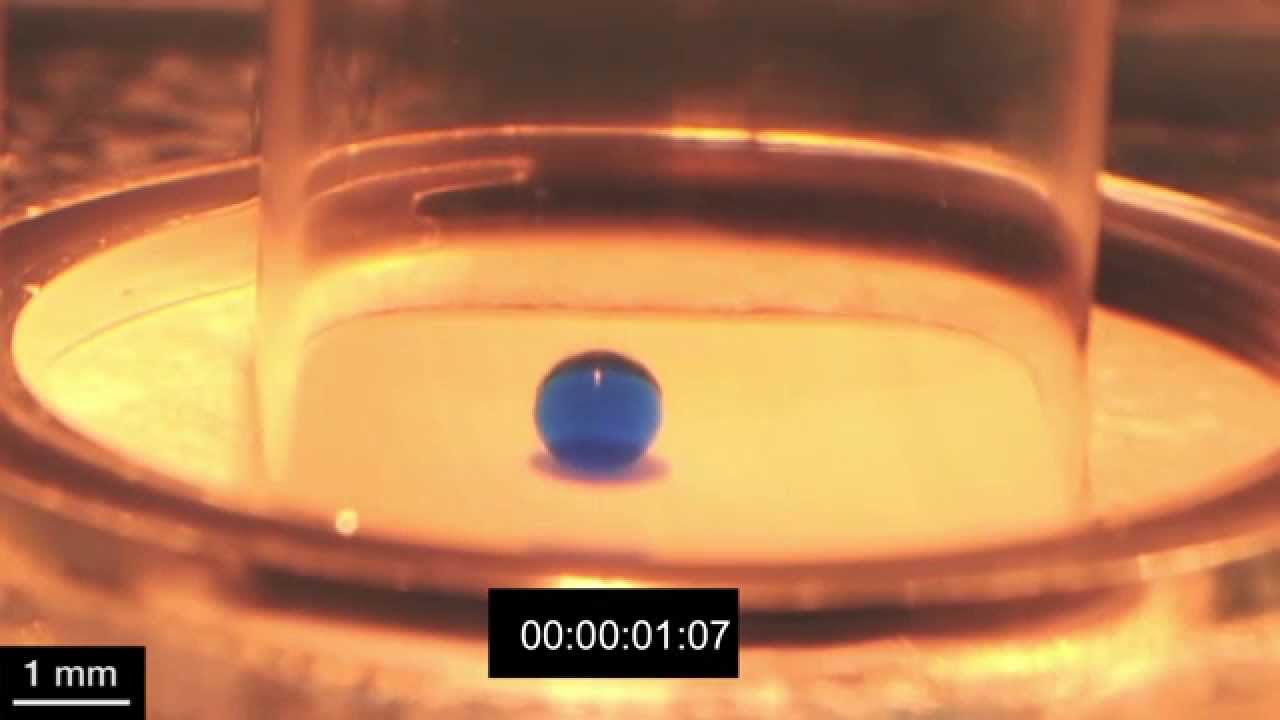 Play video
Tiny droplets of water, colored blue, are suspended in oil on top of a membrane developed by the MIT team. Thanks to the membrane's tiny pores, with a special coating that attracts water and repels oil, the droplets shrink as they pass through the membrane, ultimately leaving just pure oil behind. A similar membrane with a different coating can do the reverse, allowing oil droplets to pass while blocking water.

The new approach developed by Varanasi’s group uses membranes with hierarchical pore structures. The membranes combine a very thin layer of nanopores with a thicker layer of micropores to limit the passage of unwanted material while providing strength sufficient to withstand high pressure and throughput. The membranes can be made with contrasting wetting properties so their pores either attract oil and repel water, or vice versa.

“This allows one material to pass while blocking the other with little flow resistance,” Varanasi says. The choice of membrane, or a combination of both, could be based on which material predominates in a particular situation, he explains.

The pores have to be smaller than the droplets in order to block them, Varanasi says — which, in the case of nanoemulsions, leads to very small pores and significant flow resistance, limiting the throughput. Throughput can be improved by increasing the pressure gradient or making the separation layer very thin, but past attempts to make such thin, small-pore membranes have yielded materials that tear even under nominal pressure. The team’s solution: an ingenious process that makes large holes on one side that penetrate most of the way through the material, providing little resistance to flow, as well as nanoscale holes on the other surface, in contact with the emulsion to be separated. The thin layer with nanoscale pores allows for separation, and the thick layer with large pores provides mechanical support.

The approach can be adapted to industrial processes used today for making large membranes in a high-volume, roll-to-roll manufacturing system, so it should be relatively easy to achieve large-scale production, Varanasi says.

A polymer solution is poured onto a glass plate, Hyder explains; this casting plate is then immersed in a nonsolvent bath to induce precipitation to form a film. The technique creates a bilayered polymer phase: One layer is polymer-rich, and one is not. As they precipitate out, the polymer-rich phase develops the smaller pores; the polymer-lean phase makes the larger ones. Since the solutions form a single sheet of film, there is no need for bonding layers together, which can result in a weaker filter.

“There is no separate layer, it’s completely integrated, so the mechanical support is integral,” Hyder says. As a final stage, a different polymer is added to give the material — including the lining of the pores — surfaces that attract or repel oil and water. The skin layer thickness can be further optimized using polymeric pore formers to enhance throughput.

Microscopy images show the membrane in operation, with dye added to the water to make the droplets more obvious. Within seconds, an oil-water mixture that is heavily clouded becomes perfectly clear, as the water passes through the membrane, leaving pure oil behind. As shown in the microscope images, Solomon says, “We’re not only getting rid of the droplets you can see, but also smaller ones,” which contribute to the cloudy appearance.

Anish Tuteja, an assistant professor of materials science and engineering at the University of Michigan who was not involved in this research, calls it "a very interesting and innovative approach to fabricating membranes that can separate out nanoemulsions." He adds that the method this team used "is quite innovative. People have previously attempted to fabricate hierarchical membranes, but this is probably one of the simplest and most scalable techniques for fabricating such membranes."

Assuming the membranes perform well under real-world conditions, Tuteja says, "they could have a very big impact. Oil-water nanoemulsions are ubiquitous in a number of industries, and these membranes could enable rapid separation of those emulsions with high purity and efficiency."

The team is working with Shell, which supported the research through the MIT Energy Initiative, to further test the material.