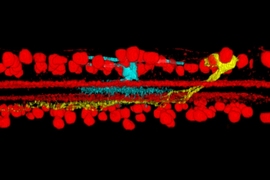 ↓ Download Image
Caption: The yellow and blue cells are two retinal ganglion cells of different types obtained from different mice. The researchers determined their relative positions using the two surfaces (in red) created by the arbors of retinal cells called starburst amacrine cells. The vertical distance between the arbors of these three different neuron types is precisely maintained across different animals and different parts of the retinas.
Credits: Image: Sumbul Uygar 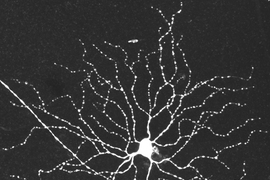 ↓ Download Image
Caption: This image, taken with a light microscope, shows the body and many branching dendrites of a retinal ganglion cell.
Credits: Image: Sumbul Uygar and Sen Song

Caption:
The yellow and blue cells are two retinal ganglion cells of different types obtained from different mice. The researchers determined their relative positions using the two surfaces (in red) created by the arbors of retinal cells called starburst amacrine cells. The vertical distance between the arbors of these three different neuron types is precisely maintained across different animals and different parts of the retinas.
Credits:
Image: Sumbul Uygar

Caption:
This image, taken with a light microscope, shows the body and many branching dendrites of a retinal ganglion cell.
Credits:
Image: Sumbul Uygar and Sen Song

As we scan a scene, many types of neurons in our retinas interact to analyze different aspects of what we see and form a cohesive image. Each type is specialized to respond to a particular variety of visual input — for example, light or darkness, the edges of an object, or movement in a certain direction.

Neuroscientists believe there are 20 to 30 types of these specialized neurons, known as retinal ganglion cells, but they have yet to come up with a definitive classification system.

A new study from MIT neuroscientists has made some headway on this daunting task. Using a computer algorithm that traces the shapes of neurons and groups them based on structural similarity, the researchers sorted more than 350 mouse retinal neurons into 15 types, including six that were previously unidentified.

This technique, described in the March 24 online edition of Nature Communications, could also be deployed to help identify the huge array of neurons found in the brain’s cortex, says Uygar Sumbul, an MIT postdoc and one of the lead authors of the paper. “This delineates a program that we should be doing for the rest of the retina, and elsewhere in the brain, to robustly and precisely know the cell types,” he says.

The paper’s other lead author is former MIT postdoc Sen Song. Sebastian Seung, a former MIT professor of brain and cognitive sciences and physics who is now at Princeton University, is the paper’s senior author.

When light strikes the retina, it first encounters photoreceptor cells, which relay visual input through several layers of neurons in the retina. The final layer is composed of ganglion cells, which feed information to the brain’s visual processing regions via the optic nerve.

Neuroscientists have identified at least nine types of ganglion cells with distinct functions, structures, and genetic makeup. For example, the so-called “J cells” respond only to upward motion and express an adhesion molecule called JAM-B that helps them connect with the other cells they need to communicate with.

Other known ganglion types respond only when light is turned on or off, and still others monitor the overall level of light and send the information to parts of the brain that control circadian rhythms. These genetically and functionally defined cell types offered a valuable starting point for the new study, which aimed to create a system that would accurately classify known neurons and also assign unknown neurons to the correct groups.

In total, the researchers imaged 363 cells — 111 that were genetically known and 252 that were randomly selected. Using a computer algorithm, they traced along the many branches, known as dendrites, that extend from each cell to connect with other cells. These dendrites form clusters called arbors, which were the key to the researchers’ classification system.

After each neuron’s arbor was diagrammed, the researchers used a computer program to align and condense each one so that the arbors were represented by smaller, but still distinctive, shapes. By comparing these shapes, the computer program correctly classified all of the known neurons. Among the randomly selected neurons, some ended up being grouped with the known types, while others formed six new clusters yet to be identified.

This approach is an important contribution to efforts to create a “parts list” for the retina, which is necessary to help researchers learn more about how the eye and brain interpret visual information, says Constance Cepko, a professor of genetics at Harvard Medical School. Previous efforts have focused on analyzing only a small number of cell types at a time, and it’s often difficult to accurately compare the types identified by different research groups, she says.

“Different people have used different methods, but it’s rare to be able to apply one method to all cell types,” says Cepko, who was not involved in this research. “What’s nice here is that this is a comprehensive approach to try to get a good amount of data on many different cells.”

The MIT team also found that the layered arrangement of the neurons’ dendrites is very precise. While the bodies of the ganglion cells all stay in the same layer, each neuron’s dendrites travel to other layers to interact with other cells. This stratification is very specific to each cell type, ensuring that the neurons are communicating with the correct partners as they relay visual information.

The researchers believe there may be still more types of neurons that did not appear in their data set and remain to be identified. In future work, they hope to examine larger sets of neurons in hopes of finding some of these other neuron types. They also hope to use their technique to study parts of the brain that have many layers of neurons — especially the neocortex, where most cognitive functions take place.

The research was funded by the Harvard NeuroDiscovery Center, the Howard Hughes Medical Institute, the Gatsby Charitable Foundation, and the Human Frontier Science Program.