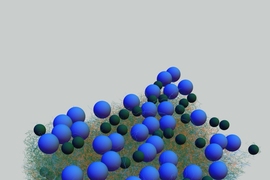 The human brain has 100 billion neurons, connected to each other in networks that allow us to interpret the world around us, plan for the future, and control our actions and movements. MIT neuroscientist Sebastian Seung wants to map those networks, creating a wiring diagram of the brain that could help scientists learn how we each become our unique selves.

In a paper appearing in the Aug. 7 online edition of Nature, Seung and collaborators at MIT and the Max Planck Institute for Medical Research in Germany have reported their first step toward this goal: Using a combination of human and artificial intelligence, they have mapped all the wiring among 950 neurons within a tiny patch of the mouse retina.

Composed of neurons that process visual information, the retina is technically part of the brain and is a more approachable starting point, Seung says. By mapping all of the neurons in this 117-micrometer-by-80-micrometer patch of tissue, the researchers were able to classify most of the neurons they found, based on their patterns of wiring. They also identified a new type of retinal cell that had not been seen before.

“It’s the complete reconstruction of all the neurons inside this patch. No one’s ever done that before in the mammalian nervous system,” says Seung, a professor of computational neuroscience at MIT.

Neurons in the retina are classified into five classes: photoreceptors, horizontal cells, bipolar cells, amacrine cells and ganglion cells. Within each class are many types, classified by shape and by the connections they make with other neurons.

“Neurons come in many types, and the retina is estimated to contain 50 to 100 types, but they’ve never been exhaustively characterized. And their connections are even less well known,” Seung says.

In this study, the research team focused on a section of the retina known as the inner plexiform layer, which is one of several layers sandwiched between the photoreceptors, which receive visual input, and the ganglion cells, which relay visual information to the brain via the optic nerve. The neurons of the inner plexiform layer help to process visual information as it passes from the surface of the eye to the optic nerve.

To map all of the connections in this small patch of retina, the researchers first took electron micrographs of the targeted section. The Max Planck researchers obtained these images using a technique called serial block face scanning electron microscopy, which they invented to generate high-resolution three-dimensional images of biological samples.

Developing a wiring diagram from these images required both human and artificial intelligence. First, the researchers hired about 225 German undergraduates to trace the “skeleton” of each neuron, which took more than 20,000 hours of work (a little more than two years).

To flesh out the bodies of the neurons, the researchers fed these traced skeletons into a computer algorithm developed in Seung’s lab, which expands the skeletons into full neuron shapes. The researchers used machine learning to train the algorithm, known as a convolutional network, to detect the boundaries between neurons. Using those as reference points, the algorithm can fill in the entire body of each neuron.

“Tracing neurons in these images is probably one of the world’s most challenging computer vision problems. Our convolutional networks are actually deep artificial neural networks designed with inspiration from how our own visual system processes visual information to solve these difficult problems,” Turaga says.

If human workers were to fill in the entire neuron body, it would take 10 to 100 times longer than just drawing the skeleton. “This speeds up the whole process,” Seung says. “It’s a way of combining human and machine intelligence.”

The only previous complete wiring diagram, which mapped all of the connections between the 302 neurons found in the worm Caenorhabditis elegans, was reported in 1986 and required more than a dozen years of tedious labor.

“I think this is going to be a really significant paper in the history of how we study complex systems,” says Richard Masland, a professor of ophthalmology at the Massachusetts Eye and Ear Infirmary, who was not part of the research team. “This paper identifies circuit motifs that are interesting but really are just symbolic of the many types of questions that could be answered using these techniques.”

Wiring diagrams allow scientists to see where neurons connect with each other to form synapses — the junctions that allow neurons to relay messages. By analyzing how neurons are connected to each other, researchers can classify different types of neurons.

The researchers were able to identify most of the 950 neurons included in the new retinal-wiring diagram based on their connections with other neurons, as well as the shape of the neuron. A handful of neurons could not be classified because there was only one of their type, or because only a fragment of the neuron was included in the imaged sample.

“We haven’t completed the project of classifying types but this shows that it should be possible. This method should be able to do it, in principle, if it’s scaled up to a larger piece of tissue,” Seung says.

In this study, the researchers identified a new class of bipolar cells, which relay information from photoreceptors to ganglion cells. However, further study is needed to determine this cell type’s exact function.

Seung’s lab is now working on a wiring diagram of a larger piece of the retina — 0.3 millimeter by 0.3 millimeter — using a slightly different approach. In that study, the researchers first feed their electron micrographs into the computer algorithm, then ask human volunteers to check over the computer’s work and correct mistakes through a crowd-sourcing project known as EyeWire.

The research was funded by the Max Planck Society, the Howard Hughes Medical Institute and the Gatsby Charitable Foundation.

In this New York Times video, Zach Wise reports on EyeWire, the citizen neuroscience game developed by MIT researchers to map the human brain. “In order to look at the structures of neurons, we have to analyze images, a lot of images. Those images can’t be analyzed completely automatically by computers; we actually need human intelligence,” Sebastian Seung explains.

New York Times reporter James Gorman explains how EyeWire, the citizen science game developed at MIT to map the human brain, works. “Anyone can sign up online, learn to use the software and start working on what Amy Robinson, the creative director of Eyewire, calls a ‘3-D coloring book,’” Gorman writes.

NBC News takes a look at EyeWire, a video game to map the human brain designed by Professor Sebastian Seung’s lab at MIT. Through the game, players from around the world map the 3D structure of neurons.